Wachtell Lipton Rosen & Katz is heading into the year’s final quarter outpacing all other law firms in the dollar value of global mergers and acquisitions on which it’s served as an adviser.

The firm has worked on 52 transactions worth a combined $517 billion through Q3 2019, which saw fewer deals and a smaller average deal size than the same period a year prior, Bloomberg data show.

Kirkland & Ellis LLP lags more than $100 billion behind Wachtell’s total deal value, but the 480 mergers and acquisitions it has advised on in any capacity are the most among its peers.

The $2.8 trillion value of worldwide deals in the first three quarters of this year is a 10.6 percent drop from the deal value reported between Q1 and Q3 2018. The aggregate amount of transactions has also experienced a year-over-year decline.

But megadeals, worth $10 billion or more, are on the rise, jumping almost 19 percent since the first three quarters of last year. Mylan NV’s planned $32.6 billion purchase of one of Pfizer Inc.'s medical businesses, as well as London Stock Exchange Group PLC’s pending $27 billion acquisition of Refinitiv Holdings Ltd., helped bolster that growth. 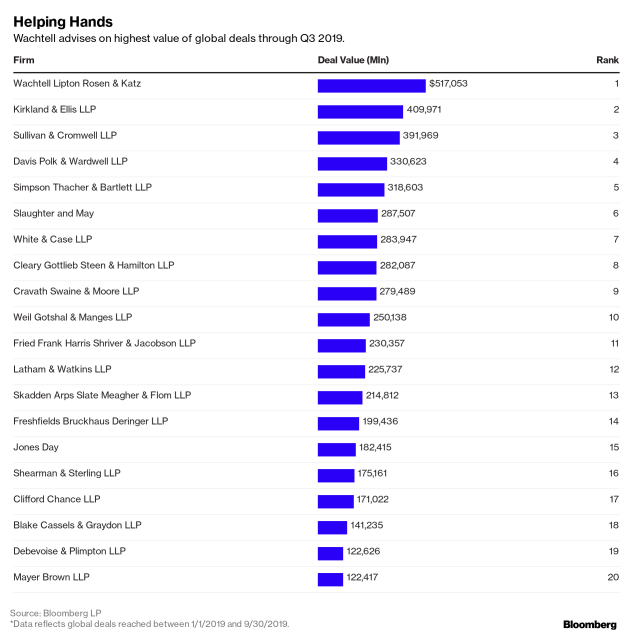 Kirkland’s grasp of the second-largest deal value through Q3 2019 is a significant leap from the same period last year, when it ranked 15th according to Bloomberg data.

The firm also holds the second-biggest market share — 14.8 percent — among firms based on worldwide deal value. Only Wachtell, at 18.7 percent, controls a larger piece of the market.

Sullivan & Cromwell’s 14.2 percent market share landed the firm just behind Kirkland and made it one of nine deal advisers with a dollar value-based market share greater than 10 percent. Just two firms, White & Case LLP and Kirkland, both have a top-10 global deal value and deal count heading into Q4 of this year. 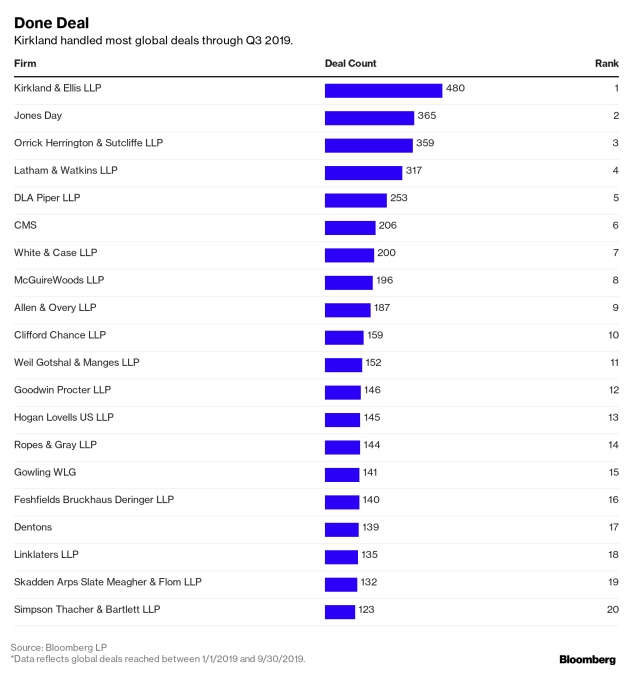 Jones Day continued to build on a strong first half of 2019 by pushing its deal count to 365 and edging out Orrick Herrington & Sutcliffe LLP, which had the third-highest total. Latham & Watkins LLP was 42 deals short of Orrick at the end of Q3 2019, but topped DLA Piper LLP’s 253 global deal count.

For deals on which law firms served as the principal adviser to a party, Wachtell worked on the largest collective dollar value as of Sept. 30. Kirkland had the highest deal count as principal.

Cross-border deals made up more than 36 percent of all transactions announced during the first three quarters of 2019. Freshfields Bruckhaus Deringer LLP advised on cross-border mergers and acquisitions valued at a collective $122.1 billion, the most of any firm. Simpson Thacher & Bartlett LLP tallied the second-largest total with $116.7 billion.