Social bonds that fund do-good projects are lighting up the debt market, driving investors to extend on faith into the increasingly popular offering with few boundaries on how they’re labeled and used.

Issuance of such bonds, mostly by governments, development banks, and multi-national organizations like International Financial Corp., has steadily grown in recent years. They have funded a range of causes, including educational equity, access to affordable transportation, and food supply protection. Pandemic-driven projects also helped to spur social bond issuance’s eye-popping jump last year to roughly $154 billion from $17.9 billion a year earlier, according to Bloomberg data.

The Biden administration’s focus on climate change and diversity is expected to further fuel interest in socially conscious investments. And few expect demand to wane from institutional funds, which are increasingly pushed by investors to allocate money into certain causes.

Regulations on reporting and issuance for the bond market still apply to social bonds. But more specific rules—such as when a bond can be labeled a “social” bond, and oversight of use of proceeds for do-good goals—are scant. Investors largely have to trust that bond issuers will use the capital raised for a stated purpose and will be upfront about their progress.

“It’s a bit of a trust exercise in a sense, until there are unifying ESG disclosure and reporting standards,” said Simone Andrews, an ESG analyst for Bloomberg Intelligence. The current system, largely based on voluntary guidelines, “looks nice and pretty, but it’s not something that’s regulated.”

Some market watchers have started questioning whether an uptick in popularity might spark regulators’ further attention, while others counter that the social bond sector has effectively self-regulated. An international push to standardize rules on what qualifies as an ESG-focused bond also has fanned market speculation that more government involvement could be around the corner. 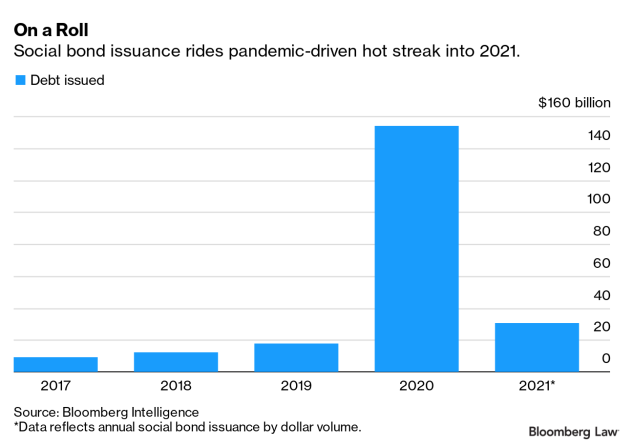 For now, the social bond market leans heavily on external reviews, nonbinding guidelines, and a fear of reputational harm to encourage transparency and stave off any potential misuse of proceeds.

“Regulation would need to catch up to what the market has already done,” said Chris McGarry, a London-based partner at White & Case LLP.

Meanwhile, demand for social bonds regularly outpaces supply, driving even relatively new entrants like companies and nonprofits, such as JPMorgan Chase, the Ford Foundation, and Bank of America, to consider the market.

New offerings regularly have been oversubscribed, sometimes as much as tenfold.

These bonds have closely tracked the trajectory of their environmentally focused counterparts, green bonds—used to fund clean energy projects or similar endeavors. Debt issuance focused on tackling projects with both social and environmental goals has also surged, with Goldman Sachs and others pricing so-called sustainable bonds.

Issuers are largely left on their own to commit to disclosure and reporting timelines for funded projects, and to determine how quickly cash will be dispersed. Investors must then determine for themselves how they might hold issuers accountable if they don’t follow through on their stated goals.

“In terms of which bonds are labeled as social, there are some investor concerns there,” Andrews said. “The more transparency, disclosure, and impact reporting that investors have, the more they’ll be willing to pile into this space.”

The market now leans heavily on nonbinding social bond principles from the International Capital Market Association, a trade group that promotes self-regulation, when assessing social bond details, funded projects, and the issuer’s past approach to environmental, social, and governance matters.

According to ICMA, bond-funded projects should provide a clear social benefit, though the organization doesn’t define what makes a project socially beneficial. The Zurich-based association also calls on issuers to clearly communicate their social objectives, as well as their process for choosing projects.

ICMA also says bond proceeds should be closely monitored, and updates should be provided annually. Second-party reviews of compliance with the principles also are highly encouraged.

A large portion of recent issuers adhered to ICMA principles, according to Bloomberg Intelligence.

But data from S&P Global Research suggested that during the pandemic’s early stages, several issuers rolled out Covid-19-focused and other self-labeled social bonds that weren’t reviewed by outside parties or aligned with the voluntary guidelines.

Further government intervention may be ahead considering the bonds’ rising popularity. The EU and other inter-governmental groups are pushing for harmonization around green bonds and other sustainable finance offerings, driving speculation that the development of widely used standards for social bonds could be next in line.

“Regulators and standard setters are trying to take into account a huge uptick in interest and issuance in these bonds,” said Stephen Park, a University of Connecticut business school professor who researches ESG investing and corporate social responsibility.

“If there are prominent instances of funds being unequivocally misused, that would have the potential to hinder the expansion of this market,” Park said. “To date, there haven’t been such instances, but that’s not to say that there isn’t still a risk of false claims or the omission of information. And that may lead to questions about whether there’s a need for more disclosure.”

The Securities and Exchange Commission under President Joe Biden is expected to push for more disclosures of how companies approach ESG issues. Those are, for now, largely focused on corporate outcomes, not how a bond issuer uses sale proceeds.

“It’s a case of the market leading, and then regulation stepping in and supporting that,” McGarry said.

Many recent social bond issuers have enlisted outside firms to gauge their adherence adhere to the ICMA principles, and to closely review the underlying project to ensure that it’s set up for success and transparency.

One purpose of these reviews, and voluntary guidelines, is to dispel the fear of “social washing,” the use of funds for non-socially conscious projects. In-depth, external reviews of social bond structure are often described as a key safeguard against that risk. And business is surging for some firms providing the service.

“I think people are very concerned about the potential for social washing. As the market grows, making sure social bonds are aligned with the issuers’ own social impact strategy will be important,” said Bloomberg Intelligence’s Andrews.

Jonathan Laski, Sustainalytics’ associate director of sustainable finance, said the firm handled 22 second-party opinions for social bond sales last year, more than double that of 2019. Those bonds came from 15 different countries and a much broader group of issuers than previous years.

“Our view is that if an issuer doesn’t get a second-party review, are they truly looking to be aligned with those principles?” Laski said. “The larger this market grows, the more emphasis there is on the reporting side.”

Some market participants see the massive interest in social bonds as a sign that the system largely works as is, without further rules.

“It’s a question of ‘Are you a believer that capital markets can solve these issues, or is regulation needed to solve them?’” said Chad Spitzer, founder of research firm Third Economy.

Spitzer’s firm recently launched an advisory group with Broadridge Financial Solutions Inc. that’s working with issuers and asset managers on sustainability strategies and how best to position their ESG programs.

The lack of compliance guarantees and uniformity in bond terms mean investors have to do their homework. Social bonds tied to pandemic-response efforts generally haven’t included binding language governing use of proceeds. They also generally don’t contain second-party review demands or penalties for not achieving any social goals.

“There’s a varying level of comfort on the investor side,” said Spitzer. “Some investors are going to be stricter than others with this.”