won the Securities and Exchange Commission’s support to help get more women and minorities on boards of companies trading on the stock exchange.

The SEC gave its approval of a Nasdaq board diversity proposal in an order posted on the agency’s website Friday. The endorsement is among the agency’s most substantial actions taken to encourage diversity and inclusion since it made environmental, social and governance matters a top priority under the Biden administration.

“Organizations are stimulated by different carrots and sticks,” and the SEC’s decision “takes the conversation from ‘this would be nice’ to ‘this is a business imperative,’” , executive director at The Board Challenge, which works to increase the representation of Black corporate directors, said in an interview. “It may be a stick, but it’s also a sign that diversity is important. Nasdaq and the SEC wouldn’t endorse it if it wasn’t.”

Nasdaq’s plan is the most significant diversity requirement in the U.S. since California passed laws in 2018 and 2020 that mandated diverse boards for companies headquartered in the state. The exchange will direct its listed companies to pursue board diversity -- by having at least one female board member and at least one who identifies as a member of an underrepresented minority or LGBTQ -- or explain why they don’t.

“These rules will allow investors to gain a better understanding of Nasdaq-listed companies’ approach to board diversity, while ensuring that those companies have the flexibility to make decisions that best serve their shareholders,” SEC Chair said in a Friday. The new Nasdaq disclosure requirements will provide “consistent and comparable data when making decisions about their investments.” 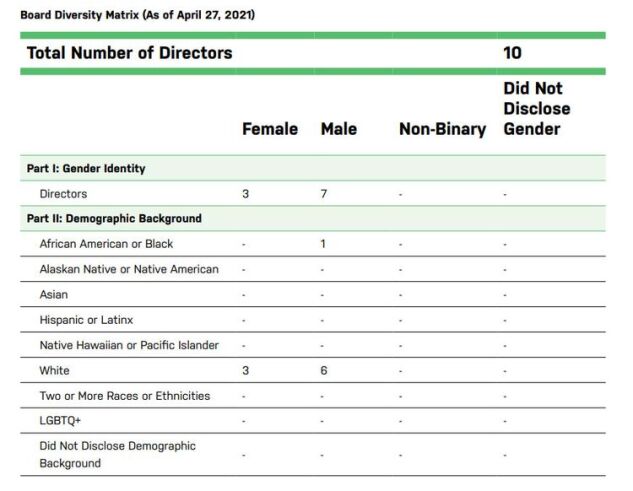 Nasdaq waited almost eight months for a decision from the SEC’s Division of Trading and Markets. The division had as long as 240 days to approve or turn down the plan on behalf of the agency’s commissioners.

“We are pleased that the SEC has approved Nasdaq’s proposal to enhance board diversity disclosures and encourage the creation of more diverse boards through a market-led solution,” Nasdaq said in a .

With the step, Nasdaq will require companies to meet its diversity rules within four years of the SEC’s endorsement. Exceptions would apply to small or foreign boards, but they will still have to show some diversity. When the proposal was first announced in December, only about a quarter of Nasdaq-listed companies met the proposed standard.

The California diversity law requires all companies based in the state to meet the same diversity requirements as Nasdaq or face fines starting at $100,000.

in 2020 said it the initial public offerings of companies lacking at least one diverse member after July of that year. As of last month, the requirement was two diverse members.

Critics of diversity quotas say they lower standards and give unfair advantages to people based on their race, ethnicity or gender. Supporters of the effort say it encourages companies to look beyond the usual makeup of boards with family and friends of founders or executives that skew to largely White and male.

Republicans on the Senate Banking Committee urged the SEC to reject the rule, arguing it’s not Nasdaq’s role to “act as an arbitrator of social policy or force a prescriptive one-size-fits-all solution upon markets.” The has said it has no plans for a similar rule.

“Corporate boardrooms, like all organizations, can benefit from a diversity of perspectives, but Nasdaq’s one-size-fits-all quota misses the mark,” Republican , the ranking member of the Senate Banking Committee, said in a statement after the SEC’s decision. “By defining diversity by race, gender and sexual orientation, Nasdaq’s mandate will inevitably pressure companies to subordinate crucial factors such as knowledge, experience and expertise when selecting board members.”

The new Nasdaq rules won the backing of the SEC’s three Democratic commissioners, including Gensler.

“While I support the goal of having more diverse and inclusive boards of directors, a noble goal does not justify short-changing the agency’s legal obligations,” , a Republican member of the commission, said in a statement Friday.

In response to criticism, Nasdaq agreed to offer more flexibility for small boards, companies new to the exchange or existing members with a vacancy that puts them out of compliance.

Nasdaq has stressed that the requirements are not a quota or mandate because companies that explain their lack of board diversity aren’t forced to make changes. Under the new rule, companies listed on Nasdaq would be required to disclose the makeup of their boards, opening up membership trends to public scrutiny.

The lack of diversity on boards “is not a pipeline problem, it is a perception challenge,” Tucker said.

The exchange had nearly 85% support for its plan among the more than 200 submissions during the SEC’s comment period, including notes of backing from Chief Operating Officer and U.S. Senators and .

Representatives from , and the Robin Hood foundation also signed on in support of the proposed rule changes.

“Corporations that lead on equity and inclusion become more durable, have greater resonance with America’s diverse consumer markets, and are more creative and competitive in the global marketplace,” Robin Hood Chief Executive Officer wrote in his comment.

(Updates with SEC commissioner’s dissent in third paragraph after ‘One Size’ subheadline. An earlier version of this story corrected name of organization in last two paragraphs.)

To contact the reporters on this story:
in New York at kdoherty23@bloomberg.net;
in Southfield, Michigan at jgreen16@bloomberg.net