Elon Musk, chief executive officer of Tesla Inc., speaks during an event at the site of the company's manufacturing facility in Shanghai, China, on Monday, Jan. 7, 2019.
Photographer: Qilai Shen/Bloomberg

Elon Musk is facing a new round of regulatory trouble for tweets about Tesla Inc., raising fresh concerns about the chief executive officer’s ability to keep his impulses in check and responsibly run a public company.

The U.S. Securities and Exchange Commission Feb. 25 asked a judge to hold Musk in contempt for violating a settlement that required him to get Tesla’s approval before communicating material information to investors. He breached that deal with a Feb. 19 tweetthat said Tesla would make about half a million cars in 2019, the agency claims. The CEO posted a few hours later that deliveries would only reach about 400,000. 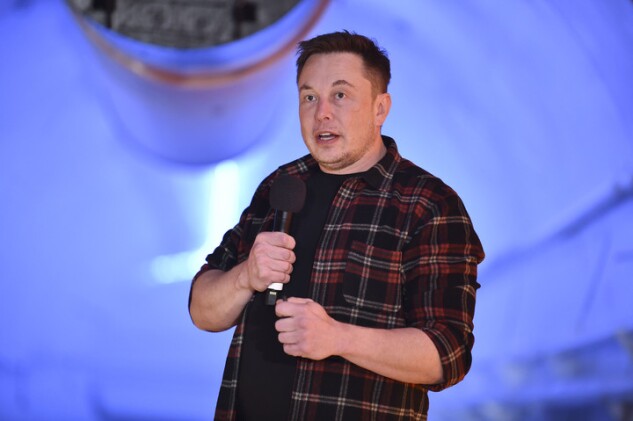 The SEC’s move, which sent Tesla shares down about 2.5 percent shortly after the start of regular trading Feb. 26, puts Musk in fresh legal peril less than five months after he settled claims he misled investors with tweets about taking the electric-car maker private. He could face a variety of penalties, with the stiffest being that he’ll be barred from running Tesla or any other public company for a period of time, said Charles Elson, director of the John L. Weinberg Center for Corporate Governance at the University of Delaware.

“Having your CEO in contempt of an SEC action is a pretty bad thing,” Elson said in a phone interview. “They settled with him and within a few months he’s back to doing similar things. It’s unbelievable.”

Calls to Tesla and emails to Musk and his representative weren’t immediately returned. In tweets after the filing, Musk criticized the SEC and said it had overlooked comments he made on the company’s Jan. 30 earnings call that Tesla may make as many as 500,000 of its Model 3 sedans this year.

U.S. District Judge Alison Nathan, who is handling the case, hasn’t scheduled a hearing to weigh the contempt request. On Feb. 26, she told Musk to file a brief responding to the SEC by March 11.

Losing Musk, the principal architect of Tesla’s vision of a future where electric vehicles and solar power reduce humanity’s dependence on greenhouse gases, would be gutting for the company. The automaker has relied on its CEO not just for technology leadership but for its bold, anti-establishment image.

But the cult of personality has also had a downside for Tesla, with Musk sending the stock into a tailspin after antics such as smoking marijuana during a podcast interview or insulting analysts on a conference call.

“Musk continues to be reckless with Twitter,” said Gene Munster, a managing partner at venture capital firm Loup Ventures. “If you were hoping for him to change, it’s clear that it’s not going to happen. It’s unfortunate because it’s a needless distraction from the company’s world-class product line.”

Tesla shares were already down 10 percent this year through the close of regular trading Feb. 25. 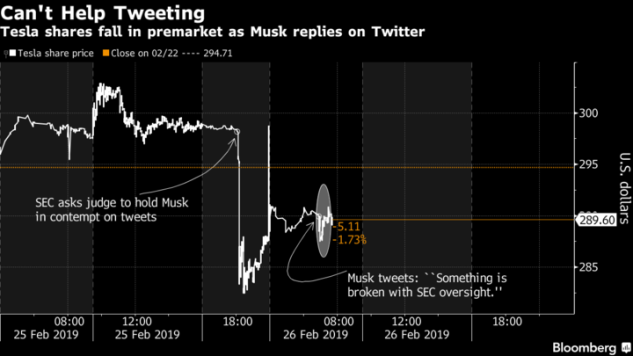 Musk was subject to regulatory scrutiny in August soon after posting on Twitter that he was considering taking the company private at $420 a share and had funding secured. In its September lawsuit, the SEC said Musk hadn’t discussed any specific deal terms with any funding partners and knew the potential transaction was uncertain. The accord required Musk and the company to each pay a $20 million penalty and also barred him from serving as chairman for three years.

Statements tied to the Model 3, Tesla’s lower-priced electric car, have also caught the SEC’s attention. The agency and the Justice Department have both sought information from Tesla over forecasts made about Model 3 production in 2017, when the carmaker started making the sedan but fell well short of Musk’s projections.

The SEC alleged Feb. 25 that Musk “once again published inaccurate and material information about Tesla to his over 24 million Twitter followers, including members of the press, and made this inaccurate information available to anyone with Internet access.”

The next day, Tesla announced that its general counsel was leaving, just two months after the company hired him.

The SEC “has to view the conduct as akin to another violation of securities laws to take this step,” said Brad Bennett, a former SEC enforcement attorney. “It’s a very novel situation where someone is running an enterprise with this kind of market cap and gives the SEC cause for concern that the person is not capable of following the securities laws.”

In its defense, Tesla lawyers said Musk was trying to “recapitulate” a pre-approved statement from the company’s earnings call, stating that the company would get production to 10,000 vehicles a week by the end of the year, according to the attorneys’ Feb. 22 letter to the SEC included in court filings Feb. 25.

The company’s attorneys stressed that Tesla and Musk take seriously their responsibility under the settlement reached with the SEC last year to review communications about securities issues made through Twitter and other social media.

“Although the 7:15 PM EST tweet was not individually pre-approved, Mr. Musk believed that the substance had already been appropriately vetted, pre-approved, and publicly disseminated,” they wrote to the agency.

When Tesla’s designated securities counsel who monitors Musk’s Twitter account saw the tweet, the attorney immediately arranged to meet with Musk at the carmaker’s Fremont, Calif., plant. Together, they drafted a clarifying tweet, according to the letter.

Since agreeing to the settlement, Musk has repeatedly antagonized Wall Street’s main regulator. A few days after the Sept. 29 agreement, he dubbed the SEC the “Shortseller Enrichment Commission” in a tweet. In December, Musk told Lesley Stahl of CBS’s “60 Minutes” that he didn’t respect the agency.

“It’s very clear that the SEC is not happy with Musk,” said Stephen Diamond, an associate professor of law at Santa Clara University who specializes in corporate governance. “Musk is on a self-destructive path. He’s the controlling stockholder but he’s not respecting the rights of other shareholders.”

With assistance from Cecile Daurat, Chester Dawson and Elisabeth Behrmann

To contact the editors responsible for this story: David Glovin at dglovin@bloomberg.net David Welch, Frank Connelly