Willett, a “Tweeter Laureate” praised by conservatives and libertarians, is on Trump’s list of potential nominees. 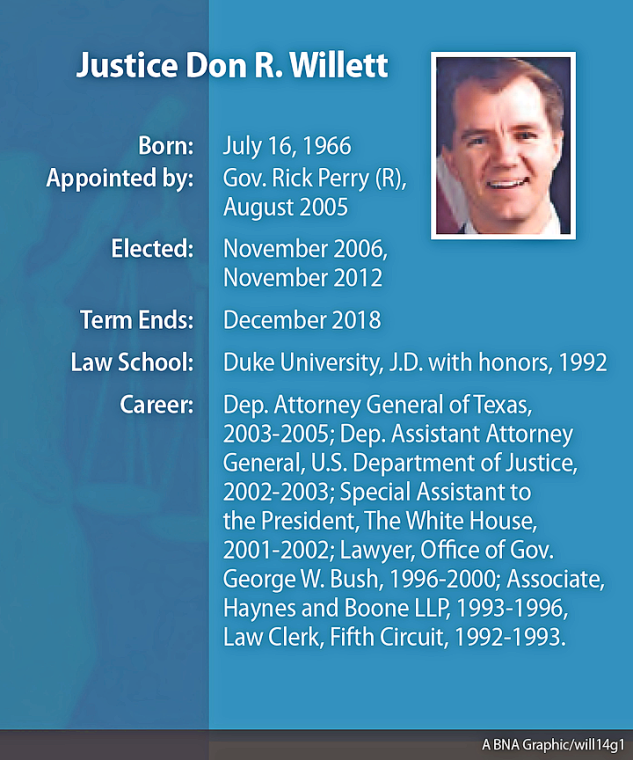 Trump has said he will choose someone from that list to replace Justice Antonin Scalia, who died unexpectedly Feb. 13.

Conservatives and libertarians have praised Willett as a defender of economic liberty.

Patel invalidated a state requirement that eyebrow threaders finish 750 hours of training to receive a license to practice their trade.

The “right to engage in productive enterprise is as central to individual freedom as the right to worship as one chooses,” Willett said.

Willett cited abolitionist and former slave Frederick Douglass’s happiness at being able to earn money after being freed.

“Self-ownership, the right to put your mind and body to productive enterprise, is not a mere luxury to be enjoyed at the sufferance of governmental grace, but is indispensable to human dignity and prosperity.”

Regulations that restrict economic liberty should be examined under a “rational basis with bite” test that demands “actual rationality, scrutinizing the law’s actual basis, and applying an actual test,” Willett said.

Willett is known for his social media prowess, and was named “Tweeter Laureate of the 84th Texas Legislature” by the Texas House of Representatives.

His tweets are often humorous.

But they also have a practical end—staying in touch with voters.

In “a state of 26 million people, 254 counties” and “a couple of timezones,” it’s “really political malpractice not to connect and engage voters smartly through social media,” Willett told Fox News in an interview posted on his campaign website.

Willett’s love of Twitter is a point of commonality with Trump, who also used it as a campaign tool.

But Willett hasn’t been afraid to poke fun at the president-elect.

One tweet, written as a haiku before Willett was named on Trump’s list, asked who “the Donald” would name to the high court.

Texas Governor Greg Abbott (R) last year said that Willett would be a good choice for the high court because he’s “a proven conservative who won’t rewrite law.”

The conservative Weekly Standard praised Willett, saying he believes “that judicial duty means taking the Constitution, its liberties, and its limits seriously—not putting a pro-government thumb on the scale.”

Willett served on the advisory board for the Austin, Texas chapter of the Federalist Society—"a group of conservatives and libertarians” who believe “that the state exists to preserve freedom” and “that the separation of governmental powers is central to our Constitution.”

Willett agrees with the organization that the judiciary shouldn’t legislate from the bench.

The Texas native served as an attorney for then-Governor Bush from 1996 to 2000.

Willett then followed Bush to the White House, serving as his special assistant before becoming a deputy assistant attorney general at the Department of Justice.

To contact the reporter on this story: Patrick L. Gregory in Washington at pgregory@bna.com

To contact the editor responsible for this story: Jessie Kokrda Kamens at jkamens@bna.com