An unprecedented fight over who should sit on the board of Exxon Mobil Corp. is turning into a referendum on Chief Executive Officer as a decades-long struggle by climate campaigners comes to a head.

Activist investor Engine No. 1 LLC wants to replace one-third of Exxon’s board in an effort to force the Western world’s largest oil explorer to embrace a transition away from fossil fuels and end a decade of what it calls “value destruction.” Shareholders are set to gather — virtually — for their annual meeting on May 26.

The stakes are high. Under Exxon’s bylaws, a victory for any dissident director would mean an incumbent must step down, equating to a zero-sum proxy contest: of 16 candidates, only 12 will prevail. Any dilution of Woods’s influence over the board could derail his long-term plans and force strategic and tactical changes he has previously rejected.

Although Engine No. 1 hasn’t targeted Woods for removal, even a partial victory for the activist would be a serious, and perhaps fatal, blow to his leadership, according to , a coalition of environmentally active investors managing $37 trillion.

“I don’t see how Darren Woods remains as CEO if one of the dissidents, let alone all four, are elected,” said , director of oil and gas at . “It would be such a sign of fundamental dissatisfaction with the status quo that something would have to change. And that starts with the CEO.” 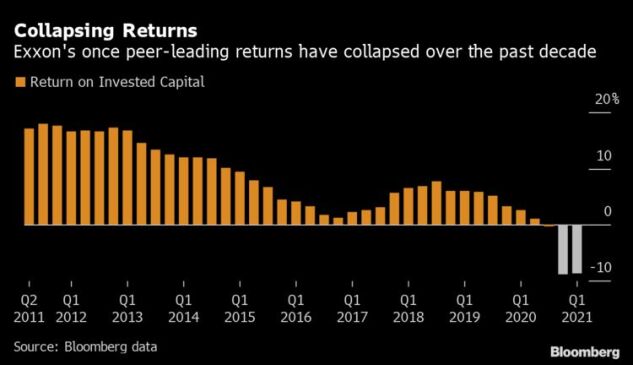 Exxon’s engagement with environmental activists was once characterized by a sense of bemusement — under former CEO , Greenpeace protesters outside its annual meetings were offered . But as worries about climate change have gone mainstream in the investment world, the clash has evolved into a confrontation over boardroom seats.

In other corners of the commodities sector, shareholders this year have already shown frustration with executives’ reluctance to embrace tough environmental goals. DuPont de Nemours Inc. suffered an 81% against management on plastic-pollution disclosures, while ConocoPhillips a contest on adopting more stringent emission targets.

Exxon’s meeting this year threatens to be one of the stormiest on the U.S. corporate calendar, made all the more remarkable for being instigated by a newly formed fund that only has a $54 million, or 0.02%, stake in the oil behemoth.

Investor dissatisfaction with the company largely centers on two issues that are becoming more interlinked: climate change and profits. The oil giant envisages a profitable, long-term future for fossil fuels, but sees no point in investing in traditional renewable energy businesses. It also refuses to commit to a net-zero emissions target, unlike European rivals. 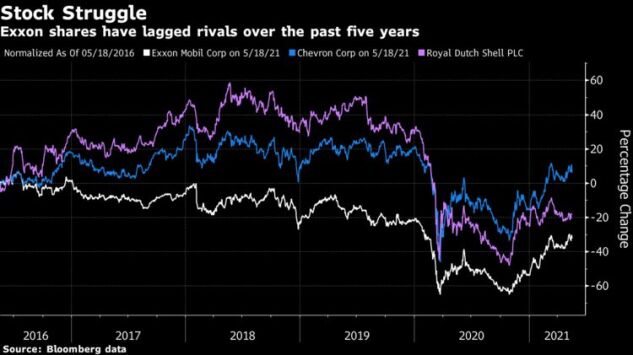 Climate concerns are are resonating more deeply with investors at the same time that Exxon’s status as a financial powerhouse crumbles after multiple corporate missteps, some of which preceded Woods’s elevation to CEO in 2017. Returns on invested capital are a fraction of what they were in Exxon’s heyday a decade ago and debt ballooned 40% last year as Covid-19 paralyzed economies and energy demand around the world.

Under mounting pressure and concerns over Exxon’s ability to pay the S&P 500’s third-largest dividend, the CEO slashed an ambitious $200 billion expansion program by a third late last year. It was a relief to some investors who had questioned both the cost and the need for such projects at a time when policymakers — and even rivals like BP Plc and Royal Dutch Shell Plc — are planning for the twilight of the petroleum era.

Still, Engine No. 1 says Exxon needs higher-quality directors who are willing to challenge management. Exxon missed key industry trends such as the shale revolution, “the shift to focusing on project returns over chasing production growth, and the need to gradually prepare for rather than ignore the energy transition,” according to the San Francisco-based activist.

Top 20 shareholder Legal & General Investment Management, a previous critic of Exxon, is also backing Engine No. 1 and has pledged to vote against Woods. However, the voting intentions of some other major investors, such as , and aren’t clear — all three declined to comment when contacted by Bloomberg News. Norway’s giant sovereign wealth fund saidlate last week that it would support the reelection of most Exxon directors, but not Woods, part of its long-standing push to separate the roles of CEO and chairman at Exxon.

With such animosity brewing, the usual course of action would be for Exxon’s board to meet with the activists and hash out a compromise. But that has yet to happen, and both sides appear to be entrenched.

Exxon said in a May 14 letter to shareholders its board “listens and responds to shareholder feedback,” but that Engine No. 1, founded only a few months ago, wasn’t interested in engaging and “is trying to replace four of our world-class directors with unqualified nominees.’' The company added that the activist fund’s plans would “derail our progress and jeopardize your dividend.”

In another letterto shareholders on Sunday, Exxon said that over the next 12 months it plans to name two new directors, one with energy industry and one with climate experience.

Exxon did talk with another investor, hedge fund D.E. Shaw & Co., which built a stake in an effort to push for change. Those discussions led to the appointment of the new directors, including activist investor Jeff Ubben. The oil company has also announced new emissions targets, started a low-carbon business, and supported policies that will help technological innovations like carbon capture.

In some respects Exxon is in a better position that it was at the start of 2021. Its stock has rallied more than 40% as oil prices rebounded and lockdowns are eased. Engine No. 1 points to its involvement as the turning point, while Exxon claims the market is rewarding prudent cost cutting and high-return investments made over the last couple of years. The forthcoming vote will help to determine which side of the debate other investors lean toward.

“There’s a governance challenge at Exxon,” said , head of U.S. sustainable investments at Legal & General. “How seriously is the current board questioning management’s business model? It’s important to add urgency to the debate.”

(Updates with comments from letter to shareholder in 17th paragraph)

To contact the author of this story:
in Houston at kcrowley1@bloomberg.net

To contact the editor responsible for this story:
at scasey4@bloomberg.net