Shareholders have filed at least 36 proposals on racial issues at companies’ annual meetings this year after at least 14 in 2021. Proposals at Chevron, Alphabet, and several other companies are still pending.
PATRICK T. FALLON/AFP via Getty Images

Alphabet, Chevron, and other corporate giants are facing investor pressure to look at racial issues, as more shareholders and companies want to know whether their businesses fuel discrimination.

At least five companies—, , , and government contractor Maximus Inc.—have seen shareholder proposals demanding racial equity or civil rights audits pass this year, according to Bloomberg Intelligence data. Companies can use the audits to assess how they’re living up to commitments to promote civil rights or equity among their employees and customers, among other purposes.

Proposals at Alphabet, Chevron, and several other companies are still pending.

A company could hurt its bottom line if it doesn’t want to conduct a racial audit, said former Attorney General Eric Holder, who said his work on the assessments has ramped up after the 2020 murder of George Floyd.

“There is a potential price to be paid in terms of market share, reputational damage, if an unrecognized and unaddressed problem surfaces,” said Holder, a senior counsel at Covington & Burling LLP. “The impact of those things, I think, can’t be understated.” 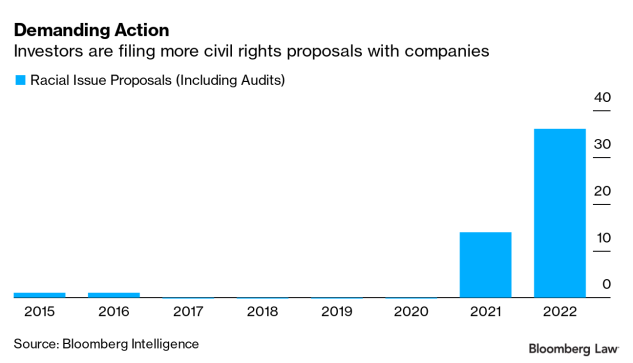 Shareholders have filed at least 36 proposals on racial issues at companies’ annual meetings this year after at least 14 in 2021. Most specifically call for racial equity or civil rights audits, though some seek other reports related to diversity.

All the proposals are advisory and don’t require a company to act if they pass. But their proliferation on proxy ballots is giving advocates more opportunities to press companies on their commitments to racial equity and forcing businesses to explain why they haven’t done audits already.

and should know soon whether a majority of their shareholders want racial equity audits.

Chevron is opposing an audit proposal from Sisters of St. Francis of Philadelphia, a Roman Catholic order of nuns known for promoting corporate social responsibility. The proposal, which is under consideration at Chevron’s annual meeting Wednesday, urges the company to analyze and report on whether its policies and practices discriminate or have a disparate effect on people of color. The proposal cited concerns that Chevron’s greenhouse gas emissions and oil leaks can disproportionately harm non-White communities.

“Racial inequity and environmental racism are systemic risks that threaten society and the economy,” the proposal said.

A Chevron representative didn’t respond to requests for comment. But the company disputed claims it’s complicit in racism and said it’s committed to racial equity in its proxy statement.

Alphabet is opposing a similar proposal submitted by the Nathan Cummings Foundation, a grantmaker and investor that works to combat climate change and inequality. The proposal, up for a vote at Alphabet’s June 1 annual meeting, asks the company behind Google and YouTube to examine adverse effects it has on Black and indigenous people, as well as other communities of color. A report on the findings should follow, according to the proposal.

The company has some “real blind spots” on the adverse effects its operations and products have on people of color, said Laura Campos, director of corporate and political accountability at the Nathan Cummings Foundation.

An Alphabet representative responded to a Bloomberg Law request for comment by sharing the company’s proxy statement. The company already is meeting the aims of the proposal through its commitments, action and disclosures related to racial equity, according to the filing.

The audits sought at Alphabet, Chevron, and other companies first gained significant attention with in 2016.

The company did one following concerns that Black users often were unable to book home rentals. Airbnb required hosts to agree to a policy prohibiting discrimination against guests after the assessment.

also was an early adopter of the audit, commissioning one after a manager called the police on two Black men waiting to begin a business meeting at a store in 2018. The coffee chain closed thousands of locations for anti-bias training following its assessment.

Companies are taking these audits seriously, said Paul Washington, the executive director of the Environmental, Social and Governance Center at the Conference Board, a business think tank.

“They’re going beyond simply conducting an audit that would check the box,” he said.

Audits eventually caught on with shareholders who started proposing them at companies’ annual meetings in 2021.

The racial equity audit proposal at garnered 39% of shareholders’ support, while the one at secured 44% of investors’ backing, according to Bloomberg Intelligence data. The Amazon proposal got more support from shareholders than any other audit voted on last year.

Citi said in October it agreed to an audit that would examine its 2020 commitment to drive $1 billion into work closing the racial wealth gap among Americans. Amazon then said last month it would measure any racial disparities its policies, programs, and practices have on its US hourly employees.

“Even if you don’t get it, but you’re hitting that 30, 40% mark, that’s often a mandate,” said Elizabeth Gonzalez-Sussman, an Olshan Frome Wolosky LLP partner who leads the law firm’s ESG activist investing work.

Shareholder approval has been even higher this year.

Apple, J&J, Waste Management, Altria and Maximus all had racial equity proposals that surpassed 53% of shareholder support, despite calls by the companies to vote them down.

Altria understands the importance of engaging on efforts to equitably reduce tobacco harm and prevent underage smoking, as well as other ESG expectations, company spokesman Steve Callahan said. The Marlboro maker will consider the proposal as it continues its conversations with investors, he said.

Waste Management still is evaluating the audit proposal passed at its annual meeting and how best to continue its work advancing diversity, equity, and inclusion, a company representative said.

Maximus, which helps administer Medicaid and Medicare, should have an audit of its impact on non-White stakeholders, according to the proposal passed by its investors. Maximus previously had an audit of its human resources policies and practices related to racial equity and will “build on this work to further analyze and improve our business through a racial equity lens,” company spokeswoman Eileen Rivera said in a statement.

Apple and J&J have yet to announce any plans after the votes. The companies didn’t respond to requests for comment.

“At this point, the ball is in the court of the companies,” said Dieter Waizenegger, executive director of SOC Investment Group, which filed the Apple proposal. “Shareholders are going to watch what the companies are doing and the quality and the seriousness they’re applying to this process.”

To contact the editors responsible for this story: at csaenz@bloombergindustry.com; at mferullo@bloomberglaw.com