BlackRock Inc. remains at the center of a burgeoning debate over ESG investing strategies.
Photographer: Simon Dawson/Bloomberg via Getty Images

The battle over ESG investing that has enmeshed BlackRock into a Republican-led political squabble is galvanizing a grassroots, letter-writing campaign that stretches across the country.

BlackRock Inc. has found itself on the defensive since Florida announced in early December that it would pull $2 billion of assets from the money manager—the biggest financial move by a red state with concerns about ESG. Other states including Arkansas, Louisiana and Missouri have previously said they’ll pull funds from the asset manager.

When Florida’s CFO, Jimmy Patronis, made the BlackRock announcement, he spoke about getting “the best returns possible” for taxpayers so as to more effectively fund “priorities like schools, hospitals and roads.” Such criticism that ESG investing sacrifices individuals’ investing returns to fund liberal social missions is starting to catch on with the public, state officials from both political parties told Bloomberg Law.

Iowa’s treasurer, Michael Fitzgerald, said he’s received scores of letters in the past month voicing concerns about so-called “woke investing"—referring to the term Republican critics have attached to ESG. Fitzgerald, a Democrat, is leaving office in January and will be replaced by a Republican.

“I’m concerned that politics is getting involved in the finances of our states,” he told Bloomberg Law.

As state officials hear rising public criticism of ESG investing, they’re likely to ramp up the action they take, said Lori Kalani, who co-chairs Cozen O’Connor’s state attorneys general practice. “If a consumer calls with a complaint, they assume that there’s 5,000 others who didn’t call and have the same complaint,” she said.

Tennessee Attorney General Jonathan Skrmetti, a Republican, told Bloomberg Law that he has heard a lot of ESG concerns from people in his state.

“People are really worried that their money is being used to achieve social outcomes that they don’t want, and they feel like they don’t have any control over that,” Skrmetti said. “And so I think what you see in the ESG movement is a lot of people wanting to reassert control over their little sliver of the economy because their perception is that there are a few people who are managing their assets who have very different social preferences to them.”

For its part, BlackRock has weathered the criticism, noting that it’s been pressured by activists across the political spectrum on topics such as fossil fuels and clean energy investments.

“BlackRock has been subject to campaigns suggesting we are either ‘too progressive’ or ‘too conservative’ in how we manage our clients’ money. We are neither,” the asset manager said in an emailed statement to Bloomberg Law. 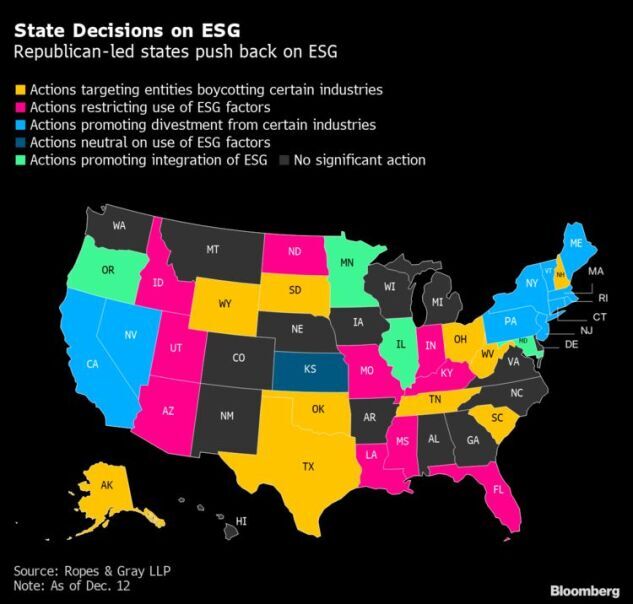 After announcing Florida’s $2 billion withdrawal from BlackRock, Patronis urged the agency that oversees the state’s pension funds to remove the firm as one of its asset managers. About $13 billion in state pension funds managed by Blackrock are at stake as the agency considers changes at a board meeting next month. Florida has bigger plans to fight ESG investing, including new legislation next year.

The concerns over ESG investing “put a lot of pressure on the investment firms,” said Kalani. “The fact that you have these treasurers that are now pulling their money out of BlackRock is really significant. Forget going to court, money talks,” she said.

Meanwhile, in Texas, a state Senate committee has subpoenaed BlackRock for documents over its ESG practices and how they may affect the state’s pensions. Texas lawmakers grilled BlackRock executives at a hearing last week. Other state officials are going after BlackRock CEO Larry Fink himself, including North Carolina’s treasurer, who called for Fink’s resignation because of his ESG focus.

But other Republican states are taking a more measured approach before deciding whether to pull funds from BlackRock or its peers over ESG investing concerns.

Skrmetti said he would advise officials in Tennessee to move slowly and cautiously if they want to pull funds out of the money manager.

“Any significant financial moves involving large sums of money need to be done deliberately,” he said. “They have to be careful not to abruptly put themselves in a difficult situation.”

Fitzgerald, whose state of Iowa has about $7 billion of assets held by BlackRock, said choosing the asset manager was the best possible decision because “they’re the best performers.” “There’s probably people on both sides that want to use this as a political wedge issue, but people will suffer,” the Iowa treasurer said.

Treasurers pulling money from an investment firm, however, “is immediate, it’s not like announcing an enforcement action,” she said. “It’s something that’s very different from the normal playbook.

It’s likely that economic pressures and the potential US recession are stoking public concerns about ESG , said Morris DeFeo, a partner at Herrick Feinstein.

For some, it’s more difficult to see the potential benefits of ESG when “interest rates are going up, and everything costs more, your ability to provide for your family is in jeopardy,” he said. “You’ll naturally have a lot less time and enthusiasm to focus on things that in your view are not immediate.”

The ripples of the ESG backlash are starting to play out in big ways. BlackRock’s main rival Vanguard recently pulled out of the world’s largest climate finance coalition, the Net Zero Asset Managers Initiative. Meanwhile, institutional investors are incorporating ESG factors into their investment decisions at the lowest rate since 2017, according to a study by the Callan Institute, a consulting firm.

The public debate about ESG is becoming increasingly intense, and can put officials in a difficult position. Overall, the idea that non-financial factors drive ESG investment decisions is a lie, DC Attorney General Karl Racine, a Democrat, told Bloomberg Law.

“If your intention is to make as much money as you can while exercising prudence on the risk side, it’s perfectly legal,” Racine said.

Companies’ social impact matters to their financial bottom lines, Jeffrey Sonnenfeld, senior associate dean of leadership programs at the Yale School of Management, said during a recent discussion on ESG hosted by the National Association of Attorneys General.

“When people say to companies, ‘Stay in your lane,’ I say, “What lane is that? The breakdown lane?” Sonnenfeld said Dec. 6.

During the heated panel discussion, Vivek Ramaswamy, who co-founded Strive Asset Management, said the majority of people would tell funds “hell no” if they heard their money went toward ESG investing.

“That is the problem,” Ramaswamy said. “You are using someone else’s money to advance an agenda that they disagree with, and it is their money. Not mine, not yours, not yours. Not BlackRock’s.”