Employees and shareholders are poised to have more influence over how dollars flow from business political action committees, as corporations and trade associations re-examine their approaches to political giving in the wake of the insurrection at the Capitol.

In the days after Jan. 6, at least 27 business PACs announced policies that would take the election certification vote into account when making donations, according to an analysis by Bloomberg News and Bloomberg Government. At least 40 more halted all PAC contributions. Republicans ended up challenging election certifications in Arizona and Pennsylvania, with 147 GOP lawmakers voting for one or both objections.

When or if the pauses are lifted, freezing out the members of Congress who objected to certifying the election could be only the start, as stances on equality issues, climate change, and social justice policies are taken more into account.

“The events of January 6 were a game changer for corporate PACs,” said Caleb Burns, partner at Wiley, whose practice includes advising corporations and their PACs. “It caused them to think beyond traditional business issues, such as taxes and regulation, and restarted a conversation about the types of issues a PAC should consider when making contributions.”

He’s cautioning PACs not to let single-policy issues or isolated votes dominate their donation criteria, and instead take the “panoply of issues relevant to a corporation’s success” into consideration. 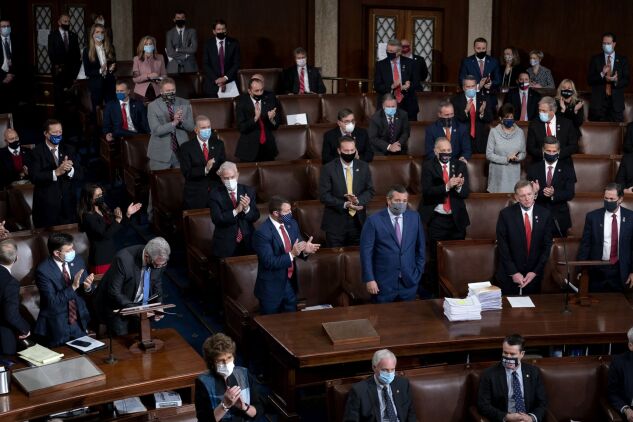 Corporate PACs are funded by employees of that company, and trade association PACs receive cash from employees and the PACs of member companies. PACs can give $5,000 to candidates for both their primary and general elections, and up to $105,000 per year to congressional party committees.

The challenge “will be whether they can stay focused on the issues that matter to the company, and those who support those issues,” he said, noting that there’s been a shift toward “secondary issues” in recent years.

“It gets back to the employees — the ones making the donations — and they’re going to have a big say on it,” Walden said about political giving. “Boardrooms are affected by shareholder pressure. And that’s going to influence it.”

Most of the PACs that have announced a break from political giving are also reevaluating their standards for deciding how PAC donations are doled out.

Micaela Isler, the executive director of the National Association of Business Political Action Committees, said many PACs have held board meetings, gone on “listening tours” or held town halls with employees, and broadly examined their donation criteria.

Some companies have expanded their PAC boards to diversify the group that makes decisions over where campaign money is directed.

“It’ll make all of us better, quite frankly, down the road,” Isler said.

It’s not unusual for a PAC to revise its giving criteria and respond to current events or controversial statements made by a candidate, but the scale and scope of the public reckoning is new, said Kristin Brackemyre, the director of PAC and government relations for the Public Affairs Council.

“It’s definitely unprecedented,” she said. “I know that’s a word that gets thrown around a lot, but I do think that it is applicable in this situation.”

Wall Street giant has halted its PAC giving “indefinitely” and is conducting a review that evaluates “how we will focus our political activity going forward,” Kate Fulton, its head of U.S. public policy, wrote in a memo in January. is going over its policies to “ensure that these policies fully reflect ADM’s values as a company,” it said in a statement.

Global agriculture company Cargill Inc., which suspended political donations, has a “steering committee of employees and stakeholders evaluating our giving policies and protocols as a company to ensure our giving is aligned to our company values,” a spokeswoman said, in addition to “our corporate ethics policies and our diversity, equity and inclusion expectations.”

The pauses reflect “a sea change,” said Matthew Sanderson, co-leader of the political law group at Caplin & Drysdale. “It changes the way that companies think of PACs as a source of risk, and also changes how they might manage some of those risks.”

At the end of February, the Public Affairs Council held its annual National PAC Conference and the “question on everyone’s mind” was how to restart contributions following an insurrection-inspired hiatus from PAC giving, Brackemyre said.

Every company and trade association’s “path forward is going to look a little bit different,” she said, noting that some may have some “tough decisions” that could earn scrutiny from employees, the public, or members of Congress.

Walden, who retired from Congress earlier this year and now runs a consulting business, cautioned against taking hard-line stances.

“Are you really going to shut down giving to somebody in a key position, who maybe has been the biggest champion for your cause on Capitol Hill because of one vote that had nothing to do with your cause? Is that a sustainable position?” he said.

“The further up that scale you go — to ‘I will never give to X ever again because of that one vote’ — that’s a harder one to walk back out of unless you’re serious about it,” he said. “And then that’s fine, but I don’t know all the side effects that might have on the relationship.”