Shareholder proposals targeting political spending are poised to ramp up in this year’s proxy season, pressing companies to unveil if their sometimes tightly-guarded stances on issues line up with their donations.

With Republican gains in the midterm elections and a new presidential election cycle looming, investors are expected to further question companies over how their campaign funding aligns with corporate stances on issues including voting rights and abortion.

For example, abortion restrictions springing up in states following last year’s Supreme Court ruling in Dobbs v. Jackson Women’s Health Organization are sure to drive further shareholder pressure. Investors had already been asking blue-chip companies including about how the overturning of Roe v. Wade could impact its business.

“We’re expecting to see shareholder proposals focused on what companies are doing in the wake of Dobbs and whether their political contributions align with those values,” said Michelle Diamond, a partner at WilmerHale.

The mounting investor attention on election spending and how companies respond to prominent political issues is new terrain for corporate America to navigate. Businesses may find their shareholders and employees have differing opinions on a range of thorny topics. Some companies may find themselves between a rock and a hard place—or a Republican and a Democrat—as a result.

“Companies need to be preparing for pressure from both sides,” Diamond said.

Investor concerns about political spending soared in 2022. A report on the 2022 last year’s proxy season compiled by groups including the non-profit Sustainable Investments Institute and As You Sow said resolutions that question conflicts between corporate policies and donations doubled to 20 proposals last year.

“The increasingly rancorous tone of the political scene has spilled over into shareholder resolutions, however, and proponents today are asking more pointed questions about how company money is spent, and what recipients of company-connected money support,” the report said.

investors received 44% of votes on the corporate ballot in a proposal that sought to shed light on donations that AT&T and its employee PACs made to politicians and organizations that worked to weaken women’s access to abortion. The proposal also noted company donations to Texas lawmakers that supported new restrictions on assisted voting and vote-by-mail applications.

The proposal, brought by As You Sow, also sought clarity on AT&T political spending for other issues including climate change and civil rights. It asked AT&T for a report analyzing how the company’s political spending from the last year lined up with its publicly stated values and policies. The proposal said the report should explain any “incongruent expenditures” and state if the company plans to change its contributions to candidates as a result.

“We believe our core business objectives and political giving align with our values,” AT&T’s board said in response to the proposal. AT&T added that, just because the company supports an official doesn’t mean it agrees with every opinion that individual has.

Companies are “coming to the slow realization that their broader stakeholders are expecting them to be responsible for the actions of the politicians they’re supporting,” said Meredith Benton, a consultant from Whistle Stop Capital who works with As You Sow on ESG issues.

But even as companies become more attentive and responsive to such shareholder concerns, “it’s not a quick fix,” she said.

Shareholders are focused on transparency for political contributions in part because of public concerns over elected officials’ stances including election results denials and voter suppression, Diamond said.

Political spending questions remain an important topic for activist investors in the aftermath of the Jan. 6 Capitol riots, when scores of companies including at the time pledged to pause contributions to lawmakers who objected to certifying the 2020 presidential election results. Two years later, with political spending back on track, companies continue to face questions about their allegiances.

But corporate contributions can be murky, even for those on the inside. At some businesses, directors and managers often lack insight into their company’s political spending, former Democratic SEC chair Allison Herren Lee wrote in a recent report for the Center for Political Accountability.

The report listed 22 S&P 500 companies that the organization gave scores of ‘zero’ out of 100 for political spending disclosures and oversight, including and .

Election-related spending through third parties including political action committees (PACs) is something companies should be especially cautious of, Bruce Freed, co-founder of the Center for Political Accountability, said during a webinar in November.

“The company would give to a third-party group but then lose track or lose control of where the money goes, yet it will be associated with the consequences, with the outcomes and the recipient. And that can have very significant reputational risks and bottom-line risk,” Freed said.

Proposals from last year demonstrate how shareholders will increasingly quiz companies on their politics and how they will respond to legislative changes on social issues. But companies taking public positions on topics including abortion rights is totally uncharted territory for some executives, said Patrick Gadson, a partner at Vinson & Elkins.

Last season, and pre-Dobbs, Walmart faced a shareholder proposal about how overturning Roe would impact its employees after the draft Supreme Court opinion was leaked to the public. Other companies including . faced similar investor bids asking the businesses to explain what they planned to do in response. 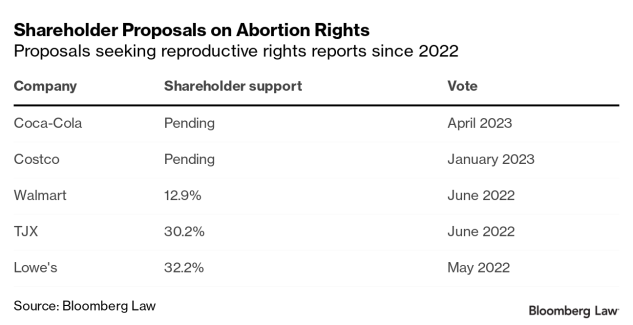 The Lowe’s proposal sought a report on any risks to the company stemming from state policies that restrict abortion, as well as information on strategies “beyond litigation and legal compliance” that the company could turn to to mitigate the risks. In response, Lowe’s said in its proxy statement that the proposal was “framed in such a broad manner that we believe it would be extremely difficult for any company operating in all 50 states to create a document that would be of utility for our shareholders, associates and other stakeholders.”

None of these proposals received majority support, but some, including the one at Lowe’s, secured over 30% or even 40% backing, signaling that there might be enough momentum for future bids to pass.

faces a similar proposal on abortion rights, filed by As You Sow, that investors will vote on at its spring annual meeting.

Some businesses are reluctant to delve into such political discourse. Walmart, for example, was criticized on social media for not immediately releasing statements on abortion rights after Roe was overturned. The company’s CEO said soon after that it was examining “many different viewpoints” from its employees.

To contact the reporter on this story: at chudson@bloombergindustry.com