Diversity on corporate boards of directors is more likely to be advanced with disclosure rules than specific quotas, after a pair of courtroom defeats for California laws that included gender and racial mandates.

The California laws required publicly traded companies with headquarters in the state to have at least one female director, and one person from an underrepresented group on their board, depending on board size. The laws imposed financial penalties of up to $300,000 for noncompliance.

Two California state judges struck down the laws in separate decisions in April and May. But other states increasingly are passing disclosure laws that are less likely to run afoul of equal protection laws, attorneys said.

Disclosure-only laws may impose penalties for failure to report, but because they don’t create classifications of people, have a better chance of surviving equal protection challenges.

“Legally, those types of laws are on stronger ground,” said Michael Hatcher, an attorney at Jackson Lewis PC in Washington, D.C. of disclosure laws. “California went further and faster than anyone else,” he added.

Lawsuits challenging the two California laws argued they violated the state and federal constitutions by making distinctions based on race and gender without a compelling government interest.

“Under California law, classifications based on gender have long been considered suspect for purposes of an equal protection analysis,” Los Angeles Superior Court Judge Maureen Duffy-Lewis wrote in striking down the gender diversity law in May.

“Men and women are similarly situated for the purposes of the bill’s gender based quota. But they are affected in an unequal manner by the rule,” Duffy-Lewis said.

Both Duffy-Lewis and Los Angeles Superior Court Judge Terry Green, who struck down the diversity rule in April, found California failed to identify a “specific, purposeful, intentional and unlawful” instance of discrimination.

The California Attorney General’s Office directed a response for comment to the California Secretary of State, which didn’t respond regarding potential plans. Without a reversal on appeal, both laws remain unenforceable.

At the national level, in 2020, won US Securities and Exchange Commission approval of a rule requiring its listed companies to have diverse board members, or explain why they don’t. That decision faces several pending legal challenges, including in the Fourth Circuit, alleging the rule violates companies’ First Amendment rights.

California’s quota and penalty system put it under the spotlight, Hatcher said.

“Any kind of race or gender-based decision comes under a very high level of scrutiny,” Hatcher said. But for disclosure only rules, “scrutiny isn’t going to be as high.”

Los Angeles Judge Duffy-Lewis said in her May ruling that because the plaintiffs in the case had shown that men and women were similarly situated but treated differently under the law, it was presumed to be unconstitutional. The state had the burden of proving otherwise, Duffy-Lewis said.

To do so, California had to show that the law furthered a compelling state interest, that it was necessary, and was narrowly tailored. The state failed to meet that very high bar, Duffy-Lewis concluded.

Disclosure rules, even in states that modeled their laws after California, are more discretionary, Hatcher said. Under disclosure, candidates for board positions aren’t facing differing treatment mandated by the state, he said.

“That’s probably the saving grace for those statutes,” Hatcher said.

Disclosure-only laws are easier for states to defend and thus enforce, and also serve to further the goal of corporate board diversity, said Deborah Marcuse, an attorney at Sanford Heisler Sharp LLP.

“What those laws do is they make what companies are doing visible to the public, who can then make their decision accordingly as to which companies to support, as to where they would wish to work, and even in encouraging local, state, and federal lawmakers to change the law,” Marcuse said. 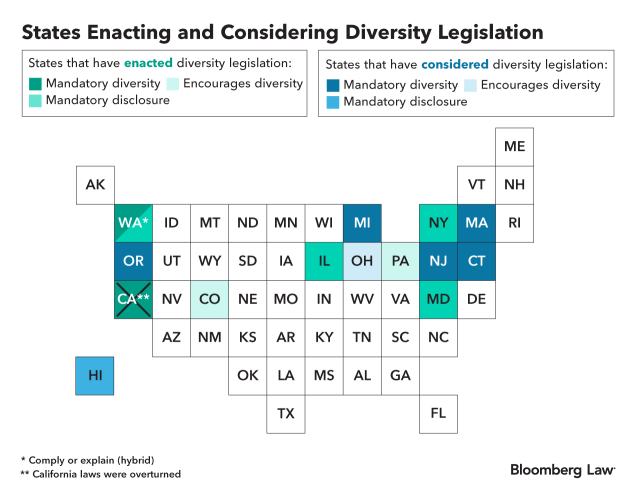 In New York, a disclosure statute, enacted in 2019, applies to all domestic and foreign corporations “authorized to do business” in the state. The law requires a “study” of female directors on the boards of companies operating in New York, and requires eligible companies to report the number of directors appointed to their boards and how many are female.

State disclosure-only rules have yet to face any substantive challenges, and, according to Hatcher, they may not.

“I think it would be very tough to overturn one of the disclosure statutes,” Hatcher said.

Colorado’s 2017 rule encourages “equitable and diverse gender representation on corporate boards,” and urges companies to have a minimum number of female directors depending on the size of the board. But the law is non-binding and doesn’t impose disclosure requirements. A similar bill is pending in Ohio.

Washington state, which requires certain companies to have at least 25% women on their boards, doesn’t impose non-compliance fines, but requires corporations who don’t meet the requirement to explain why, and to disclosure any measures taken to address lack of diversity.

Other states have implemented disclosure-only rules similar to New York’s, while a handful are considering bills modeled closely after California’s, requiring a certain number of women on boards of certain companies. As written, proposed mandates in Massachusetts and Michigan may face the same fate as California’s rules, Hatcher said. But the outcome on the West Coast may lead to changes in pending legislation, he said.

Despite the legal defeats, the California gender and racial requirements appeared to foster diversity.

“When California’s government put the law into place, there was a sense that it might not be sustainable,” said Villanova University professor Corinne Post. “But, it’s clear that it was very successful.”

Post pointed to data indicating that less than 1% of applicable companies failed to meet the rule’s requirements.

While the state’s law wasn’t the only factor behind increased momentum on the diversity front, legislation, even when limited to disclosure requirements, is one of the strongest options moving forward.

“There are other pressures that can continue to push for diversity, but those are only viable as long as corporate diversity is a public priority,” Post said. “If and when these groups suddenly have different priorities taking precedence, the pressures could vanish.”

Hatcher, in Washington, D.C., said states with proposed or pending legislation may have been waiting to see what happened with the California law, but that the recent rulings won’t deter legislators.

“I think a lot of people have been waiting, knowing that California was the first, and was probably affecting the most companies,” Hatcher said. “So California picked a fight with this.”

To contact the editors responsible for this story: at kperine@bloomberglaw.com; at mmali@bloombergindustry.com