Signage is displayed at the entrance to BlackRock Inc. headquarters in New York, U.S, on on Sunday, July 12, 2020.
Photographer: Jeenah Moon/Bloomberg

Florida is pulling about $2 billion from in the largest anti-ESG withdrawal announced by a US state, as Republicans ramp up their fight against the world’s largest money manager.

BlackRock wasn’t aware of the decision until reading about it Thursday in a statement from Florida Chief Financial Officer . In a video posted the day before the announcement, Patronis said financial firms should brace for more actions by the state’s Republican Governor , who campaigned for re-election on his so-called anti-woke agenda as he gears up for a possible presidential run. 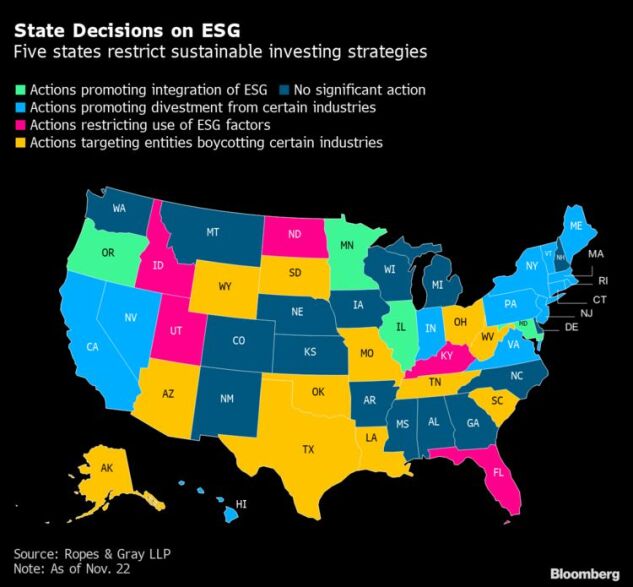 “We keep seeing action at a rapid pace and it seems to be escalating,” Joshua Lichtenstein, a partner at law firm Ropes & Gray’s ESG practice, said in an interview on Thursday. “It seems like a state which had already taken significant anti-ESG action is going even further.”

In all, 19 from states largely with GOP-dominated governments, including Arizona, Kentucky and West Virginia, have lashed out at BlackRock for pursuing a “climate agenda,” at odds, they allege, with generating returns for state pensions. Louisiana and Missouri are among states that have also pulled money from the asset manager.

“Using our cash to fund BlackRock’s social-engineering project isn’t something Florida ever signed up for,” Patronis said in the statement. “It’s got nothing to do with maximizing returns and is the opposite of what an asset manager is paid to do.”

BlackRock, which oversees $8 trillion globally, was “surprised” by Florida’s decision given the strong returns it has produced for state taxpayers over the past five years, spokesperson Ed Sweeney said. “Neither the CFO nor his staff have raised any performance concerns,” he said.

Pressure is building on BlackRock to stem the outflows. An analyst at UBS AG downgraded the asset manager’s stock rating in October, partly because its “early and energetic” portrayal of itself as a champion of ESG made the firm a political target.

Chief Executive Officer this week he’s been working to counter criticism from across the political spectrum for BlackRock’s support of sustainable investing. Republicans have retaliated against his firm’s embrace of what they’ve described as “woke” capitalism, while Democrats and environmental activists have targeted BlackRock for investing in fossil-fuel producers.

To help stem the backlash, BlackRock said it had picked Mark McCombe for a new role as vice chairman focusing on telling “BlackRock’s story to more stakeholders across the US, specifically at the state level,” according to an Oct. 3 memo.

Against that backdrop, BlackRock poured record amounts of money into US political campaigns this year. Fink said Wednesday that he has been spending a lot of time in Washington to “correct the narrative.”

The state treasury will immediately have Florida’s custody bank freeze about $1.43 billion worth of long-term securities and remove BlackRock as the manager of approximately $600 million worth of short-term overnight investments, Patronis said Thursday.

Pulling back from BlackRock is the latest step in a broader strategy orchestrated by DeSantis of clashing with corporations for their embrace of ESG values. Back in August, DeSantis passed a resolution calling for state funds to be invested without considering the “ideological agenda” of the ESG movement.

Patronis took the governor’s guidance and acted against BlackRock.

The move follows other similar clashes with corporate giants, such as and

DeSantis is seen as a key rival of Donald Trump for the 2024 Republican presidential nomination. The governor won a landslide re-election victory in November promising to battle what he called “woke ideology” being promoted by Wall Street banks, asset managers and big-tech companies in Florida.

BlackRock still manages about $13 billion for Florida’s State Board of Administration, which invests for the Florida Retirement System Pension Plan and more than 25 other state funds, according to an SBA spokeswoman. The Florida Department of Financial Services manages approximately $60 billion in taxpayer money.

“This feels like a political determination, not the deliberative determination you’d expect a fiduciary to make,” Lichtenstein said.