A pipe carries carbon dioxide captured from operations at the Petra Nova coal plant near Houston before it was mothballed.
Photographer: Luke Sharrett/Bloomberg via Getty Images

A technology used to combat climate change that could boost the ailing U.S. coal industry has provoked a fight between Wyoming and the state’s largest utility, which wants to move away from the coal game in favor of wind and solar.

Coal-dependent Wyoming, aided by a Trump administration study, is arguing for extending the life of the state’s coal-fired power plants and others across the country by retrofitting old plants with technology that would capture and either store or use climate-warming carbon dioxide emissions.

But Rocky Mountain Power, a subsidiary of PacifiCorp, wants to retire several of its aging coal-generation plants in Wyoming ahead of schedule and invest roughly $4 billion in new wind energy, transmission, and battery storage projects in the state. And environmental groups favor that plan, rather than extending the life of coal plants.

The standoff has red-state Wyoming— and national leaders who belittle the seriousness of climate change—fighting for the chance to prove the expensive process of carbon capture, use, and sequestration (CCUS), can be viable, albeit as a means for keeping coal plants nationwide afloat. Coal plants in Wyoming and other states are the prime customers for Wyoming’s low-sulfur, cleaner-burning coal

The battle now sits with the Wyoming’s Public Service Commission, which launched an investigation of PacifiCorp’s 2019 Integrated Resource Plan to close the coal plants. It has scheduled more deliberations for Oct. 8.

The commission has broad powers to regulate and supervise all utilities providing electric service in Wyoming, which produces more coal than the next six top coal-producing states combined.

The investigation of the company’s integrated resource plan is designed to ensure the plan is economically justified. But Chris Petrie, chief counsel at the Public Service Commission, told Bloomberg Law it’s not clear what happens next.

“As far as I know, the commission has not conducted an investigation of this extent of an IRP,” he said. “It’s a somewhat extraordinary situation.”

‘At an Early Stage’

Officials in Wyoming tout a new study from the Trump administration’s Energy Department as showing CCUS retrofits at power plants would bring significant environmental and economic benefits. One use for captured carbon is in enhanced oil recovery, where the carbon dioxide is injected underground to help push out more oil from their reservoirs.

The study, released Sept. 3 by DOE’s Office of Fossil Energy, compares CCUS adoption as “an alternative case” to PacifiCorp’s plan. But PacifiCorp believes the study, which Wyoming requested, has “significant limitations” and is “simply wrong,” Spencer Hall, spokesman for the company, said in an interview.

Wyoming and DOE said the study compared retrofitting coal-fired plants to use CCUS to the resources identified in PacifiCorp’s energy plan. CCUS would reduce carbon dioxide by 37% more, or 100 million metric tons, than the company’s plan, and produce avoided costs for carbon dioxide emissions that are $24 per ton less expensive than PacifiCorp’s plan, the study said.

It would reduce the amount ratepayers could pay by about 10% more per month than the company’s plan, and produce higher local and state revenue from property, sale, severance, and other associated coal taxes, as well as higher federal royalty payments, the state and the Energy Department said.

But some critics counter that it doesn’t make fiscal sense. The high capital costs associated with retrofitting coal-fired power plants for CCUS are not offset by the revenue to be made from using captured carbon dioxide in enhanced oil recovery, or the subsidies and tax credits that are available for storing it in the ground, they argue.

“The list of items missed by the study’s analysis is very long,” PacifiCorp’s Hall said. It “should not be relied upon for making the kinds of decisions required of a regulated utility.”

Critics point to the mothballing this summer of Petra Nova, the only U.S. carbon capture and use facility, as a warning to investors looking at CCUS. Petra Nova cost $1 billion, funded with a $195 million grant from the Department of Energy, investments by NRG Energy, the utility that ran the power plant, JX Nippon, a Japanese company, and $250 million in loans from two Japanese credit agencies.

Analysts blame the halt in carbon capture operations at Petra Nova, a retrofitted boiler located at the WA Parish coal-fired power plant near Houston, on low oil prices that have made it uneconomic to sell carbon dioxide to boost oil drilling operations. 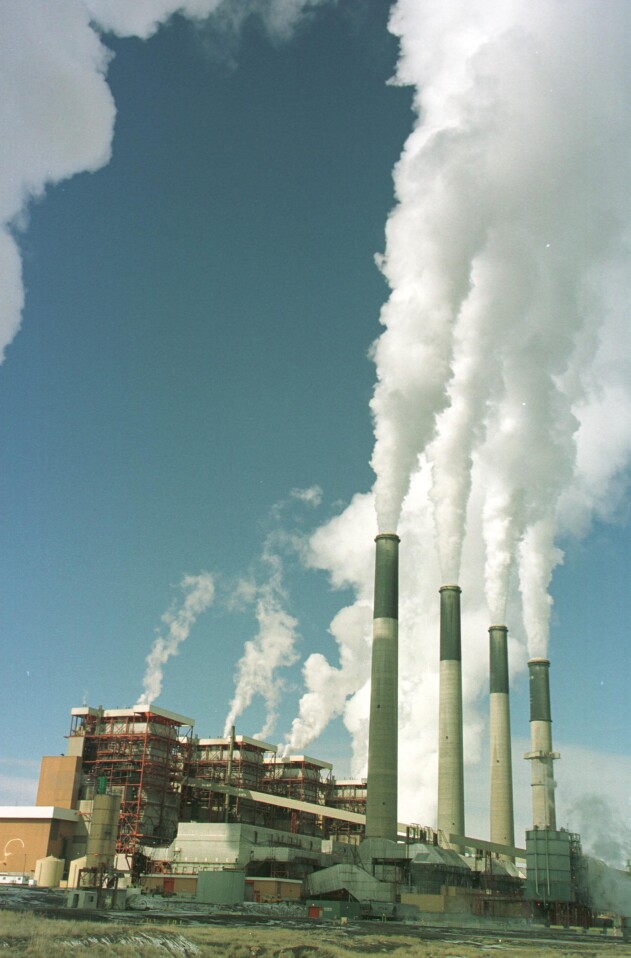 The Jim Bridger Power Plant near Point of Rocks, Wyoming. PacifiCorp plans to close the plant by the end of 2023.
Photographer: Michael Smith/Newsmakers

“The fundamental problem with the study is that it analyzes a future that nobody is considering,” Godby said in an interview. “Nobody is considering building out nine plants with CCUS simultaneously. It’s irrelevant information.”

Godby said it was misleading for the state to present the study as a rebuttal of the company’s plan. It also contains two very problematic assumptions about power plant efficiency and the price of oil, he said.

“They assume all the plants will run at 85% efficiency for their entire life,” he said. “That’s not realistic in any sense, given that the average capacity factor is below 50%.”

The study was conducted by Leonardo Technologies, a consulting firm in St. Clairsville, Ohio, that has done two similar reports for power plants in Colorado.

Leonardo’s CEO and president, Bob Gentile, is a former coal industry executive who served as the Energy Department’s assistant secretary for fossil energy and as director of the Interior Department’s Office of Surface Mining, Reclamation and Enforcement in the George H.W. Bush administration.

Economists and environmentalists say the fight between Wyoming and PacifiCorp, which serves customers in six Western states, could leave ratepayers and taxpayers on the hook for costs and subsidies associated with retrofitting old plants with CCUS technology.

“They want to take the money away from wind and give it to carbon capture when the rest of the world and the investment community is moving away from coal and toward more renewables,” said David Schlissel, director of resource planning analysis at the Institute for Energy Economics and Financial Analysis, an organization that focuses on transitioning to a diverse, sustainable and profitable energy economy.

Schlissel noted that PacifiCorp provides electricity to consumers in six states, three of which—Oregon, California and Washington— are calling for the elimination of coal as a fuel source.

“What if Oregon and Washington, where they’re requiring their utilities to get out of coal, say, ‘Forget about it, we don’t want to pay’” for plant retrofits, Schlissel said. “It could be a huge amount of money that the ratepayer in Wyoming will be asked to pay.”

The Public Service Commission’s investigation of PacifiCorp is backed and funded by the Office of Gov. Mark Gordon (R), who joined with many state legislators in vehemently opposing PacifiCorp’s plans to retire certain coal-fired units early.

The state’s investigation in part is examining the models and assumptions the company is using to justify early closure of coal-fired plants, he said.

The dispute comes as Wyoming is going to great lengths to breathe life into the ailing coal industry. In March, Gordon signed a bill (H.B. 200) requiring the state’s utilities to produce a portion of their electricity from low-carbon sources.

The new law is the opposite of other states’ renewable portfolio standards—requirements that utilities generate a minimum percentage of their power from renewable energy sources. The law also subsidizes carbon capture projects with a surcharge on residents’ electric bills.

Also during this year’s legislative session, lawmakers approved a bill (H.B. 4) providing $1 million to the governor’s office to market Wyoming coal. The governor used half that money to renew the state’s contract with the Energy Policy Network, an organization that advocates for the coal industry.

Randy Eminger, executive director and sole employee of the Energy Policy Network, said he has helped coordinate visits of lawmakers from other states to Wyoming’s Powder River Basin near Gillette, which contains nine of the 10 largest coal mines in the U.S., to tour mines, power plants, and the Wyoming Integrated Test Center.

“If you talk about closing coal power plants in Missouri or Michigan, it’s a direct hit on the state,” said Eminger, who previously served as an officer of the American Coalition for Clean Coal Electricity and is former director at Southwestern Public Service Co., an Xcel Energy subsidiary. “It’s one of the key things they market. In Kansas, you’re selling wheat to other states. In Nebraska, it’s hogs or cattle. In Wyoming, it’s coal.”