Workers process watermelons for shipping at Frey Farms in LaBelle, Fla., April 11, 2020. Grocers are struggling to keep shelves stocked during the coronavirus pandemic, so it might not make sense that farmers are dumping unsold milk and letting produce rot in the field because they have nowhere to sell it.
Photographer: Eve Edelheit/Bloomberg via Getty Images

Grocers are struggling to keep shelves stocked during the coronavirus pandemic, so it might not make sense that farmers are dumping unsold milk and letting produce rot in the field because they have nowhere to sell it.

But food wholesalers say that reflects a marketplace that can’t be easily adjusted on the fly, even during a crisis. It’s why farmers and others in food supply are counting on $9.5 billion in aid designated for them within the $2 trillion CARES Act that President Donald Trump signed March 27 () as an economic stimulus.

With Covid-19, Guenther said that supply chain “literally froze up in a matter of days.” 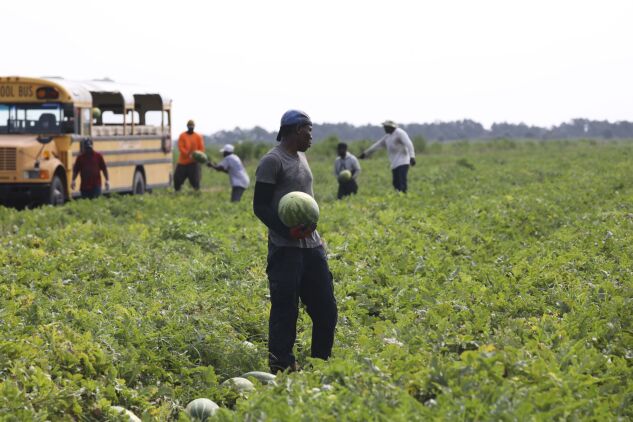 Workers harvest watermelons at Frey Farms in LaBelle, Fla. on April 11, 2020. Demand for produce plunged after the coronavirus forced restaurants to close or offer only takeout service.
Eve Edelheit/Bloomberg

Even as produce planted back in December and January will be ready for harvest in the coming weeks, “demand is so low, the question people are facing now is whether it makes sense to incur the operational costs to go out and harvest,” said Chris Valadez, president of the Grower-Shipper Association, a California-based trade association representing fruit and vegetable growers.

According to Guenther, the commercial food service industry accounts for roughly 40% of all fresh produce grown in the U.S. But that number is far greater for certain products.

“Most of the iceberg lettuce we grow goes into the fast-food industry, retail takes almost no iceberg lettuce,” said Tim York, president of the Markon Cooperative. Based in Salinas, Calif., Markon is a purchasing co-op which buys fresh fruits and vegetables for food-service distribution companies including Gordon Food Service Inc.

“As the food service economy grinds to a halt, farmers have all this iceberg lettuce with no place to sell it,” he said.

Pandemic-driven demand is driving purchases of certain staples such as bread, meat, eggs and dried beans. The same isn’t necessarily true for fresh fruits and vegetables.

“For the time being everyone’s waiting, storing what they can in packing sheds, or leaving it unharvested in the field,” Guenther said.

Moreover, as retailers respond to shoppers changing preferences, York said grocery stores are simplifying their inventory by reducing the number of produce stock keeping units, or SKUs, from a normal range of 300-400, down to 60-70.

That has squeezed out wholesalers like Kennett Square Specialties, a Pennsylvania-based supplier of exotic mushrooms for the cafeteria and food service markets. Sales Director Louis Caputo says more than 50% of his existing contracts have evaporated, costing the company about $250,000 a week.

“People aren’t panic buying mushrooms like they are with frozen pizza and chicken,” Caputo said. “If I could just call up Kroger have them hand me a million-dollar contract to sell them mushrooms I’d do it in a second, but it’s not that simple,” he said.

Even at Sysco, “grocery isn’t a big part of our business,” said Shannon Mutschler, communications director.

Shares of Sysco, Aramark Corp., and US Foods have seen their stock prices plummet almost 50% since late February.

In order to adapt to the dramatic downturn in the food-service economy Mutschler says the company has been trying assist it’s restaurant customers as they try to adapt their businesses for take-out and delivery. The company has also launched the “Sysco Knows Fresh” campaign to connect retail grocers with it’s expansive supply of fresh food options.

“Things like fresh meats, cheeses, dairy, the kind of stuff that we typically sell to commercial kitchens,” Mutschler said.

The Agriculture Department said it is swiftly evaluating the authorities granted under the CARES Act, and will leverage its programs to alleviate disruption as necessary, a department spokesperson said in a statement Thursday. The official added that the U.S. food supply chain remains safe and secure.

But some worry the relief won’t be anywhere near enough to keep many farmers from going out of business.

“Whatever amount ultimately becomes available, I’m not banking that it will be enough to keep the operational side of our industry adequately lubricated,” Valadez said. “I just don’t see that.”

Still others worry about the disruption created by a long-term shift in demand.

“You can’t just not harvest until the market comes back,” said , American Farm Bureau Federation executive vice president. “We’ve got farmers whose market has disappeared.”

One challenge, Moore said, is establishing a disaster assistance system that is straightforward enough for producers unaccustomed to federal program requirements, such as keeping specific documentation on-hand.

The Farm Bureau said it’s working with the Agriculature Department and food bank leaders to develop solutions to distribute perishable food to consumers in need.

“Whether it’s buying the produce and distributing that food to different nutrition and feeding programs,” Moore said in a telephone interview Friday, “or just making a direct payment to them to help carry themselves over until we can start getting our feet back under us, that’s what we’re going to be doing.”