A young deer is spooked while walking through sagebrush in Wyoming.
Photographer: Michael Smith/Newsmakers

A grand duel is taking place out West, but no cowboys are involved.

It’s between the native sagebrush, which has dominated the Western landscape for more 12,000 years, and a newer, highly invasive and flammable species called cheatgrass.

Saying the word “cheatgrass” alone evokes frustration among federal and state officials, who are doing their best with limited resources and tools that include herbicide use, targeted grazing, and reseeding, to fight for sagebrush’s existence. But it’s with limited success. The grass is highly flammable and with increasingly dry climates and wildfires, the grass is spreading faster than it can be stopped and changing entire ecosystems.

“The color of Nevada has changed from a sagebrush silver gray to a cheatgrass tawny brown,” Alan Jenne, the habitat division administrator Nevada Department of Wildlife, said of the vast expansion of cheatgrass in the state since the 1990s.

Over past the 20 years, wildfires in shrublands and grasslands, which make up one-third of the U.S., have burned more acres than forested lands, but tend to get less media attention.

“Science has already shown us that having cheatgrass doubles the risk of wildfire,” said Jeremy Maestas, a sagebrush ecosystem specialist with the Agriculture Department’s Natural Resources Conservation Service in Portland, Ore.

“In the biggest of pictures, when we talk fire in forests we need to also be talking fires in rangelands and the connection between fire and cheatgrass,” he told Bloomberg Environment. 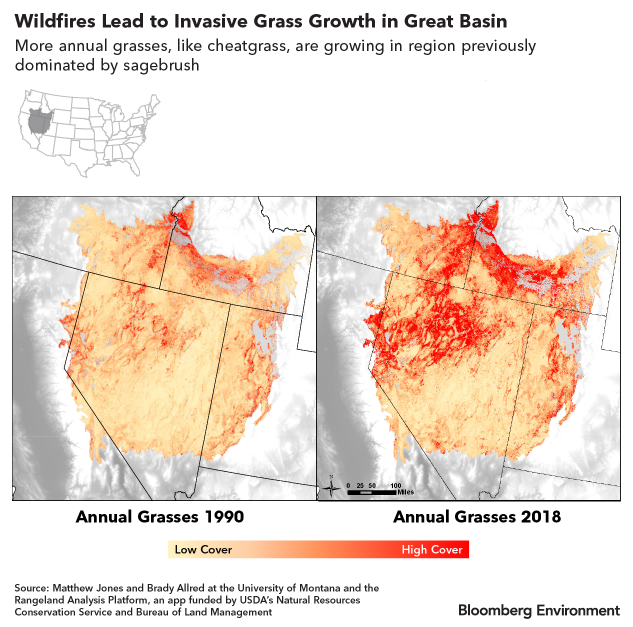 Cheatgrass is particularly pernicious in the Great Basin, which covers most of Nevada, half of Utah, and sections of Idaho, Wyoming, Oregon, and California.

The Interior Department’s Bureau of Land Management manages 60 percent of the basin. It is home to most of the 200 million-acre native sagebrush biome in the U.S., which is the largest terrestrial ecosystem in North America, Maestas said.

Humans are the source of 84 percent of wildfires, and not all are intentional. Often they come from vehicle accidents in dry landscapes.

In fact, over the last 20 years, 11 of the 50 largest wildfires in the U.S. have occurred in the Great Basin.

From 2000 to 2018, approximately 15 million acres of sagebrush burned primarily in the Great Basin, and approximately 9 million of those acres burned from 2014 to 2018 alone, said Michele Crist, a landscape ecologist with the Bureau of Land Management at the National Interagency Fire Center in Boise, Idaho.

And the issue is further complicated by the increasing number of people moving to the Western US., particularly to Boise, the fastest growing city in the U.S., Crist said.

“It’s surrounded by sagebrush landscapes that are being taken over by cheatgrass,” she said.

Kelly Pohl, a researcher at Headwaters Economics, a research company in Bozeman, Mont., is working with Western communities impacted by wildfires to establish building codes and landscaping regulations to better adapted to fire risk.

“The reason it’s a disaster is because we’re putting people in those places,” she said. “So that was our big question, how can communities be more resilient in the face of wildfires.”

Cheatgrass was first brought to the Western U.S. in the late 1890s in hay bales purchased from Asia to feed horse and cattle in the winter. In Asia, they would put in cheatgrass instead of hay.

“That’s why they call it cheatgrass,” Crist said.

Wildfires used to occur every hundred years on sagebrush rangelands in the pre-European settlement, but ever since the 1990s, fires have occurred every 7 to 15 years, Crist told reporters during a recent presentation at the Institute for Journalism & Natural Resources wildfire workshop in Missoula, Mont.

Maestas calls it a “wildfire and cheatgrass feedback loop.” Cheatgrass is an annual grass, meaning in needs to be reseeded each year to grown. But cheatgrass are “prolific seeders,” he said, producing up to 1,500 seeds per square foot.

Sagebrush is a perennial shrub that comes back every year. But when sagebrush burns, it has to be reseeded and can take up to 20 to 30 years to regrow, Crist said. Cheatgrass spreads its seeds on burs that can be spread by wildfire and regrows in just one season.

“In the spring, cheatgrass is there to cheat the native vegetation of soil moisture,” Maestas said.

Then, if a wildfire catches cheatgrass, it leads to a continuous burn. “Cheatgrass forms a mass of vegetation versus clumps like our native plants, like sagebrush, so it’s much easier for fire to burn through that quickly,” he said. Cheatgrass also dries out in June and July, which is earlier than native species that stay green until August.

The cheatgrass and wildfire cycles are also threatening the habitats of 350 species across 13 states, most famously the sage grouse, whose burned habitats are threatening to land it on it endangered species list.

“The sage grouse is an iconic species and is an indicative species of the health of this ecosystem,” Jolie Pollet, the BLM division chief for fire planning and fuels management in the Boise office. She said she’s very concerned about future habitat loss being a “growing and continual problem.”

The Bureau of Land Management and the Forest Service are using several tactics to manage cheatgrass growth. One of them is by spraying herbicides to prevent cheatgrass seeds from germinating and emerging.

Every herbicide used goes through EPA testing and certification. The herbicides are targeted at the life cycle of the invasive plant and don’t affect native species, and they work on applying it strategically, Maestas said.

Additionally, going in and doing post-fire rehabilitation and reseeding native species, like sagebrush and other native perennial grasses is something the federal agencies are doing to prevent regrowth of cheatgrass after fires.

Other solutions include targeted livestock grazing on cheatgrass during certain seasons. During the spring, “it’s green and delicious,” Maestas said.

“Cheatgrass is a tough nut to crack,” said Jeanne Chambers, a research ecologist with the Forest Service in Reno, Nev. “I think that we are providing new tools to better target the work we do.”

“We still need more research on the effect on targeted grazing on native ecosystem over time,” Chambers added.

Maestas said BLM and the Forest Service are also doing prescribed or planned burns of conifers, like pinyon and juniper, that are encroaching into lower elevations of sagebrush habitats.

Lastly, the agencies are trying to experiment with natural fungus that can kill a large swath of cheatgrass. So far this strategy hasn’t worked, but there’s a lot of research going into that, Crist said.

BLM’s Pollet said there are limited successes, “but not really anything widespread enough to get at this issue on that really large scale that we’re experiencing.”

But Nevada Department of Wildlife’s Jenne said he’s staying in the cheatgrass battle.

“I have seen more positive results, we’ve refined our techniques, we’ve learned lessons, we’ve improved our successes,” he said. “Each year we will progress in this battle. Cheatgrass is a tough competitor, but I think we are gaining ground.”