As the largest wildfire in Colorado history spread beyond 200,000 acres, Mark Kempton began to worry it would incinerate so much of the Fort Collins watershed that the city would be unable to guarantee water to its residents.

When the spring rains come next year, ash and debris will pour down the slopes of the Rocky Mountains and clog the city’s water intake on the Cache la Poudre River, said Kempton, interim director of Fort Collins Utilities, which oversees the water supply for Colorado’s fourth-largest city.

How wildfires can affect water quality are well documented. But increasing—and increasingly intense—Western conflagrations are leading to fears they also could constrict the water quantity available in some of the nation’s most water-stressed areas.

Fort Collins isn’t an outlier: This raging wildfire season and extreme drought, exacerbated by climate change and compounding the damage from previous record-breaking wildfire years, could pose a years-long threat to water supplies throughout the West. It could even choke the ability of some cities and states to keep faucets flowing.

And the Cameron Peak Fire, which started nearly two months ago, is still blazing along a wide swath of Roosevelt National Forest in north-central Colorado. Kempton predicted the fire would lead to “several years” of threats to Fort Collins’ water supply.

“When the fire comes, you impact that infrastructure—you’re prone to these incredible mudslides that go in and block water and send debris downstream,” said Gail Schwartz, a member of the Colorado Water Conservation Board representing the Colorado River watershed. “It is water quality; it is water quantity.”

When wildfires burn, they don’t just incinerate millions of acres of trees, forests, homes, and habitat. They burn up the mountain slopes and valleys that hold what water managers call the West’s largest reservoir: its snowpack.

Winter snow accumulates on peaks and in montane forests, and when spring comes, the water in the melting snow is absorbed into the ground, feeding springs and aquifers. Much of the rest of the water gushes down into streams and rivers, feeding reservoirs and municipal drinking water intakes—and eventually millions of faucets across the West.

A watershed is an area of land that channels water from rain and snowmelt downhill to streams or rivers. Cities use natural watersheds as funnels for snowmelt and rain to flow into rivers, and into their water delivery systems. 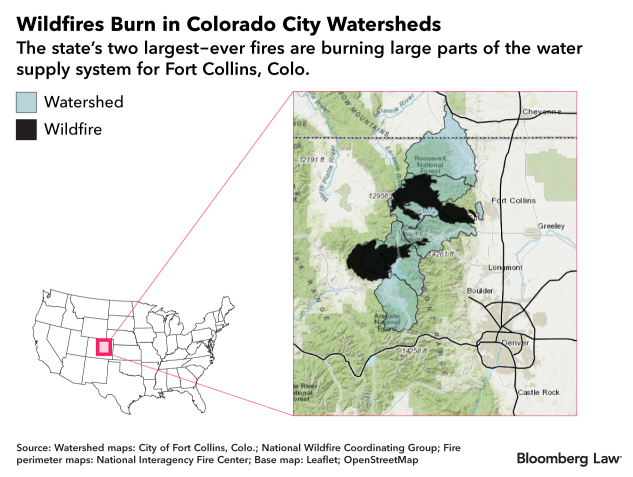 But wildfires transform watersheds and change how they work, said Kelly Gleason, an ecohydroclimatologist at Portland State University in Oregon who studies the connections between wildfires and water in the West.

When a wildfire burns forests in a watershed, there are no trees to absorb any of the water, Gleason said. With the forest canopy gone, the snow is exposed to more sunshine, melting it faster—sometimes throughout the winter. And the charred remains of trees and soot falling to the ground darken the snow, making it absorb even more heat and melt faster still.

All across a burn area, the forest soil repels water, becoming “hydrophobic"—preventing rain and snowmelt from soaking into the ground, and forcing it to cascade down the mountains and flood the streams below, Gleason said.

The result: Snow melts earlier than usual at a time when reservoirs aren’t prepared to capture the runoff, because many can’t start refilling for the season until late in the spring.

“If it’s melting all year long, it’s reducing streamflow availability,” Gleason said. “We don’t have the capacity to store the water so essentially, it’s lost. It acts like it’s reducing the total streamflow.”

If precipitation falls as rain—something more common even in cold months as the climate changes—it careens right off the slopes of a burn area, creating flash floods that jam city water intakes with soot and debris.

National Interagency Fire Center statistics show that as of Nov. 9, more than 8.7 million acres—an area larger than the land masses of New Jersey, Connecticut, and Rhode Island combined—have burned this year across the West.

In California, the August Complex fire has burned an area about one-third larger than Rhode Island. The blaze has scorched parts of Northern California’s Mad River watershed, which supplies water to coastal cities.

Though the firestorms have been intense, they don’t yet put 2020 among the top five worst wildfire years on record; 2015 holds the record for most land burned—10.1 million acres nationwide. Some of the areas that burned then are still recovering.

Some of fires’ effects, such as debris flow, last only for a year or so after a wildfire. But others, such as the burn area’s effect on snowpack, may last for years.

“It’s absolutely a threat to our water supply—the quantity and quality of the water that’s able to flow across the landscape,” said Dave Eggerton, executive director of the Association of California Water Agencies, which represents more than 430 public water utilities across the state.

California’s reservoirs and water gathering systems, like most across the West, are designed to capture snowmelt and rainwater beginning in late spring, when snowmelt comes at a measured pace.

A Threat to Plan B

The oblong lake and its three dams looming over the city are fed by a water system called the Colorado-Big Thompson Project, which draws from the headwaters of the Colorado River and send the water to reservoirs feeding Fort Collins and other cities and farms on the east side of the Continental Divide.

But in late October, another wildfire, the East Troublesome Fire, grew by 100,000 acres overnight, threatening that watershed, too.

A week later, the Cameron Peak and East Troublesome fires were the first and second-largest wildfires in Colorado history, both burning simultaneously only a few miles from each other. They were scorching broad swaths of watersheds that hundreds of thousands of people rely on for their drinking and farm irrigation water, posing threats that water managers haven’t even begun to calculate.

“It’s too early for us to have a full assessment of what it’s going to mean in the long-term,” said Jeff Stahla, spokesman for Northern Water, which manages the Colorado-Big Thompson Project, referring to the East Troublesome Fire. “We know the fire perimeter includes some of the headwaters of the C-BT Project.”

Fort Collins also has recent experience with shoring up its water supply after a wildfire. In 2012, the High Park Fire burned 87,000 acres in the city’s Poudre River watershed, immediately downstream of where the Cameron Peak Fire is burning today. But the city was lucky there, too.

That September, an unusual extreme weather event dumped more than 17 inches of rain on northern Colorado, damaging 18,000 homes and causing about $2 billion in damages.

The rains washed the Poudre River watershed clear of debris that would have otherwise prevented Fort Collins from using the river water for years after the fire.

But like many other cities across the West, Fort Collins doesn’t control its own watershed. The city’s water comes from the deep snowpack that falls each winter high in the mountains of Rocky Mountain National Park and the nearby Roosevelt National Forest.

That’s also the case across the West, where fires are burning on land managed by the U.S. Forest Service, National Park Service, Bureau of Land Management, and other state and local governments, forcing water supply agencies to work with state and federal officials to ensure their scorched watersheds will recover.

After the blazes die down, Fort Collins will build on lessons it learned working with the U.S. Department of Agriculture and the Forest Service after the High Park Fire in 2012 in order to restore the forest within the Cameron Peak Fire burn area, Kempton said.

Forest Service officials have begun a preliminary analysis of how to restore the watershed and its ability to supply water to nearby cities and conservation organizations, said Reghan Cloudman, spokeswoman for the Arapaho and Roosevelt National Forest in Fort Collins.

But the agency hasn’t yet outlined all the details of the recovery plan, partly because the Cameron Peak Fire grew dramatically since preliminary data were collected for the effort, Cloudman said.

No matter the steps agencies take to restore the forests, the changing climate and extreme drought could lead to forests burning again.

“This year is going to be scary, and I don’t know that many communities know where they’re going to get their water immediately,” Gleason, the ecohydroclimatologist, said. “We are in a new normal of fires in the West where they didn’t occur before. The human system is not built to deal with those impacts.”