President on Wednesday will announce executive action to confront climate change, including plans to steer federal dollars to heat-ravaged communities, though he’s holding off for now on an emergency decree that would allow him to marshal sweeping powers against global warming.

The president will outline the steps he’s taking at a shuttered coal-fired power plant in Massachusetts, vowing that he won’t allow a congressional impasse on climate legislation to put off urgent action to slow rising global temperatures, according to a White House official who asked to speak anonymously before the speech is delivered.

White House officials are still weighing a separate declaration that climate change is a national emergency -- a step that would unlock broad executive authority to propel clean-energy construction, restrict oil drilling and curb the transport of fossil fuels.

The emergency order is one of several tactics now under deliberation as the White House weighs strategies to demonstrate Biden’s commitment to clean energy without jeopardizing ongoing talks on health care legislation in Congress, according to people familiar with the discussions. 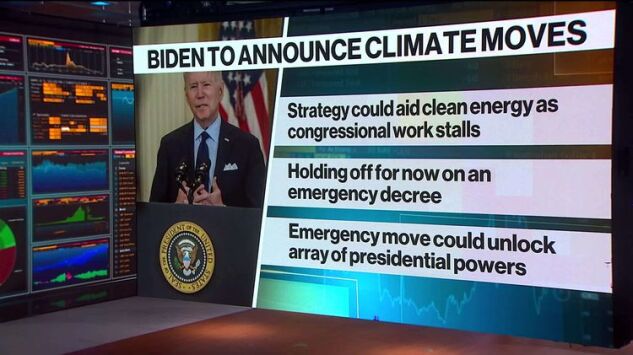 Any move to deploy emergency powers against fossil fuels risks alienating Senator , the West Virginia Democrat who last week withdrew his support for climate and tax legislation but whose vote is still critical to passing the health measure under fast-track budget reconciliation procedures.

“He is going to move forward with every power available to him to make the change, and the shift, to clean energy,” White House climate adviser said Wednesday morning on CNN. “The president will make very clear, again, that this is an emergency and we are going to act, but the president is going to outline that at his pace.”

Nevertheless, an emergency order would be a potent way for Biden to show he’s committed to addressing the climate threat before November’s pivotal midterm elections. After Manchin slammed the brakes on clean energy and climate provisions in the reconciliation package last week, discussions accelerated among Biden’s allies and within the White House about steps the president could take unilaterally.

“That’s just not the announcement today,” McCarthy said. Biden will roll out a series of climate announcements in the next “few weeks,” she added.

The president has insisted he would “ from the fight. “If the Senate will not move to tackle the climate crisis and strengthen our domestic clean energy industry, I will take strong executive action to meet this moment,” Biden said in a statement Friday in response to reports Manchin had withdrawn his support.

Still, the president does not plan to declare a climate emergency this week. While “everything is on the table,” White House Press Secretary said Tuesday, “it’s just not going to be this week on that decision.”

From Coal to Wind

The Brayton Point Power Station, where Biden will speak, was once the largest coal-fired power plant in New England before it closed in 2017. It’s now primed to serve as a manufacturing hub for undersea power cables and other equipment critical for offshore wind farms planned along the US East Coast.

The site embodies the US transition from fossil fuels to renewable energy as well as the president’s to deploy 30 gigawatts of offshore wind power by 2030. Biden has repeatedly portrayed the shift toward renewable and cleaner energy sources as a jobs engine for the US economy, and on Wednesday, he will emphasize how federal policies are helping propel lower costs, energy security and good-paying work, the White House official said.

Under an emergency declaration, Biden could go further by redirecting federal funding to clean-energy construction, steering aid to communities on the front lines of climate change and even curb the export of fossil fuels.

President used a similar tactic to divert billions of dollars to begin construction of a wall on the US southern border after Congress refused to appropriate the funding. Trump’s decision was criticized by Democrats at the time as an illegal end-run around Congress and faced multiple court challenges.

Biden revoked Trump’s emergency declaration shortly after assuming office, before it had been fully litigated.

It would be no less controversial if Biden seized powers typically deployed against unexpected national disasters. Some good-government advocates have warned against it, cautioning that enduring climate action requires special tools from Congress, including tax credits to spur renewable power projects and advanced energy manufacturing included in the now-stalled climate bill.

But many Democrats, ready to move on from that approach after more than a year of negotiations, are pushing Biden to act aggressively now.

“The potential to enact the legislation is dead,” said Senator , an Oregon Democrat. The development “frees up the president to use the full powers of the executive branch -- and those full powers certainly include a climate emergency.”

Senator , a Massachusetts Democrat and author of the Green New Deal, has lobbied the White House to seize emergency authority.

“I’m confident that the president is ultimately ready to do whatever it takes in order to deal with this crisis,” Markey told reporters Tuesday. “He’s made that clear in his statement last Friday, and I think coming to Massachusetts is a further re-articulation of that.”

By declaring a national emergency, Biden could tap more than 100 special powers normally intended to address hurricanes, terrorist attacks and other unforeseen events.

For instance, under the Stafford Disaster Relief and Emergency Assistance Act, the president could direct the Federal Emergency Management Agency to construct renewable energy projects using federal money. He could also trigger a national security exemption in a 2015 law that lifted a decades-long ban on most crude exports, re-imposing licensing requirements and other restrictions to curtail overseas oil sales.

Even without declaring an emergency, Biden can use the federal government’s purchasing power to compel clean-energy acquisitions. He’s already Cold War-era authorities under the Defense Production Act to propel US manufacturing of an array of critical energy technologies, including solar panels, fuel cells and heat pumps.

Some analysts believe Biden might wield emergency powers in a more targeted way, such as by seeking to increase clean energy production.

“Courts have generally given presidents wide latitude on emergency declarations,” , director of research at Height Capital Markets, said in a note for clients on Tuesday. But major steps to limit fossil fuel production, transportation and consumption “could be vulnerable to legal challenge,” he said.