If you apply a chemical to a field of crops, either from a sprayer towed behind a tractor or from above, by an aerial crop duster, that is considered a pesticide.

However, if you take that same chemical and coat it on a seed, then plant that seed in the ground, it ceases to be pesticide—at least according to government regulators.

This issue of how to define a pesticide is at the center of a growing battle over a regulatory loophole that allows seeds coated with chemicals to be considered “treated articles,” rather than pesticides.

“That exemption has had devastating consequences for the environment, and pollinators in particular,” said Amy van Saun, a senior attorney with the Center for Food Safety.

The Washington, D.C.-based advocacy group is among a chorus of critics who argue that the Environmental Protection Agency has incorrectly applied the treated-article exemption (40 CFR 152.25a) to seeds, allowing chemical companies to avoid a number of environmental safety and labeling rules required by the Federal Insecticide, Fungicide and Rodenticide Act (FIFRA).

“For instance, neonicotinoids are the most widely used class of insecticides in the world,” she said, referring to a type of pesticide implicated in declining pollinator populations. “If they [regulators] don’t look at the neonics that are applied as seed coatings, they’re ignoring one of the primary routes for pesticides into the environment.”

But representatives for the crop seed industry remain unconvinced. They say the increased use of pesticide seed treatments has actually allowed farmers to use fewer, and less toxic, chemicals than before.

“When the neonicotinoids were introduced, they offered a less harsh product than many of the older chemistries, and we feel that they have lived up to that,” said Jane DeMarchi, vice president of government and regulatory affairs at the American Seed Trade Association.

In addition to being less toxic to mammals than many of the older organophosphate pesticides, seed treatments allow farmers to apply insecticides with a single, minuscule application, rather than multiple applications of a foliar spray, DeMarchi said.

“And it’s below ground, so there is less opportunity to interact with nontarget pests,” she said.

The use of so-called “neonics” took off in the late 1990s when chemical companies started using them as seed coatings to protect commodity crops like corn, soybeans, and cotton from early-season pests.

Unlike earlier generations of insecticides, neonics act systemically, meaning that once absorbed by the growing seed, the entire plant becomes toxic to insects, including beneficial ones such as bees and butterflies.

“One teaspoon of a neonicotinoid is enough to deliver a lethal dose to 1.25 billion honeybees,” said David Goulson, a professor at the University of Sussex and author of several books about bees. “And we’re applying thousands of kilos of this stuff to the landscape all the time.”

Goulson also refutes the claim that neonics offer a more targeted application. He said only 5% of the chemical itself is actually taken up by the plant, leaving the remainder to leach into nearby streams, soil, and plants.

The three primary chemicals used in seed coatings are imidacloprid (sold under the brand name Gaucho from Bayer AG), clothianidin (Poncho from Bayer/BASF), and thiamethoxam (Cruiser from Syngenta AG). 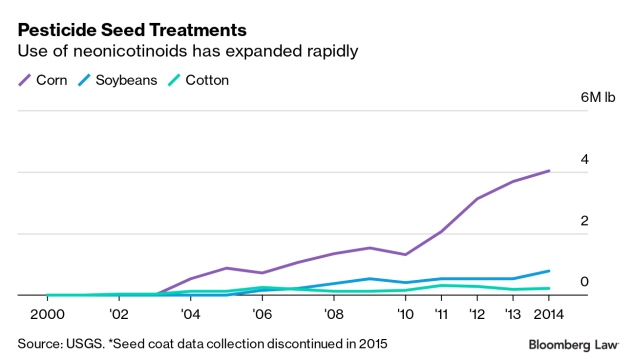 In April 2018, the European Union issued a ban on the three substances, except within closed greenhouses.

Other research suggests that the chemicals are also responsible for sub-lethal effects, such as impairing bee learning and memory—which affects a bee colony’s ability to forage for food.

“Even at very brief exposures at extremely low doses, we observed a significant decrease in a bees’ cognitive functions, such as forgetting their homing route back to the hives,” said Hartmut Doebel, an assistant professor of biology at George Washington University. “The pesticides also gets into the pollen and nectar, which the bees then carry back and expose to the whole hive.”

In addition to impacts on bees, a 2019 study published in the journal Science found that birds that consumed small, field-realistic doses of neonic-coated seeds lost weight and suffered delays to their migration.

‘It Wasn’t Meant for Agriculture’

FIFRA defines a pesticide as “any substance or mixture of substances intended for preventing, destroying, repelling, or mitigating any pest.”

But the EPA lets some products qualify for a treated-article exemption. According to the law, the product must be treated with a registered pesticide, and the pesticide must be limited to protection of the treated article only.

Back when the exemption was promulgated in 1988, he said regulators never had seeds in mind. Instead, it was meant to exempt certain categories of products with “pesticidal” qualities, such as treated lumber or insect-resistant paint.

“It wasn’t meant for agriculture; it doesn’t make any sense in that context at all,” Tooker said. “You’re preemptively deploying chemicals into fields of crops, just in a different way.”

According to an analysis by Tooker and his coauthor, by 2011 more than 79% of field corn acres and about 40% of soybeans were treated with a neonicotinoid. By 2014, the percentage that was treated crept toward almost 100% for corn and 50% for soybeans.

But others say that even if the EPA doesn’t regulate a seed as a pesticide, it’s still regulating the pesticides on the seed.

“They say how much can be applied, on what types of seed, and set residue tolerances for the food produced from those plants,” said Bill Jordan, a former deputy director in the EPA’s Office of Pesticide Programs.

Moreover, Jordan says the definition of a pesticide under FIFRA is actually quite expansive, including not only chemicals labeled as pesticides, but also those making implied public health claims for protection against viruses, fungi, or bacteria.

In 2017, a coalition of farmers, beekeepers, and nonprofits submitted a citizen petition to the EPA, challenging the agency to justify the exemption of treated seeds from FIFRA.

Among their concerns, the petitioners said the systemic nature of neonics makes treated seeds fundamentally different from other treated articles.

“Seeds coated with liquid formulations of these chemicals are pesticide delivery devices. The purpose of this technology is to carry the active ingredient via the growing plants’ circulatory systems into the tissues of the plants, which ultimately are typically hundreds or even thousands of times larger in dimension and mass than the seed itself,” the petition states. 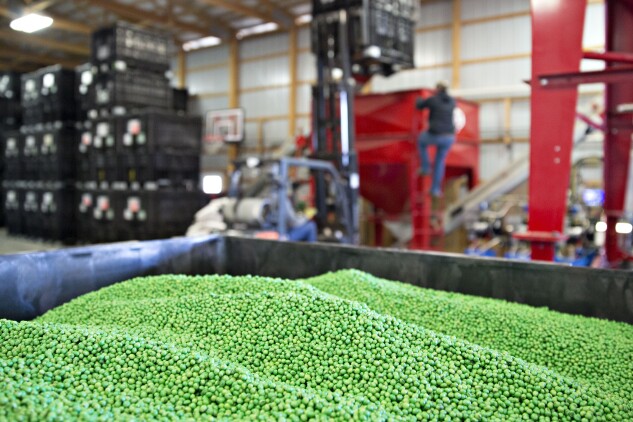 Under FIFRA, pesticide makers have to submit reams of data to the EPA that prove their chemical doesn’t create “unreasonable adverse effects to man or the environment,” she said. “It also triggers requirements under the Endangered Species Act, a process that other pesticides have to go through.”

The petition seeking rulemaking was posted for public comment in the Federal Register in December 2018.

A spokesman for the agency said he couldn’t say when the EPA might rule on the petition, but “the public will have another opportunity to comment on issues pertaining to treated seed products during the ongoing registration review for the neonicotinoids.” An interim decision is expected to be posted in “early 2020,” the EPA spokesman said.

Representatives for the chemical makers say the petition, if granted, would amount to a duplication of regulatory efforts. It “would require a significant regulatory burden, while having little to no benefit on human health or environmental safety of seed treatment products,” according to Carroll Moseley, a regulatory stewardship manager for Syngenta.

More Corn in the Crib

Moseley said the increased use of seed treatment products over the last two decades corresponds directly with yield increases and other benefits for farmers.

“Twenty years ago, if we had a cold wet spring like we had last year, we would have had of a lot of early emergence issues,” said Bob Hemesath, who farms 2,700 acres of corn and soybeans near Decorah, Iowa, referring to problems getting seeds to grow.

But despite the benefits, Hemesath said that neither he nor his neighbors want to use products that hurt the environment. “I guess we rely on the science to tell us the right thing to do,” he said.

But even if farmers were inclined to use nontreated seeds, finding a place to buy them can be challenging.

“There isn’t a whole lot of customization; once that seed is in the bag, it’s in the bag,” said Mitchell Hora, a seventh-generation row crop farmer from Ainsworth, Iowa.

In recent years, Hora said he’s adapted his operation to incorporate so-called “regenerative” soil practices, designed to promote beneficial insects and microbes. As such, he largely avoids using insecticide-treated seed, but he understands why many farmers still do.

“It’s pretty much a one-size-fits-all concoction of treatments,” he said. “Whether you need them or not, I think a lot of farmers see that it has paid off more often than not.”

Still, other evidence suggests that the yield benefits of neonic-coated seeds may be vastly overestimated.

A 2014 study by the EPA’s Biological and Economic Analysis Division analyzed the use of seed treatments for insect control in soybean production and concluded: “In most cases there is no difference in soybean yield when soybean seed was treated with neonicotinoids versus not receiving any insect control treatment.”

A similar scientific study from 2017 also found that the seed treatments were of marginal benefit to corn, with average yields from the treated seed about 2% higher than untreated.

“That’s probably not enough to justify its use on basically all corn planted in the U.S. every year,” said Christian Krupke, a professor of entomology at Purdue University in Indiana and lead author of the paper.

Krupke said the EPA was also in the process of conducting its own corn study, including collecting data from him and other researchers, before the project was called off without explanation.

“I think the fact that we’re seeing this huge increase in pesticide use, with no corresponding increase in pest threats, creates a number of tough questions for [pesticide] registrants who want to sell more products,” he said.

(Updated with new statement from an EPA spokesman in the 35th paragraph.)