Senate Majority Leader and West Virginia Senator released the outline of a tax, climate and health care deal on Wednesday, in what could prove to be major breakthrough after weeks of negotiations.

The proposal would raise an estimated $739 billion, with the revenues going to fund climate and health initiatives, as well as to reduce the budget deficit. While it would amount to the biggest tax hike in years, it’s far removed from the of the tax code the Biden administration once hoped for, and leave in place much of former Republican President ’s 2017 tax-cut package.

It remains unclear whether the deal will be backed by the full Democratic caucus in the 50-50 Senate. It would also need to pass the House, where progressives sought a much bigger plan. Democrats are aiming to vote on the so-called reconciliation bill, which needs a simple majority to pass, before a recess starting in August.

Here are the highlights of what’s in the deal: 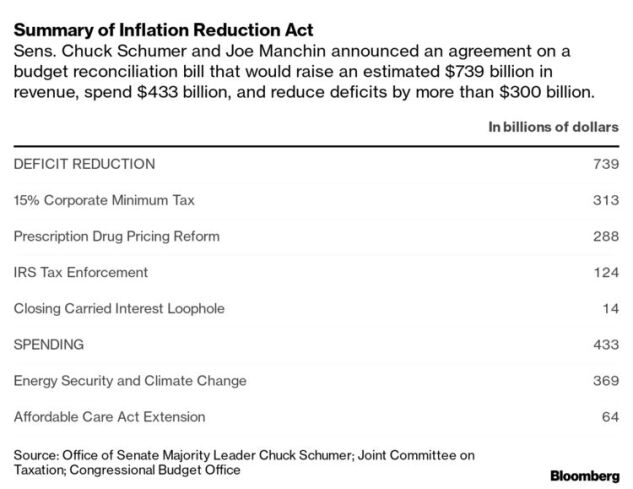 The bill imposes a 15% minimum corporate levy on companies that have traditionally been able to pay little-to-no taxes because they were eligible for a long list of credits and deductions. This measure is known as the book tax, because it is applied to a company’s book, or financial-statement, earnings -- rather than the income calculation traditionally used for tax purposes. The regular, 21% corporate rate is left untouched, maintaining a key part of Trump’s 2017 tax law.

The Internal Revenue Service would get $80 billion to add auditors, improve customer service and modernize technology. Democrats hope to pull in $124 billion in tax revenue from cracking down on tax cheats and increasing compliance by rebuilding the IRS. The agency has lost staff and expertise over the past decade because of budget cuts.

The plan would end the carried-interest tax break used by private equity and hedge fund managers to lower their tax bills. That allowed for a share of an investment manager’s income to be classified as a capital gain, which is taxed at 23.8% instead of the top 37% rate for salary and wage earnings.

The bill includes $4,000 tax credits for lower and middle income buyers to use to purchase used electric vehicles, and up to $7,500 tax credit for new vehicles. The inclusion is a win for EV makers including , and

The plan has $60 billion of incentives to bring clean energy manufacturing into the U.S. These include production tax credits to accelerate U.S. manufacturing of solar panels, wind turbines, batteries, and critical minerals processing. The plan also includes investment tax credits to build clean technology manufacturing plants that make EVs, turbines and other products.

There would be tax credits for consumers who add renewable energy items to their homes, under the legislation, including efficient heat pumps, rooftop solar, electric HVAC and water heaters. The plan also includes $9 billion for home energy rebate programs for low-income consumers to make their homes more energy efficient and $1 billion in grants for affordable housing energy upgrades.

The bill would direct the government to negotiate with drugmakers for lower prices on certain medicines, and cap what seniors on Medicare pay for drugs each year at $2,000. The measure also requires pharmaceutical companies to rebate Medicare if they raise the prices of their drugs more than just account for inflation.

The plan would also extend to 2025 an expansion in Affordable Care Act premium subsidies that’s currently set to end at year-end. This will lower prices for millions of Americans, according to a summary of the deal.

(Updates with more details about the energy, health proposals)