Several Western states are facing off this spring over the future of their power production, an escalating war of words and—increasingly—litigation, stretching from America’s coal core to its aspiring clean energy coast.

Wyoming set aside $1.2 million in taxpayer money for the sole purpose of suing any state that divests from its coal. And in neighboring Montana, owners of the Colstrip coal-fired generating station are fighting over whether to double down on the massive plant or exit the coal game entirely, the preference—or mandate—of power companies in the Pacific Northwest.

“Affordable power generated in Colstrip helped build Seattle’s big tech economy,” Montana Gov. Greg Gianforte (R) said May 3, signing a law to move disputes among its owners from Washington state to courts in Montana. “But now woke, overzealous regulators in Washington state are punishing the people of Colstrip with their anti-coal agenda.”

Wyoming, which produces more coal than the nation’s next six states combined, sees fighting for the industry as a Republican litmus test, said Rob Godby, acting associate dean for environment and natural resources at the University of Wyoming.

“They’re trying to delay for as long as possible the transition away from coal, a transition that is so painful to Wyoming, anything they can do to delay it becomes an option,” said Godby.

“Coal is finding itself less and less competitive relative to other sources of electricity generation,” he said. “Pointing a finger and blaming another party is just much easier than blaming market forces.”

“I loaded the gun for a reason,” said Haroldson, who wants Wyoming to sue its neighbor to the south—a move that environmentalists scoff will succeed.

Caught in the Middle

Regional utilities that provide power in the West are caught in the middle.

“Policy divergence between the states that want to move faster and farther than where federal policy is, and those states that have more interest in preserving traditional industries, is a huge challenge,” said Scott Bolton, vice president of external affairs for PacifiCorp, the largest grid operator in the West.

“Renewables is not a political choice with us,” Bolton said. “We’ve invested billions, and reinvested, to squeeze more efficiency out of renewables and lower the overall cost for customers.”

But when PacifiCorp subsidiary Rocky Mountain Power said it wanted to retire several aging coal-generation plants in Wyoming ahead of schedule and invest in new wind energy, transmission, and battery storage projects, Republican Gov. Mark Gordon ordered an investigation. He said the plan would “significantly impact the state of Wyoming and her workers.”

In Montana, four co-owners of Colstrip Steam Electric Station sued the other two May 4 over the new law (S.B. 265), designed to settle disputes on the coal plant’s home turf. 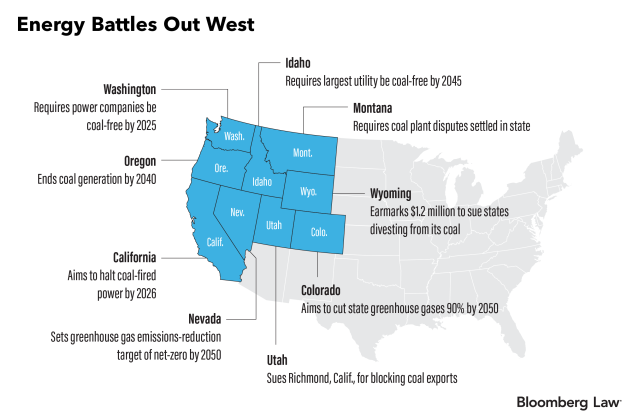 In neighboring Wyoming, the $1.2 million set aside last month shows the state is serious about challenging “laws or policies that impermissibly impede Wyoming’s ability to provide electricity to consumers from coal-fired plants,” said a spokesman for the governor.

“The appeals will take place over years,” he said. “And meanwhile, the transition will happen.”

And while it’s happening, attorneys are the only ones who will profit, said Anne Hedges, director of legislative and policy affairs for the Montana Environmental Information Center.

“The winners in this legal morass are the lawyers who will clutter the court system, waste taxpayer money, and squander precious time arguing over unconstitutional laws,” she said.

Colorado lawmakers are considering a measure to boost funding for a newly created coal-transition worker assistance program, noted Salazar. The bill (H.B. 1290), approved by the Colorado House May 20 and sent to the Senate, sets aside $15 million to invest in coal transition communities.

But not all jobs are created equal, said Frances Koncilja, an energy attorney in Denver and a former Colorado Public Utilities Commissioner.

“Coal provides good-paying jobs” and lawmakers in coal states “have to do something to protect their property tax bases and the careers that mining supplies,” she said.

“Environmentalists seem not to be at the table to develop plans to deal with the loss of revenue for these small communities,” said Koncilja, claiming that green jobs on average pay 20% less than those in the extractive industries.