The federal government this week will announce the drought forecast for the arid Colorado River Basin, as well as possible cuts western states must make to conserve more water from a supply serving roughly 40 million people.

The Bureau of Reclamation Tuesday will issue its projection for conditions over the next two years in the West’s most important water supply—and the news is expected to be bleak.

The Colorado River Basin for the past 20 years has experienced worsening drought, with record low water levels right now, as the seven states in the Colorado River Compact — Colorado, Arizona, California, Nevada, New Mexico, Utah and Wyoming — collaborate to tackle the crisis without imposing more punishing measures on themselves.

Drought affects the water supply for residents in the area but it also impacts the entire country’s food supply because of the consequences on crops and livestock.

“We’re all waiting with bated breath for what the bureau will decide,” said Rep. (D-Colo.) last Friday. Neguse shepherded wildfire response and drought resiliency legislation () through the House in late July but it faces uncertain prospects in the Senate. 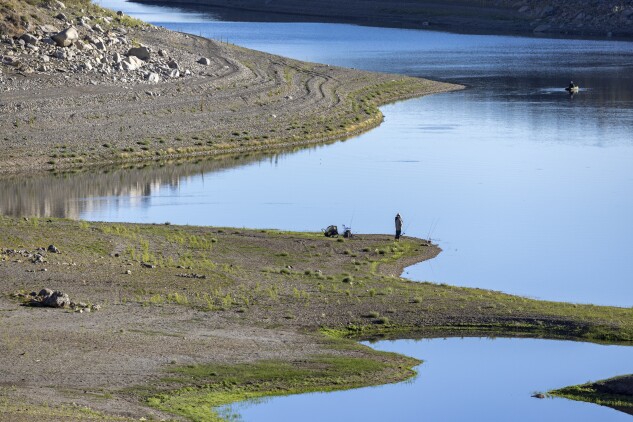 People fish along a shoreline with very a low water level at Grant Lake, which is fed by now-nearly snowless mountains in the Eastern Sierra Nevada, on Aug. 11, 2022, near Lee Vining, Calif.
Photo: David McNew/Getty Images

Reclamation Commissioner Camille Touton in June told the states to reach agreement by mid-August on how to conserve between 2 million and 4 million acre-feet of water in the next year in Lake Mead and Lake Powell, the basin’s largest reservoirs, or the federal government would do it for them. That could include imposing more water use limits on the Colorado River Basin states, which would likely prompt litigation.

“We will protect the system,” said Touton at a June 14 Senate Energy and Natural Resources Committee hearing, adding that the agency was prepared to take unilateral action.

Western Democrats fought to secure $4 billion in additional drought resiliency funding in the tax, climate, and health legislation () that President Joe Biden will sign into law today. That money could help ease some of the pain the Upper and Lower Basin states are facing. The 2021 bipartisan infrastructure law () also included $8.3 billion for Reclamation to upgrade water delivery systems, invest in water recycling, and address drought.

“The most important thing we can do in the Congress is provide federal resources for the Lower Basin and Upper Basin states to be able to make the necessary investments for water conservation projects and other steps that we know can be taken to ultimately mitigate the impacts of the drought,” said Neguse.

The Arizona Department of Water Resources on Monday confirmed it had received an invitation to Reclamation’s Tuesday briefing. Some state water agencies, including those in Colorado and Arizona, were reluctant to discuss negotiations before the briefing. The Association of California Water Agencies—the group that advocates for California’s public water agencies—also declined to comment due to the sensitivity around ongoing talks.

The Upper Basin states—Colorado, New Mexico, Utah and Wyoming—sent their five-point plan to Touton in July outlining additional measures to comply with her June mandate.

But the states also said the effectiveness of their plan was contingent on the Lower Basin states—Arizona, California, and Nevada—as well as Mexico, doing their part. “Reclamation data shows that Lower Basin and Mexico depletions are more than double the depletions in the Upper Basin,” wrote Charles Cullom, executive director of the Upper Colorado River Commission, in a July 18 letter to Touton. “Therefore, additional efforts to protect critical reservoir elevations must include significant actions focused downstream of Lake Powell.”

The Upper and Lower Basin states take about 10 million acre-feet of water from the river every year. Each state is allocated a different amount of water they can use annually based on need and water rights.

The water conservation target of 2 million to 4 million acre-feet of water is significant, Sen. (D-Ariz.) said in an interview this past weekend. His state will likely end up in Tier 2 of the tiers under the Colorado Drought Contingency Plan after Reclamation makes its decision this week, he said.

Congress enacted the plan submitted by the states in 2019; shrinking water levels trigger more austere measures. Under Tier 2, farmers and other agricultural sectors would experience more cuts in water consumption. At Tier 3, more communities and cities will start to face water rationing.

Arizona has less seniority compared to other states in the basin. Those states with senior water rights have a higher priority date and are at the head of the line for water. Arizona uses about 2.8 million acre-feet of water annually.

Kelly on Tuesday asked Interior Secretary Deb Haaland to outline the department’s “options and legal authorities” for intervening to prevent “drastic consequences” for the basin states after they failed to reach consensus by Reclamation’s deadline.

“Such options should recognize and account for the early and consistent contributions that Arizona has made and will continue to make to preserve water levels in Lake Mead and Lake Powell,” Kelly wrote in the letter.

To contact the editors responsible for this story: at sbabbage@bgov.com; at asmall@bgov.com