The third-biggest water reserve in the world, the Hindu Kush Himalayan region, is poised to lose one third of its glaciers by the end of the century, even under the most optimistic climate mitigation scenario, according to a study published Feb. 4.

Also known as the Third Pole, the region stretches across Afghanistan, Bangladesh, Bhutan, China, India, Myanmar, Nepal, and Pakistan, and is the source of 10 large Asian river systems that provide water to more than 1.6 billion people downstream, about one-fifth of the world’s population.

The Hindu Kush Himalayan peaks act like “chimneys,” pulling up currents coming from polluted plains of India and Pakistan and increasing the concentration of climate-warming black carbon and other particles at higher altitudes, said Paolo Bonasoni, a researcher with the Italian National Research Council in Bologna.

Bonasoni led one of the first high-altitude research efforts to monitor pollution in the Himalayan region.

“This in turn increases local temperatures and deposits a black coat [of particulate matter] on the ground, which captures sunlight and speeds up ice melt,” Bonasoni said.

Even an average global warming of 1.5 degrees Celsius (2.7 degrees Fahrenheit) above pre-industrial times by 2100—the most desirable mitigation outcome under the Paris Agreement on climate change—would throw the Hindu Kush Himalayan ecosystem out of kilter and affect hundreds of millions of people who rely on it through farming, grazing and drinking water, researchers said in a landmark report published Feb. 4.

The disruptions could include floods, water shortages, and disrupted monsoon cycles.

Because of the chimney effect, warming of 1.5 degrees Celsius globally would mean 2.1 degrees Celsius (3.6 degrees Fahrenheit) warming in the Hindu Kush Himalayan region, according to Philippus Wester, research lead for the study and regional program manager with the International Center for Integrated Mountain Development (ICIMOD).

“This is a dangerous threshold after which climate change becomes catastrophic,” he said, adding if current emissions continue unabated, 64 percent of the Hindu Kush Himalayan ice cover will be lost by 2100. 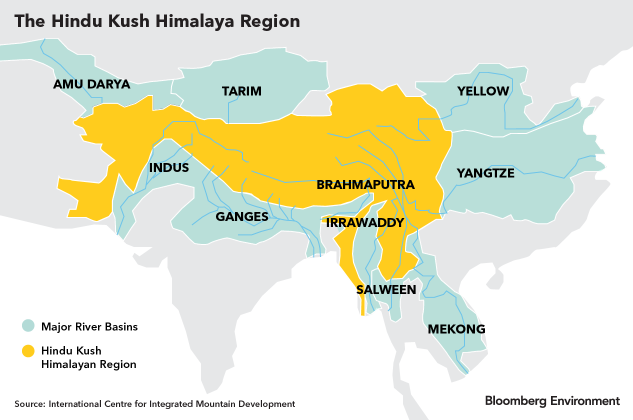 The result of five years of work by a multidisciplinary team of 350 researchers, the Hindu Kush Himalaya Assessment draws on the methods used by the Intergovernmental Panel on Climate Change, and collates the peer-reviewed literature.

“This study speaks to decision-makers across the board, not just governments, but also to civil society and the private sector,” Wester said.

The Hindu Kush Himalayas now include 60,000 square kilometers (23,166 square miles) of glaciers, according to the ICIMOD, an intergovernmental learning and knowledge center in Nepal.

Much like the IPCC’s latest report on 1.5 degrees of global warming, the center’s assessment could help raise awareness at a time when the urgency of climate change is grossly underestimated, said Bonasoni.

Despite well-established scientific evidence, there is still too little public awareness of the complex interaction between pollution, industrialization, and climatic changes, he said.

The report also found that climate change compounds deforestation, mining waste, and overgrazing, which are growing in tandem with population and economic development. It warned that a lack of cross-border cooperation will likely undermine sustainable management of the region’s natural resources, exacerbating climate change problems.

James Crabbe, climate change researcher and fellow at Oxford University in the U.K. who spent years studying the Himalayan region, said the study’s findings are grim but unsurprising.

Highlighting the financial consequences of climate change may be the only incentive strong enough to get policy-makers working together, he said.

Crabbe’s most recent research puts a price tag on global emissions from thawing permafrost, much of which come from the Tibetan plateau in the Himalayan region. His team found that if emissions from the loss of permanent ice—which involves releases of potent heat-trapping methane—are not mitigated, then up to $42 trillion could be lost globally by the end of the century.

As for the Hindu Kush Himalayan region, until there are new governance models to even out the power of various nation states, emissions will remain out of control, he said.

“The main impacts are going to be downstream, in India, in the Mekong Delta,” where nations have no control over decisions taken upstream, he said.

“We need a global approach, because nation states are still very reluctant to do the right thing and give something up individually,” Crabbe added.

To contact the reporter on this story: Lou Del Bello in Delhi at correspondents@bloomberglaw.com