Increasing attention to pending natural gas pipeline projects in Virginia may drive opponents as well as supporters to the polls in the state’s critical state legislative elections this fall.

Control of legislatures is politically vital in states like Virginia, where it is central to redrawing voting district maps after the 2020 census. Primaries for legislative seats in the Commonwealth are set to be held June 11.

Opposition to the pipeline projects—the Atlantic Coast Pipeline and the Mountain Valley Pipeline—is strongest in the areas directly impacted by their routes, but the issue is taking hold in other parts of the state. In addition to environmental impacts, opposition has cropped up over taking of land that is needed to build the pipelines, as well as concerns about potential gas leaks and explosions.

But the industry and its supporters say natural gas is an abundant and affordable fossil fuel that is cleaner than coal and oil. They say the pipelines are needed, and that their construction and operation help boost local economies.

“I have no doubt it will affect” participation in the upcoming elections in Virginia, Richard Shingles, a professor emeritus with Virginia Tech’s political science department and an anti-pipeline activist, told Bloomberg Environment.

“We have several local races where the pipeline is at the top of voters’ minds for sure,” agreed Del. Sam Rasoul (D), the incumbent for state House District 11 in Roanoke, which will be directly impacted by the Mountain Valley Pipeline. Rasoul is running unopposed in the upcoming election.

The 42-inch in diameter, 600-mile Atlantic Coast Pipeline project, developed by Dominion Energy Inc., Duke Energy Corp., Piedmont Natural Gas, and Southern Company Gas, would cross West Virginia, Virginia, and North Carolina. Legal and regulatory decisions have pushed back the start date several times, and its price tag has ballooned to as much as $7.5 billion, with full service now slated for early 2021. 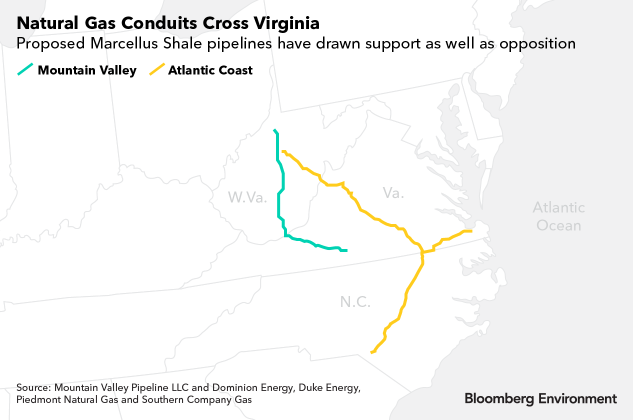 Work on that project is currently on hold as the companies seek U.S. Supreme Court review of the denial of a federal right-of-way permit.

The pipeline is being constructed and owned by Mountain Valley Pipeline LLC, a joint venture of EQM Midstream Partners LP, Con Edison Transmission Inc., and three other companies, and is slated to begin operations toward the end of 2019.

Natalie Cox, a spokeswoman for the Mountain Valley Pipeline project, said the project is about 80% complete and “construction activities are beginning to ramp up again” with the coming of warmer weather.

The Atlantic Coast Pipeline will run through about a dozen of Virginia’s 95 counties and directly impact a number of independent cities including Chesapeake and Staunton. The Mountain Valley Pipeline is planned to run through Craig, Franklin, Giles, Montgomery, and Roanoke counties and terminate in Pittsylvania County.

Opposition has been building over the past few years and environmental groups are increasingly pressing local candidates in Virginia to address this issue, Shingles, from Virginia Tech, said.

“As with the 2020 presidential and congressional races, pipeline opposition and support may be important in mobilizing some voters in both parties for the state legislative elections,” said Karen Hult, chair of Virginia Tech’s political science department.

But Hult said the projects’ impact on voting in 2019 and 2020 appears likely to be “relatively negligible for most races, though it could be important in closely contested races in districts where pipelines are or are slated to be routed and installed.”

The pending pipeline projects “clearly have been the targets of intense public opposition,” but they also are supported by some due to their potential contributions to local economies, she said.

Karenna Gore, director of the Center for Earth Ethics at New York’s Union Theological Seminary, said opposition to the pipelines is mounting as people become more aware of the projects’ impact on the environment.

Gore, the daughter of former Vice President Al Gore, cited an “overbuild” of such infrastructure projects because natural gas was considered friendlier to the environment than other fossil fuels. She participated in recent rallies with other advocates against both pipelines in Richmond and Leesburg, Va., that also focused on environmental justice concerns over the location of a compression station in historically black Union Hill.

Gore also cited a need to overhaul the Federal Energy Regulatory Commission, saying its role must be more focused on the climate impact of projects and potential competition from renewable energy.

“We also need to stand very clearly for the right of the state governments to protect their local water,” she said.

Ruby said most Virginians are aware that they need infrastructure to power their homes and the economy, and want to move away from coal and toward cleaner natural gas. Dominion is taking a number of steps to address climate change, including significant investment in solar and offshore wind, he said.

“We actually agree with environmentalists more than you would think,” Ruby said.

“You need far more gas than you could truck in,’’ Farrell told Bloomberg News in an interview on the sidelines of an Edison Electric Institute conference in Philadelphia. “There is no Plan B.”

“We understand that the efforts and progress we have made to plan and design a pipeline route that will protect cultural and historic resources, as well as preserve sensitive and environmental species, may not satisfy those opposed to underground, natural gas infrastructure,” she said.

The issue has grown over the past year, said Rasoul, the Virginia delegate, and a range of groups including Americans For Prosperity, the NAACP, and environmentalists are lining up against the pipelines.

“Those perceived to be very close to Dominion will be in more and more of an uncomfortable position,” he said.

State Sen. John S. Edwards (D), the incumbent for District 21 in Roanoke, says he opposes the Mountain Valley Pipeline, and “all the localities in my district have come out against the pipeline officially.”

“If you’re running for public office here, don’t come out in favor of the pipeline, it’s not a wise thing to do,” said Edwards, who isn’t being challenged for his state Senate seat in the upcoming elections.

Opposition to the Atlantic Coast Pipeline is the central issue in the campaign for the 20th state House district of Jennifer Lewis, a Democrat from Waynesboro.

“Instead of investing in short-lived, billion-dollar projects like the pipeline, which would only be in service for roughly 10 to 15 years, we need to break our dependence from fossil fuels and move towards clean energy projects like wind and solar,” she said.

One of Lewis’ potential opponents for the House District 20 seat in Staunton, Republican John Avoli, said that as the pipeline is a federally permitted project, lawmakers are powerless to stop it. But Avoli said state and local elected officials can influence the path of the project.

“I am a property rights guy” that is against seizing private land for private projects, he said.

The region has a significant amount of national forests and other land that is federally owned which the pipeline projects should run through rather than going through private property, according to Avoli. Doing so “would have avoided a lot of controversy,” he said.

But Avoli said more pressing issues need to be addressed in the region, such as the opioid crisis, public education, and workforce development. The pipeline is a federal project and Virginia legislators can’t stop it, regardless of what his potential Democratic opponent claims, he says.

Bourne didn’t immediately respond to Bloomberg Environment’s requests for comment. But he told the Staunton News-Leader he doesn’t think delegates have control over pipeline-related issues.

The two lines being built in Virginia aren’t the only pipeline projects facing legal and other hurdles.

New York recently denied a crucial permit for the $1 billion Williams Cos. shale gas pipeline, and the Michigan attorney general is suing to halt permits for an existing pipeline owned by Enbridge Inc.

“We can’t let Virginia fall prey to the same issues that have plagued states like New York, where one of the largest and most populous counties in the state, Westchester County, is now suffering a moratorium on new natural gas hookups because politicians have consistently blocked the energy infrastructure necessary to connect energy markets to consumers,” said Miles Morin, executive director of the Virginia Petroleum Council.

The Atlantic Coast and Mountain Valley pipelines don’t appear to be as big of a political issue outside of Virginia.

In West Virginia, the state “has shifted pretty significantly to the right in the last several decades and a sizable portion of the electorate is focused on employment in the other fossil-fuel industry, coal,” according to John Kilwein, a West Virginia University political scientist.

To contact the reporter on this story: (Bloomberg Environment) in Raleigh, N.C. at aballard@bloomberglaw.com