Vinyl may be the sweetest-sounding format to many audiophiles, but it can be particularly nasty from an environmental standpoint.

Short for polyvinyl chloride, or PVC, vinyl is made in part from fossil fuels like natural gas. The record albums themselves can also contain other toxic additives, such as carbon black and heavy metals.

So a growing number of companies are experimenting with materials and production methods aiming to minimize the environmental footprint of vinyl records.

“I think people today are paying more attention to the materials in the products they buy. Environmental consciousness is a big driver, even for people buying records.”

Though vinyl is still a niche compared to its pre-digital heyday, 2018 record sales are expected to reach 16 million, about 14 percent higher than last year, according to new data from Nielsen Music.

Leading the charge to clean up vinyl’s reputation is a group of eight Dutch companies, called Green Vinyl Records, working to develop a more sustainable product.

One of the first areas they looked into was to improve energy efficiency and to cut waste.

“We found that by using injection molding we could make records much faster, and use about 60 to 70 percent less energy than the old pressing machines,” said Pieter van Ettro, a project engineer for Symcon, a Dutch maker of compact-disc equipment.

By injecting the plastic directly into the grooves, van Ettro said, they don’t need the steam boilers traditionally used to heat the vinyl before stamping the grooves into it.

“It also creates less waste and produces a product that is completely recyclable,” he said. “It also meets and exceeds the durability and sound quality of traditional vinyl.

Recycling old records into new ones is difficult because of the variety of chemicals found in PVC resins, Van Ettro told Bloomberg Environment. It’s also not cost effective.

“We found that creating one kilogram of PVC costs about one euro, and recycling that same kilogram costs about five euros,” he said.

In addition to the energy savings, van Ettro says Symcon is developing a more environmentally friendly alternative to PVC, which the company hopes to debut in 2019. 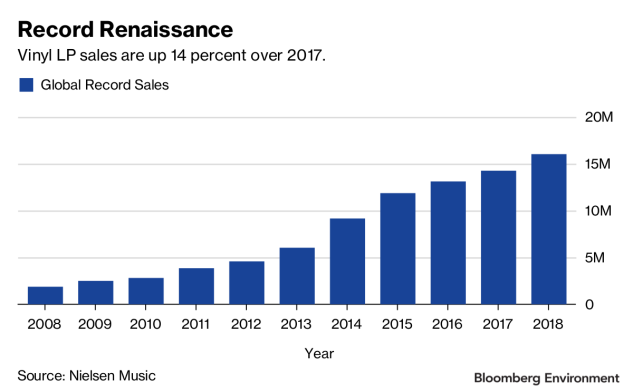 PVC Not Fading Away

While strides are being made to reduce the environmental footprint of record pressing as a whole, finding an alternative to vinyl that is greener while equaling its stability and musical properties remains a difficult task.

“PVC is a very stable plastic with an extremely low flammability and low static charge, so it has always been the ideal material for records,” said Matt Earley, vice president of sales and marketing for Gotta Groove Records, a pressing plant based in Cleveland.

Early told Bloomberg Environment that PVC’s low melting temperature makes it easier to work with than other plastics. Its excellent wear resistance explains why it’s used widely in flooring, countertops, and pipes.

Earlier this year, Gotta Groove experimented with a formulation based on PET, the plastic used in bottles. It didn’t match the playback standards of vinyl—which, as any audiophile can attest, creates something intangible with the sound.

“There are other companies working on potential alternatives, or hybrid PVC formulations,” he said. “I think we and others will continue to experiment.”

One of the biggest differences between a vinyl record in 2019 and the old Bob Dylan and Aretha Franklin LPs in your parents’ collection is likely to be the chemical additives.

To keep the PVC from degrading over time, manufacturers add a stabilizing agent. In the past, common stabilizers included cadmium and lead, both of which are toxic to humans.

“There aren’t too many industries that allow you to use lead these days,” said Viryl’s Rob Brown.

While record companies stopped using cadmium a while ago, Brown says that leaded PVC is still the easiest to use in production.

“But there’s also some newer calcium-stabilized resins, as well as tin and zinc stabilizers,” he said.

An Austrian company made news by debuting a method of pressing records without electroplating. Electroplating is a chemically intensive process used to transfer metals (usually nickel or silver) from a solution onto the surface of a lacquer master disc.

When The Beatles’ iconic White Album was reissued on 180-gram vinyl for its 50th anniversary in November, it sold an impressive 63,000 units its first week, a full 52,000 of which came from physical album sales, according to Billboard Magazine.

Unlike plastic bags or bottles, though, very few of those albums are likely to end up in a landfill.

“People tend to hold on to records,” said Duncan Oswald, a senior consultant at Eunomia, a U.K.-based environmental research consultancy.

“There are certainly many more important environmental problems to worry about,” he said.

In fact, in a market characterized by an ever-expanding range of media choices, Gotta Groove’s Earley said vinyl records are an ethically sound investment.

“For music fans, I believe a vinyl record is a thing worthy of consideration and adoration, and as long as you don’t throw your records in the trash after a couple plays, the environmental concern of consuming records is minimal.”

(Story corrected to reflect that PVC is primarily derived from natural gas, not oil.)