This aerial view shows a combine harvester collecting soybeans under hanging solar panels on an agrivoltaic site in Amance, eastern France in October 2022. The US government hopes to inspire similar projects in the US.
Photographer: Patrick Hertzog/AFP via Getty Images

Flat, sunny acres of land are prime real estate for solar energy developers who hold a key role in helping the US meet its climate goals.

But developers are often eyeing fields of wheat, corn, and hay; ranches roamed by cattle and sheep; and plots bursting with berries and lettuce. If built there, solar panels can level farms that feed the country. Yet federal energy officials and university researchers believe there’s no conflict.

The Energy Department is scaling up the emerging field of “agrivoltaics,” which seeks innovations in both solar technology and farming techniques that can produce clean energy and food at the same time, on the same plot of land.

The aim is to meet US climate goals while reducing conflicts with farmers and providing benefits to local communities, said Michele Boyd, a program manager in the department’s Solar Energy Technologies Office who leads the agrivoltaics portfolio. 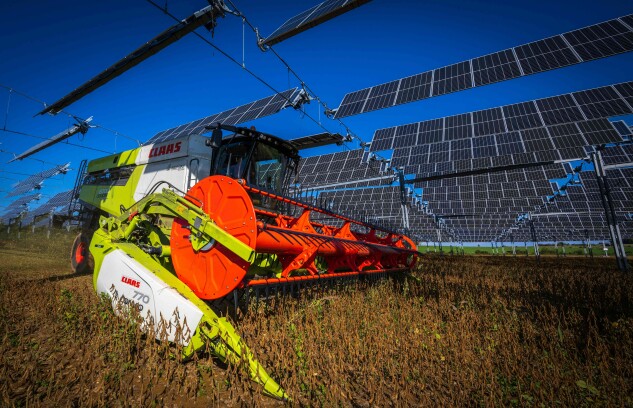 A farmer drives a combine harvester to collect soybeans under hanging solar panels on an agrivoltaic site in Amance, eastern France in October 2022. The US government hopes to prompt similar projects in the US.
Photographer: Patrick Hertzog/AFP via Getty Images

The department in December announced $8 million for another six research projects that plan to assess issues like soil health, grazing methods, and outreach to minority farmers. Those projects follow four initial studies in 2020 funded by DOE, which has been researching the issue since 2015.

Agrivoltaic sites have been proven to work, Boyd said, evidenced by more than 300 such sites spanning nearly 11,000 acres and totaling more than one gigawatt in project capacity. They’re part of an online registry assembled by the department’s National Renewable Energy Laboratory. Most involve a pollinator garden, with plots of grazing livestock and growing crops less common.

The goal now is to gather data and best practices to deploy the sites to farms across the country, widening the scope of land for solar developers and providing farmers with another revenue stream, Boyd said.

Solar energy is a crucial part of the Biden administration’s plan to achieve net-zero emissions from the power sector by 2035. Solar could provide 40% of US electric generation by 2035, up from about 3% of the country’s power supply in 2021, according to the Energy Department. But just one megawatt of ground-mounted installations—which can power, on average, roughly 173 US homes—requires 3 to 10 acres.

The Energy Department estimates utility-scale solar installations are expected to span between 4 million and 11 million acres of land by 2050, translating to potentially more land than Maryland, Delaware and Washington, D.C., combined. 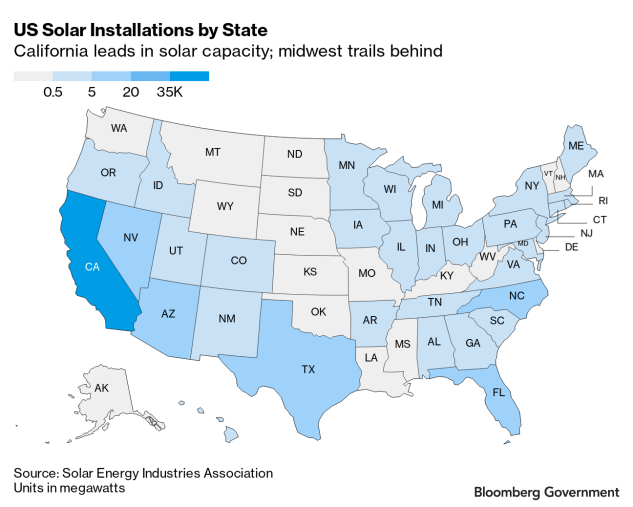 While prompting concerns from some communities, the solar land grab has created an opportunity for farmers facing yo-yoing fertilizer prices and growing uncertainty around the world following Russia’s invasion of Ukraine. Climate change-fueled drought, floods, and wildfires have challenged an already difficult business, and farms continue to sell to housing developments; the number of farms fell by more than two-thirds over the last decade, according to Agriculture Department data.

Solar and farming can operate at the same time, but “it’s like a Reese’s peanut butter cup,” said Andrea Gerlak, director of the University of Arizona’s Udall Center for Studies in Public Policy. “You want to bring the chocolate and the peanut butter together.” Gerlak is also the social science lead on the university’s DOE-funded project to pilot agrivoltaics in the southwest.

There have been early innovations. Gerlak said shepherds found success letting flocks graze on solar plants because sheep are both small enough to fit beneath the panels, and gentle enough not to chew them.

Farming can also help solar panels. Arid land around solar installations can be a problem, blowing dust and hurting farmers next door. Planting crops like broccoli keeps the back of panels cool while conserving water—a win-win for plants and solar productivity, and especially important in the drought-plagued West.

The DOE-funded research projects are trying a number of approaches to benefit both solar and food production.

A study led by the Ohio State University plans to use complementary grazing strategies — such as deploying sheep to manage vegetation near solar panels where it would be difficult for equipment to reach. Researchers also hope to use precision agriculture technologies at an operating utility-scale solar site to produce hay, said Braden Campbell, an assistant professor at the school.

“There’s a really strong hay market for our ruminant species here in Ohio and across the Midwest,” Campbell said.

Another project, led by Rutgers University, will experiment with more elevated solar panels and fence-like installations that can soak up morning and evening sun but create wider rows for moving farm machinery.

At the school’s three research farms, researchers over the course of four years will study soil health under panels and plant a wide variety of crops, fruits, and vegetables in the hopes of establishing a regional agrivoltaics network, complete with a new class of agrivoltaics experts and advisers that can link the two industries.

While there’s been a fair amount of modeling, “we don’t know the answer to it really until we go out and grow the crops,” said Ethan Schoolman, an assistant professor in the school’s Department of Human Ecology.

Wetherill said he heard from a farmer who wants to draw solar energy to power his irrigation system. Rising consumer demand for food grown with solar energy could open up new markets, he said.

“What happened in the past is: Minority farmers believe that they are the last to be told about emergent technologies and the actual benefits to be derived from them,” Wetherill said. “We want to get them involved.”

Still, myriad questions remain: How can farmers and solar companies ensure the process benefits them both? Which crops and animals fare best on solar fields? Who’s liable for damage to solar panels as farmers tend the fields?

Federal actions like this round of DOE funding will help answer those questions and move agrivoltaics forward, said David Gahl, executive director of the Solar and Storage Industries Institute. He said farm and solar industry groups “clearly have many members that are interested” in the nascent industry.

And farmers may reap environmental benefits, particularly in the drought-stressed West.

Stacie Peterson, energy program director at the National Center for Appropriate Technology, said projects have shown crops grown beneath solar panels can halve farmers’ water needs, “which could have a huge impact.”