Tiehm's buckwheat, which grows above a lithium mine in Nevada, is the subject of an Endangered Species Act review by the U.S. Fish and Wildlife Service.
Photo: Nevada Natural Heritage Program

A rare, pale yellow wildflower that seems to grow only in one place in Nevada has become a major headache for ioneer Ltd.’s planned $800 million lithium and boron mine.

Lithium is a key part of the global push toward a clean energy future, and ioneer Executive Chairman James Calaway says the mine could quadruple the metal’s production in the U.S. However, the mine could also wipe out Tiehm’s buckwheat, which needs the area’s unique harsh, lithium and boron-rich soil to survive.

Lithium is used to make batteries that power cell phones, electric cars, and a variety of other technologies and consumer goods. Its extraction globally has spiked in recent years, but the U.S. is not a major player, producing only 1% of global lithium minerals. That figure could soon rise, though.

President Joe Biden signed an executive order in January calling for a review of domestic supply chain risks, and Energy Secretary Jennifer Granholm announced in March up to $30 million to support research that ensures American businesses have reliable supplies of critical minerals such as lithium.

Calaway, who drives a Tesla Model S, said ioneer’s mission is to “make the materials necessary for a sustainable planet.” He estimates the Rhyolite Ridge mine will be able to produce enough lithium in chemical form to build about 400,000 electric cars per year for the next 25 to 30 years.

But Tiehm’s buckwheat only grows on the public lands where the Nevada facility is slated to be built, and the number of plants has decreased sharply in recent months.

A Nevada federal court last week granted an environmental group’s emergency petition relating to Tiehm’s buckwheat, and ordered the U.S. Fish and Wildlife Service to decide, by May 21, whether to list the plant as endangered. It also must decide whether critical habitat for the species needs to be set aside.

The federal government said late last week it won’t be able to make that deadline and that the court is asking that it weigh too much. It’s “infeasible for the agency to complete the ordered actions within the prescribed time frame,” the government said in a motion to the court.

The court’s order to prepare proposed listing and critical habitat rules also is “beyond what the statute requires,” according to the agency, which seeks a motion to stay the ruling.

The Fish and Wildlife Service said that what it can do over the next three weeks is decide whether listing the species is “warranted,” “not warranted,” or “warranted but precluded by higher-priority listing decisions.”

The court has yet to decide whether to change its May deadline. Meanwhile, the group pushing for the listing review says the agency needs to focus on the task at hand.

“The Fish and Wildlife Service is spending more energy fighting our litigation than they are protecting the buckwheat,” Patrick Donnelly, Nevada state director at the Center for Biological Diversity, said in a statement.

The agency is trying to stall the review process while it comes up with a “bunk” conservation agreement with the mining company, Donnelly said.

“We intend to fight back until this rare plant gets the protections it needs to survive,” he added.

After the Fish and Wildlife Service proposes to list a species under the ESA, it’s required to consider whether certain areas are essential for its survival. That consideration may lead to a critical habitat designation, according to the agency’s website.

But it also says an area can be excluded from such a designation because of “economic impact, the impact on national security, or any other relevant impact.” The exclusions may not apply, however, if it would lead to the extinction of a species, according to the agency.

David Henkin, staff attorney at Earthjustice, said that critical habitat designations don’t restrict the activities of non-federal entities, and that they only come into play if the federal government is involved.

However, a critical habitat designation could be an important tool for a species like the buckwheat to ensure the federal government isn’t involved in activities that could keep a species from surviving.

“There are a lot of situations, particularly involving plants, where designations confer huge protections that the species wouldn’t have in absence of that,” Henkin said. 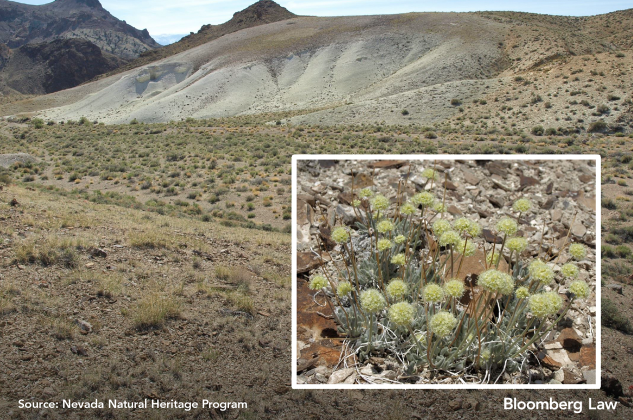 Critical habitat designations can make or break projects, as seen with the U.S. Supreme Court’s 2018 decision on the endangered dusky gopher frog.

The justices reversed a lower court’s decision upholding its critical habitat designation on private property partly because the frog hadn’t been sighted in the area for decades, according to John Simpson, a partner at Duane Morris LLP in Washington, D.C.

“The critical habitat designation, had it been upheld, would have deprived the property owners of millions of dollars in developmental value,” he said.

A Duane Morris spokesperson said the firm was unable to speculate on the legal options for ioneer’s mine.

Rhyolite Ridge holds the “largest known lithium and boron deposit in North America,” according to ioneer’s website. It’s located just across the border from California, near Death Valley National Park.

The majority of the project’s cost is not the mine itself, but a chemical plant that will convert the raw material into material that goes into batteries, according to Calaway. But the value of the boron they can extract from area will make ioneer’s project the lowest-cost lithium production facility globally, he said.

Calaway also emphasized that every project has some adverse environmental effects, but ioneer has made efforts to minimize those to the extent that it can.

“No lithium production can be done with no impact,” Calaway said. “All of them have impact.”

Their mine is completely green-powered, it has low water usage, and no greenhouse gas issues, Calaway said.

“We’ve done everything to make this the most environmentally friendly production facility there is,” he said.

The Center for Biological Diversity says the mine would destroy up to 90% of the population of Tiehm’s buckwheat. Calaway is confident that ioneer can move the wildflower out of harm’s way.

“We’re highly confident that we can carefully transplant these plants that we have to remove a few hundred yards away to the same soil types, the same environmental conditions, where we’ve already grown the plants from seeds and seedlings,” Calaway said.

“We’re keeping certain percentages of the population intact and protecting it like crazy,” he said.

But more than 17,000 plants, about 40% of its total population, has already mysteriously disappeared over the past year. Related to that loss, Donnelly wouldn’t directly say anyone connected to the mine was responsible. He did say in September though that the plant’s destruction appeared to be a “premeditated, somewhat organized, large-scale operation.”

Calaway insists that ioneer had nothing to do with it, citing reports by the federal government that animals were most likely responsible.

Referring to Donnelly’s organization, he also said, “It turned out that they were totally irresponsible in making such an outlandish claim.”

The District of Nevada said in its court order that, while the exact cause of the plant’s destruction is uncertain, the federal government and the Center for Biological Diversity both acknowledge the “ongoing and alarming threat to the species” that presently exists.

Calaway said ioneer will put up “extreme barriers for animal infiltration,” and he said the company has botanists working continuously to protect the plants.

“I’m really excited about demonstrating how to do this right,” he said. “To be the gold standard for how you build industrial capacity for lithium around the world. To set the standard for care and quality and diligence.”

Moving a species is fraught, and there are more failures than successes, according to Naomi S. Fraga, director of Conservation Programs at the California Botanic Garden and research assistant professor at Claremont Graduate University.

There are so many unknown factors that contribute to species survival, and often there’s very little known about the biology of the plants, she said.

“It’s one thing to grow plants in a nursery, take them out, and plant them and get them to survive,” Fraga said. “It’s another thing as to whether you can establish a whole new population.”

It’s important to understand that Tiehm’s buckwheat doesn’t exist in isolation, she said. It has a whole ecosystem at the site where it occurs, and the ecosystem has been evolving for tens of thousands of years, according to Fraga.

“If we value life, I think we need to value all diversity, plants included, because plants are so essential,” Fraga said. “They’re foundational to everything.”

The group has petitioned the federal government to create a one-mile buffer around the buckwheat’s habitat. If ioneer can build the mine outside the perimeter, then the group isn’t going to object, according to Donnelly.

“We’re all in on the renewable energy transition and the role of lithium in it,” he said.

However, the group will “fight to the bitter end” to protect the buckwheat from extinction, according to Donnelly.

“We think if the ESA has any meaning at all it would prevent the mine from destroying this buckwheat’s habitat,” he said.