Water flows in the Mississippi River in Hastings, Minn. in October 2018. The river is part of the waters of the U.S., or WOTUS.
Photographer: Daniel Acker/Bloomberg

The Trump administration’s long-anticipated water jurisdiction rule has already drawn a half-dozen legal challenges since its April release, with more on the way.

The new approach means developers no longer need federal permits for work that affects some types of waterways now excluded from the definition of “waters of the United States,” or WOTUS.

The legal snarl stems from years of disagreement over what counts as a WOTUS under the statute. The question has reached the U.S. Supreme Court multiple times, most recently in 2006, but the justices’ fractured ruling failed to end the debate. 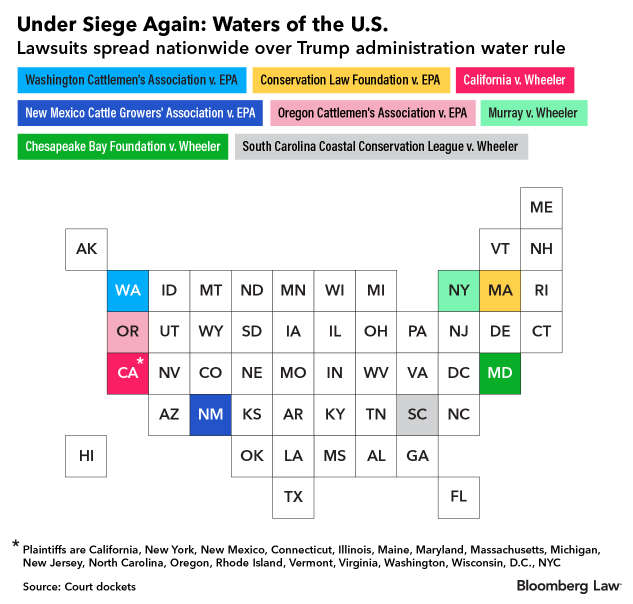 The Environmental Protection Agency maintains that the new rule “will stand the test of time as it is securely grounded in the text of the Clean Water Act and is supported by legislative history and Supreme Court case law.”

Environmental groups and a coalition of Democratic-led states say the new WOTUS definition is “arbitrary and capricious” under the Administrative Procedure Act for several reasons.

First, they say, the joint EPA-Army Corps of Engineers rule runs afoul of court precedent that requires agencies to ensure new regulations comport with the purpose of the statutes they’re implementing—in this case, the Clean Water Act.

The agencies “failed to meaningfully consider the most important aspect of the rulemaking: whether the Rule will frustrate the Clean Water Act’s sole objective” of protecting U.S. waters, the Conservation Law Foundation and other groups said in a lawsuit filed in Massachusetts.

An environmental coalition led by the South Carolina Coastal Conservation League took aim at the Trump administration’s reasoning that state officials would pick up the slack on regulating waters no longer subject to federal oversight.

Evidence in the rulemaking record shows that states lack comparable programs, often can’t adopt laws that are stricter than federal standards, and “failed in every vital aspect to protect national water quality when, before the Clean Water Act, states were in charge of regulating water pollution,” the coalition said in its complaint in federal district court in South Carolina.

Opponents of the new waters rule also argue that the rulemaking process was flawed because the Trump administration knew the outcome from the start.

The Chesapeake Bay Foundation noted that President Donald Trump issued an executive order in February 2017 directing the EPA and Corps to consider rescinding and replacing the Obama-era WOTUS rule.

“For over two years, the Agencies have merely gone through the motions of a rulemaking to support the pre-ordained decision to repeal the Clean Water Rule, without analyzing the merits of that decision or considering any alternatives,” the group said in its Maryland federal court challenge targeting the initial repeal of the Obama-era rule.

The group filed a separate suit challenging the replacement rule.

A pair of New York landowners who say the new WOTUS rule lifts protections for waters on their property claimed the Trump administration “operated with an unalterably closed mind,” violating the Administrative Procedure Act and the Constitution’s due process clause.

Critics say the EPA and Army Corps also violated the Administrative Procedure Act by failing to explain why they were changing course from the Obama administration’s approach to federal water jurisdiction.

A lawsuit from 17 states, plus the District of Columbia and New York City, alleges the new rule doesn’t reconcile its narrowed protections with a 2015 report that showed how “newly excluded waters have a significant impact on the quality and integrity of navigable waters.”

The Chesapeake Bay Foundation argued in its legal filings that the agencies ignored the abundance of scientific evidence that went into justifying the need for the 2015 Clean Water Rule, and failed to conduct any new scientific analysis to support their decision to abandon it.

The Chesapeake Bay Foundation claims in its filing that the Trump administration rewrote the WOTUS definition by adopting one that doesn’t comport with the “significant nexus” standard articulated by now-retired Justice Anthony Kennedy in the Supreme Court’s fractured 2006 ruling in Rapanos v. United States.

The California-led coalition of states argued the 2020 rule “improperly” relies on the late Justice Antonin Scalia’s plurality opinion in Rapanos, even though the majority of justices, including Kennedy, rejected it.

Kennedy pushed for an interpretation on the “significance” of the impact that upstream waters and wetlands have on the chemical, biological, and physical integrity of downstream navigable rivers.

Scalia’s reading claimed jurisdiction over “relatively permanent, standing, or continuously flowing bodies of water” and not isolated wetlands and streams where water flow is sporadic.

The coalition and the nonprofit noted that every appeals court reviewing the issue since 2006 has established a well-settled precedent by determining Clean Water Act jurisdiction by applying the “significant nexus” standard, which the Trump administration has now rejected “without the proper legal justification for doing so.”

No federal appeals court has exclusively relied on Scalia’s reading of Rapanos to claim jurisdiction over wetlands.

“The Clean Water Act jurisdiction was never meant to include waterways that cannot be used for interstate commerce,” cattlemen in New Mexico, Washington and Oregon claim in separate, but related lawsuits that the Pacific Legal Foundation filed on their behalf.

The ranchers further allege that nothing in the Clean Water Act’s definition of “navigable waters” extends the term to non-navigable waters of any sort that are upstream or isolated from waterways that are used exclusively to travel or conduct trade.

They say WOTUS applies only to navigable waters as defined in the Supreme Court’s 1870 opinion in The Daniel Ball, which was the first case to delve into this definition.

The cattlemen in all three states contend that the new WOTUS definition and its prior versions exceed the Clean Water Act authority given to the agencies.

“The 2020 Definition interprets ‘navigable waters’ in the Clean Water Act to include an extensive catalog of ‘tributaries’ that are not navigable and which are not even ‘waters’ for most of every year, as well as non-navigable isolated lakes and ponds, and non-abutting wetlands,” they allege in their complaints.

The cattlemen claim both Scalia and Kennedy cast doubt on the authority of the agencies to even claim jurisdiction over non-navigable, intermittently flowing ditches or streams.

They say the rule illegally includes non-navigable intermittent streams under federal jurisdiction that carry a “garden hose worth of non-ephemeral flow extending over as little as a single week.”

“Categorical regulation of tributaries (including ditches) with flow volumes so low or infrequent that they would not in normal parlance be called ‘rivers’ or ‘streams’ exceeds the scope of the Clean Water Act as interpreted by the Supreme Court,” they claim.