The Environmental Protection Agency and the National Highway Traffic Safety Administration said their Aug. 24 proposal (RIN:2127–AL76) to halt federal fuel economy limits at 2020 levels would offer around $200 billion in net benefits and reduce highway fatalities by 12,700 over the lifetime of vehicles built through 2029, compared to the Obama-era standards.

Critical to the agencies’ justification for freezing the standards is the idea that stricter fuel-economy standards raise prices of new vehicles, decreasing sales and increasing the use of older cars, which are inherently less safe. But critics say the agencies’ methods for crunching the numbers are problematic.

“This entire analysis is based on a house of cards that is going to collapse in front of them,” Jeff Alson, a former senior engineer in the EPA’s Ann Arbor, Mich., vehicles lab, told Bloomberg Environment.

Correcting the administration’s model would practically close the gap between the increased costs the Trump administration projects from Obama-era standards and the benefits it asserts from weaker limits. Several groups, including American Honda Motor Co. Inc., found that the Obama-era standards are safer and cheaper when they adjusted the models.

Honda found the administration’s model improperly boosted the benefits of freezing the standards by $390 billion. Turning off the flawed portion of the model yields $100 billion in net costs for the Trump agencies’ proposal, tipping the scales in favor of the current limits, Honda said in a supplemental analysis filed with its comments.

"[W]e find the use of this previously untested model to be premature and ill-advised,” Honda wrote in Oct. 26 comments on the agencies’ proposal.

Some economists and technical experts say the models will have to be changed in order to hold up to any future court challenge.

“It’s going to take some time to redo,” said Alson, a four-decade veteran of the EPA who worked for much of his career on the fuel economy standards before retiring in April.

The EPA is “in the process of reviewing all comments,” Michael Abboud, an agency spokesperson, told Bloomberg Environment. He didn’t address criticism of the modeling. NHTSA didn’t respond to a request for comment.

The agencies are eyeing March 2019 to finish up the standards, according to the administration’s recent regulatory agenda. But the proposal has already drawn threats of lawsuits from states and environmental groups.

The errors in the analysis stem from a new piece added to NHTSA’s model, the so-called “scrappage module,” said economists, engineers, and academics who reviewed it.

The module was developed to analyze how changes in new car prices and sales due to the fuel economy standards affect the number of used cars on the road—and ultimately how many used cars are scrapped.

Economists and others say the agencies left out a critical part of the equation—consumer behavior—leading to a conclusion that people will drive substantially more under the Obama administration’s limits than the weaker Trump proposed standards. Those additional miles translate into a higher number of fatalities and increase the societal cost of stricter limits. 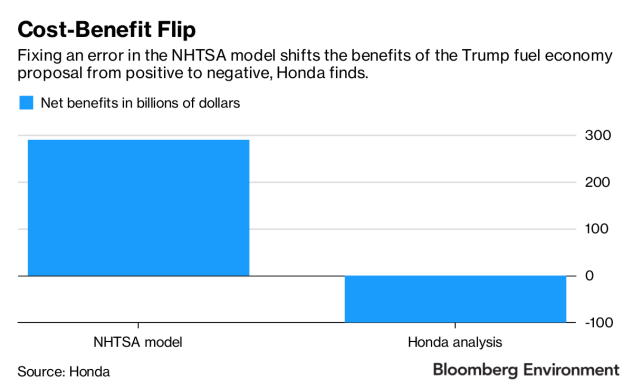 The agencies don’t explain why the difference would be so significant, according to critics. And their model overlooks the choices people make when purchasing or driving cars, which are often individualistic.

“The calculations of the cost are at odds with basic economic theory and are likely to be severely overestimated,” Antonio M. Bento, an economics professor at the University of Southern California with expertise in energy and environmental economics, told Bloomberg Environment. “There’s no economic reason to justify the rollback.”

Bento, in the days after the agencies released their proposal, convened a team to dig into the modeling. Their findings are set to be released in Science magazine in the coming weeks.

Not in the Real World

To some automakers, what is strange is that these additional miles, according to the model, are separate from any impact fuel economy standards have on the cost of driving, they said in comments.

Fuel economy standards make driving more attractive to consumers because they save money on fuel, so they drive more. This effect, known as the “rebound effect,” should account for the bulk of any increase in miles traveled from stricter limits or decrease in miles traveled from weaker standards, the Association of Global Automakers, a Washington-based industry group, wrote in Oct. 26 comments.

But the agencies’ analysis includes a separate, unexplained decrease in miles traveled under the frozen standards.

“We do not understand why this would be, since vehicle scrappage should not have any impact on the total number of miles Americans drive,” Global Automakers wrote, suggesting it is a quirk in the model “one would not expect to see in the real world.”

But that quirk is also the primary driver of the safety benefits the Trump administration claims from holding the fuel economy limits flat, the auto group added.

Nearly all automakers object to a wholesale freeze of the standards. They are urging the Trump administration for limits that increase year over year, but at a slower pace and with more flexibility than the Obama-era limits.

Not all automakers, though, criticized the agencies’ modeling.

In Oct. 26 comments, the Alliance of Automobile Manufacturers recommended the agencies review the analysis “for adoption or to refine their own models.” The group declined to comment for this story.

The agencies say their proposal would increase greenhouse gas emissions compared to the Obama regulation.

But their estimate is undoubtedly low, Joshua Linn, an associate professor in the Department of Agricultural and Resource Economics at the University of Maryland and a senior fellow at Resources for the Future, told Bloomberg Environment.

By understating the number of miles people are driving, the agencies are also directly underestimating the fuel consumption and greenhouse gas emissions from their proposal, he said.

Their proposal would also cause more fatalities than the agencies are projecting, diluting the safety benefits they claim from the weaker limits, Linn added.

Linn and others say the agencies will have to change their model in order to justify any relaxation of the standards.

“I believe that they are going to have to change the model substantially,” Kenneth Gillingham, an associate professor of economics at Yale University, told Bloomberg Environment. “There are such clear problems with the model that to do an analysis that holds up, they’re going to need to make some very large changes.”

And for the EPA, the challenge is even trickier: The agency’s career staff, in interagency comments on the proposal, raised concerns with the NHTSA modeling, but EPA political appointees ultimately signed on to the proposal unchanged.

“I don’t see how a judge would ever say that EPA could not listen to its own staff or model and rubber stamp a model from another agency that’s been roundly criticized by academics, states, and automakers,” Alson, the former EPA engineer, said. “How could that possibly be a legal basis for a major rollback of EPA standards?”