The attorneys said that if Biden goes bigger than then-President Barack Obama did on Bears Ears, it could further inflame GOP tensions over the monument and eventually undermine the new president’s plans if Republicans regain power in Congress in 2022 or if courts place limitations on the Antiquities Act. The act gives presidents the power to create monuments.

Two events this month are expected to help determine the fate of the embattled Bears Ears and neighboring Grand Staircase-Escalante national monuments—both of which former President Donald Trump shrank with the support of many Western Republicans in Congress.

Many Republicans oppose the monuments because they encompass coal, oil, and other mineral deposits and are important for local ranching interests. To those Republicans, the monuments’ creation symbolizes Democratic overreach.

As part of a review of protections that the Trump administration lifted, the White House is taking care to consult with tribes that help to manage Bears Ears. Tribal requests for an expanded monument are expected be given new weight in part because Bears Ears advocate Rep. Deb Haaland (D-N.M.) appears to be heading toward confirmation as the first Native American Interior secretary. 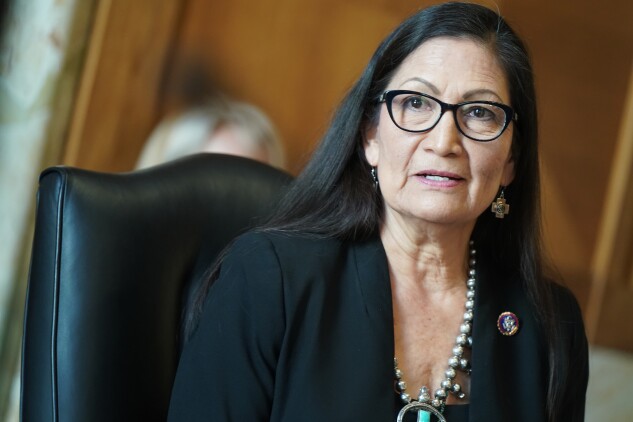 Potential uranium mining, historic site looting, and other threats within an area once protected as Bears Ears make it important for Biden to restore and enlarge the monument quickly, said Matthew Campbell, an attorney for the Native American Rights Fund, which is representing three area tribes, including the Hopi, Ute Mountain and Zuni tribes.

“There’s a sense of somewhat urgency to make sure those places are protected,” Campbell said.

An Interior Department review of Trump’s monument rollbacks is expected to wrap up the week of March 20 and include recommendations for how Biden can restore the monuments. Interior declined to comment about whether the review will be made public.

On Friday, parties to litigation challenging the Trump rollbacks were scheduled to brief the court on whether the lawsuits should be stayed now that Biden is in office and expected to restore the monuments.

But the Justice Department on Friday asked the court to stay the cases and delay the deadline for the briefs until June 3 to allow Interior to complete its review and the White House to respond.

The tribes’ request for a larger monument is part of the review Biden ordered in January. The Navajo Nation, Zuni Pueblo, and the Ute, Ute Mountain, and Hopi tribes, which collaboratively manage the monument along with the federal government, want Biden to honor their original proposal for Bears Ears.

The tribes originally proposed a sprawling 1.9 million-acre chunk of federal land in southeast Utah that would protect Native American historical and cultural sites and numerous canyons and plateaus.

But in 2016, Obama created a slightly smaller monument, which Trump shrank to about 201,000 acres in 2017. Land included in all possible iterations of the monument is already public and under the control of the federal government.

“Tribes have always advocated for the boundary to be 1.9 million acres, so they are continuing to ask for that as well,” Campbell said.

An attorney for the Navajo Nation declined to comment.

Biden is expected to honor the tribes’ request for a more expansive Bears Ears in part because Haaland has long championed the larger monument, said Aaron Weiss, deputy director of the Center for Western Priorities, a Colorado-based environmental group.

But the White House’s strategy to restore and possibly expand Bears Ears and Grand Staircase-Escalante will depend on the outcome of four related lawsuits pending in U.S. District Court for the District of Columbia, including Hopi Tribe v. Trump.

Parties to the cases will file a report Friday about whether Biden’s expected actions are likely to make the dispute over Trump’s rollbacks moot, whether the cases should be stayed, or whether the litigation should continue.

Attorneys watching the cases are divided on what is likely to happen next.

Sharon Buccino, a Natural Resources Defense Council attorney involved in the litigation, said it’s likely they cases will be stayed to give Biden a chance to quickly re-establish Bears Ears and Grand Staircase-Escalante.

“That’s what the 60-day report is designed to do,” Buccino said. “I do think quick action is important.”

Campbell said the tribes he represents want the litigation stayed so Biden can act quickly.

But quick action without a legal opinion might lead to Biden recognizing the legitimacy of Trump’s rollbacks, said Mark Squillace, a natural resources law professor at the University of Colorado-Boulder.

The best outcome for the monument might follow a legal opinion from the Interior solicitor’s office or the Justice Department declaring Trump’s rollbacks a violation of the Antiquities Act and that the Obama-era boundaries remain in effect.

Biden can avoid acknowledging Trump’s rollbacks by signing an order expanding Bears Ears as the tribes are requesting, said Sam Kalen, a natural resources law professor at the University of Wyoming.

But doing so risks a backlash from Republicans and courts unwilling to accept that presidents can use the Antiquities Act to create monuments the size of Bears Ears.

Utah Republicans have threatened to find ways to weaken the act since President Bill Clinton used it to create Grand Staircase-Escalante in 1996.

Earlier ire about monuments in Wyoming spurred Congress to restrict the act’s use there, and Republicans have discussed extending the prohibition to Utah.

“If out-of-state lobbying interests successfully influence the Biden administration to re-expand these national monuments, Utah’s case for an Antiquities Act reform, like state-specific protections Congress has enacted for Wyoming and Alaska, will only be bolstered,” Sen. Mike Lee (R-Utah) said.

To contact the editors responsible for this story: at cmccutcheon@bloombergindustry.com; at ttaylor@bloomberglaw.com