U.S. regulators have been asked to pull sunscreens from the market because of a potential carcinogen.
Photographer: Emily Harris/Bloomberg News

Researchers asked U.S. regulators to pull some sunscreens from the market, including brands such as Coppertone, Banana Boat and Neutrogena, saying they’ve found evidence of a potential carcinogen.

Scientists petitioned the Food and Drug Administration to remove from sale all sunscreens containing the active ingredient octocrylene. Products made with the chemical may contain benzophenone, a suspected carcinogen that also can interfere with key hormones and reproductive organs, according to a group led by Craig Downs, executive director of the nonprofit that studies risks to health and the environment. 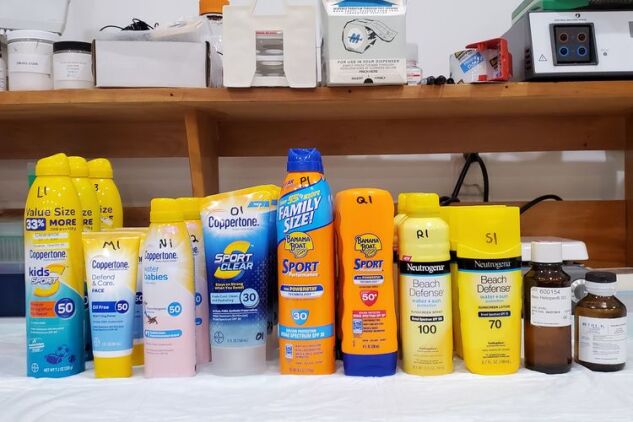 Concerns about sunscreens began heating up in 2019 when the FDA asked manufacturers for safety data on chemical ingredients, including octocrylene. In May, an independent testing lab found levels of , benzene, in several products, leading to some recalls.

FDA research shows that the body absorbs enoughof sunscreens’ chemical ingredients to warrant further testing. Yet there’s no indication companies have provided the safety data the FDA requested two years ago, said David Andrews, a senior scientist at the , an advocacy organization.

The FDA “takes seriously any safety concerns raised about products we regulate, including sunscreen,” said Courtney Rhodes, a spokeswoman. The agency “will continue to monitor the sunscreen marketplace to help ensure the availability of safe sunscreens for U.S. consumers,” while it evaluates the contamination concerns, she said.

Working with researchers at the Paris-based , Downs and Joe DiNardo, a toxicologist who formerly worked in the cosmetics industry, tested 16 octocrylene-based sunscreens purchased in France and the U.S. The brands included ’s Coppertone Water Babies spray, ’s Banana Boat SPF 50 lotion and a Neutrogena Beach Defense spray and lotion from . All of them tested positive for benzophenone.

“We ensure that all Beiersdorf products, including our sunscreens, are rigorously evaluated for safety and efficacy,” Robert Nishiyama, a spokesman, said in an email. J&J and Edgewell didn’t respond to requests for comment.

Beiersdorf’s stock fell 1% at the close in Germany. Edgewell shares fell as much as 1.1% and J&J’s stock was little changed as of 2:16 p.m. in New York

The research “perpetuates misinformation and needlessly misleads and scares consumers about the safety of sunscreen products,” the Personal Care Products Council, a Washington lobby group, said in a statement. The European Union has approved octocrylene for use in sunscreens, the group said.

Based on animal studies, the ’s cancer research arm classifies benzophenone as a possible carcinogen. No data on a potential link with cancer in humans was available, according to the Geneva-based agency.

Research shows that benzophenone in sunscreens can interfere with estrogen, according to the WHO. The hormone plays a key role in the health of women, and disrupting it can lead to early puberty and altered functioning of reproductive organs.

Downs’ study suggests that benzophenone was formed by degradation of octocrylene. Only sunscreens containing the UV blocker tested positive for the contaminant, and the levels increased over time.

Downs has been studying the health and environmental impact of sunscreens for years. His research led Hawaii and other beach tourist destinations such as the U.S. Virgin Islands to ban the sale of sunscreens containing oxybenzone, which is chemically related to benzophenone and octocrylene, because of research suggesting damage to coral reefs.

The Maui City Council’s environment committee is considering even tougher laws for sunscreens. Sales and use of sun products should be restricted to those made with the minerals zinc oxide and titanium dioxide, both deemed safe by the FDA, Peter Landon, a natural reserve system specialist at the Hawaii Department of Land and Natural Resources told the committee Wednesday. Narrowing the field to those two mineral sunscreens would prevent the industry from making small changes to the banned chemicals to get around the legislation, Landon said.

Widely used sunscreens were targeted in May by a separate FDA petition after an analysis by , an independent laboratory that monitors product safety, found benzene in a range of products. J&J recalled all lots of five brands of Neutrogena and Aveeno aerosol sunscreens after the findings were released.

Immediately after J&J’s recall, several class-action lawsuits were filed citing the sunscreen risk. J&J is already facing suits from people claiming their cancers were caused by the company’s talc-based powders tainted with asbestos.

It’s not clear how benzene entered the products. Some part of the manufacturing process may have led to the contaminant’s appearance in sunscreens, Valisure said at the time.

Pressure on the industry may continue into next year, when the U.S. National Academies of Sciences, Engineering, and Medicine, which assembles experts to study key, contentious issues, is expected to deliver a report on sunscreens. On Thursday, a National Academies panel heard a presentation on research linking benzophenones in sunscreens to endometriosis, a painful condition in which tissue that normally grows inside a woman’s uterus forms outside the organ.