Despite President Donald Trump’s hopes, Covid-19 has shown few signs of abating with the warmer weather, and has in fact spiked in a number of states. Now, many health and city planners predict the crisis could get much worse as the U.S. faces what is expected to be one of the hottest summers on record.

The poor, the elderly, and people of color could face the toughest times yet as they are disproportionately being impacted by the coronavirus, and the economic recession will make it harder for many from these communities to afford basic utilities.

The situation will be particularly dangerous for those stuck at home with Covid-19 symptoms, who don’t have—or can’t afford to run—air conditioning. It’s much worse, of course, for those who won’t have a place to stay at all, as temporary eviction suspensions end.

Meanwhile, the traditional tools that such cities as Los Angeles and New Orleans have used to help residents escape past heat waves, such as cooling centers, won’t be able to operate as usual due to the need for social distancing and stay-at-home orders still in place in many parts of the country.

“What’s particularly insidious is that because Covid is a respiratory illness, it means people affected by it are all the more vulnerable when there is a heat wave,” said Basav Sen, climate justice project director at the Institute for Policy Studies, a liberal think tank in Washington, D.C.

Increased heat and humidity can make it harder for people to breathe, especially those with asthma or chronic obstructive pulmonary disease. A heat wave could be more deadly for someone who has Covid-19 and is experiencing symptoms like severe coughing or shortness of breath. 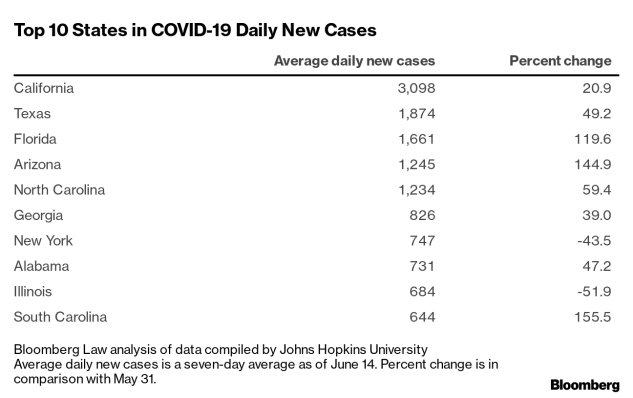 Further worrying health officials, new infections of the virus have spiked in recent weeks in more than half the states (see chart), with California, Texas, Florida, Arizona, and North Carolina reporting at least a thousand new cases daily on average over the past week, according to the most current data.

All of those states have at least a 50% chance of experiencing hotter temperatures this summer than usual (see map below).

Covid Cases Rising With The Temperatures

Trump first optimistically mentioned the potential for heat to mitigate the virus’s spread in February. “There’s a theory that, in April, when it gets warm—historically, that has been able to kill the virus. So we don’t know yet; we’re not sure yet. But that’s around the corner,” he said then.

The Centers for Disease Control and Prevention website says it’s not yet known whether weather and temperature affect the spread of the virus. But countries with warmer climates, such as India and Brazil, have seen recent flare-ups of the virus.

Jean Su, energy justice program director and staff attorney at the Center for Biological Diversity, said that the pandemic, though worsening conditions for many, is also revealing what already happens to the most vulnerable every year. Her organization is pushing for a nationwide moratorium on utility shutoffs, bill forgiveness for people with low incomes, and a grace period after the emergency has ended.

“What we need is federal action to say no families will be left behind in this crisis,” she said. 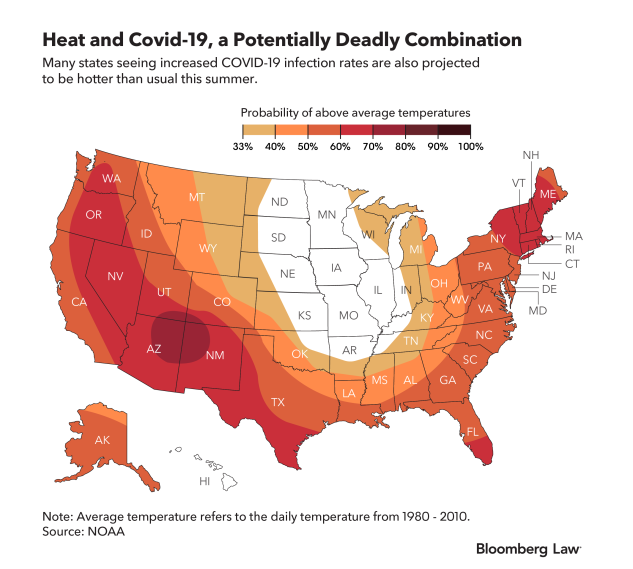 Heat-related illnesses are largely preventable, yet more than 600 people die from extreme heat each year, according to the CDC. Those most at risk include adults age 65 and older, minorities, people with lower incomes, and those with chronic illnesses—the same populations most vulnerable to the virus.

A study of 50 large U.S. cities conducted in 2014 by researchers at the Georgia Institute of Technology and University of Wisconsin, Madison found that the intensity and length of heat waves is increasing, and the heat wave season is expanding. In the Dallas-Fort Worth area of Texas, heat waves lasted an average 3.5 days longer in the 2000s than they did in the 1960s, according to the study.

Dana Habeeb, an assistant professor at Indiana University in Bloomington, Ind., one of the study’s authors, said that temperatures are only continuing to increase due to climate change.

“It’s something we don’t think about, how vulnerable we are to extreme heat,” she said.

In Los Angeles, when temperatures soared into the upper 90s in late April, about 70 people used cooling centers over a two-day period. People who visited the centers were screened for the virus and given masks, gloves, hand sanitizer, and wipes if they didn’t have them, said Aram Sahakian, general manager of the city’s emergency management department.

Once inside, people were instructed to stay at least six feet from everyone else, and a safety officer was present to remind others of social distancing guidelines, he said.

And if someone failed the test?

Sahakian said they are exploring whether to turn them away or whether to call the hospital.

“We’re discussing it with county health, but it depends on the condition of the person,” he said. “It’s all dependent on the symptoms.”

Utilities Second Only to Rent

Rather than relying on cooling centers, which may not be viable given social distancing rules, ensuring that people have access to electricity could be one of the most effective ways of protecting them against summer heat during the pandemic. However, utility bills can be one of the biggest household expenses next to rent, according to Sonal Jessel, policy and advocacy coordinator for WE ACT for Environmental Justice, which has offices in New York and Washington.

Jessel said that one of her group’s members reported having electricity bills as high as $300 a month.

“People are worried about paying their energy bills,” she said. “And worried about summer heat and how they can stay safe at home and not turn to public sources of relief.”

Some states established a moratorium on utility disconnections, and some cities have launched various utility relief measures in response to high unemployment rates.

City council members in Austin, Texas, approved a $46 million utility bill relief package in April. To date, more than 3,200 customers have received assistance toward their utility bills, totaling nearly $897,000, according to a city spokeswoman.

The city also leased hotels to provide shelter to homeless people amid the pandemic, which is why Chris Crookham, Austin’s public health emergency preparedness manager, believes there may be less of a need for cooling centers this year.

As the pandemic continues, Renee Salas cited an increased need for both community resilience and action. Salas is an assistant professor of emergency medicine at Harvard Medical School and emergency medicine physician at Massachusetts General Hospital.

Similar to how Chicago implemented a door-knocking campaign after the city experienced deadly heat waves in the 1990s, cities can establish initiatives to identify their most at-risk residents and develop plans to reach out to them, she said.

There are other ways to help keep communities cool outside of air conditioning, according to Salas, including urban green spacing and increased insulation to help keep cool air from escaping homes.

“I’m hopeful this will spur the urgent innovation that’s needed to tackle not only the pandemic but the climate crisis and larger systemic issues,” Salas said.

(Updates with additional commentary and new title for Salas in final four paragraphs.)