Sugar beet pulp is spun in centrifuges to separate it into brown molasses and crystalized sugar, making the sugar white, at the Michigan Sugar Co. plant in Bay City, Mich., on Oct. 24, 2011.
Photographer: Adam Bird/Bloomberg via Getty Images

The innocuous sugar beets that provide more than half of America’s sugar are also quietly one of the West’s largest polluters.

Sugar beet factories—known for their “rotten egg” odor—can rank as highly as other major industrial polluters such as refining, mining, and chemical manufacturing.

The nine sugar beet farmer-owned cooperatives in the U.S. have drawn repeated scrutiny from state and federal agencies over the last decade for frequently violating air, waste, water, and safety regulations, according to a Bloomberg Environment analysis.

There are only 22 sugar beet factories in U.S. compared with more than 130 oil refineries, almost 700 coal mines, hundreds of power plants and cement kilns, and thousands of chemical manufacturing facilities. Three Western Sugar Cooperative facilities, however, landed among the top 20 polluters in a recent report released by two environmental groups.

“I don’t think you show up on our list that many times without having a culture that allows excesses,” said Skye Borden, state director of Environment Montana, whose group and the Frontier Group released the report. 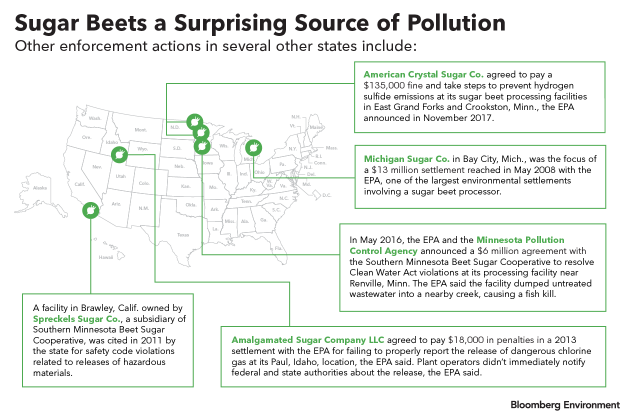 Pollutants were being spewed as much as five times their permitted limits for almost two-thirds of those instances, Garner-Wells said. “They’re far and away one of the biggest water polluters in the state of Colorado.”

A recent settlement with the factory required the company to overhaul its water and waste management processes, and included a $2 million fine for water violations—the largest penalty ever brought under the state’s Water Quality Control Act.

Western Sugar is working to ensure compliance with state and federal environmental laws in the four states where it operates, Heather K. Luther, vice president and general counsel to the company, told Bloomberg Environment.

The cooperative is negotiating with Fort Morgan to allow it to treat its wastewater at the city’s treatment facility, and is working with Barr Engineering, a Minneapolis-based engineering and environmental consultant, on the project, Morgan said. The lead for the project declined to speak with Bloomberg Environment.

Western Sugar’s facility in Billings, Mont., exceeded its permit limit for releases into the Yellowstone River 56 times during a 21-month period, Borden said.

“That amount of bacterial pollution is horrifying,” Borden said. “It creates extremely unsafe conditions for anyone in or near the waterway.”

WildEarth Guardians sued Western Sugar in May 2014 in a now-dismissed case over alleged Clean Water Act violations at its Fort Morgan processing plant.

“Many of these rural communities are built around the sugar beet industry, so there’s some sensitivity about them,” Pelz said. “If a coal-fired plant is the only employer for a whole community, people tend to ignore environmental problems. They feel like they have no other choice.”

Pelz noted that all 22 sugar beet processing plants are wholly owned by farmers. “Nobody wants to speak out against or enforce against their neighbors,” she said. If plants close, “farmers may have no place to process their beets.”

There are solutions and measures for the industry to adopt to be cleaner, she said. “There’s a place for environmental groups top step up and say, there’s a problem we have to recognize here. Is there a way to do this that’s clean and affordable?”

To contact the reporter on this story: Tripp Baltz in Denver at abaltz@bloomberglaw.com