A landmark law in California to reduce air pollution in disadvantaged areas isn’t meeting deadlines and has been hampered by dwindling funding and community distrust, advocates and air regulators say.

Some community advocates also cite a legacy of systemic racism with the first-in-the-nation legislation, which then-Gov. Jerry Brown signed in 2017 as part of an overall package to extend his cap-and-trade program. That program limits emissions, and requires certain polluters to buy credits when going over those thresholds.

AB 617 required the California Air Resources Board to create a community air protection program, with more localized air monitoring and targeted reductions in emissions based on the data.

“I think, like anything, we’re trying to change the culture of the local air districts and the state, and that’s going to be painful,” said Assemblymember Cristina Garcia (D), the bill’s author. “We’re trying to develop something that we don’t have a model for.”

Since the program began, the state has set aside $50 million annually for air districts to implement AB 617. But the annual costs are closer to double that amount, leaving air districts carrying the rest or trying to do more with existing staff, said Tung Le, executive director of the California Air Pollution Control Officers Association.

“AB 617 is something that could make a significant difference for these communities,” he said. “The biggest challenge is funding it continuously and sufficiently.”

But residents who have lived in the communities and watched loved ones or neighbors suffer want action now.

“They’ve already identified the air quality as horrible,” said LaDonna Williams, programs director for All Positives Possible, a Bay Area-based nonprofit focused on environmental justice. “They’re studying us to death. How about getting us some reductions to save lives?”

“Communities like mine get treated like a wasteland, we get treated like we’re disposable,” said Garcia, whose district covers southeastern Los Angeles County. “At the local level, I wanted to make sure we were being intentional on clean air.”

The air resources board approved a blueprint for how the program should work in September 2018, and chose the first 10 communities to participate. Three more were added in 2019. Those communities were meant to serve as a model for future efforts in other areas burdened with poor air quality and associated impacts, like increased asthma rates and hospital admissions. 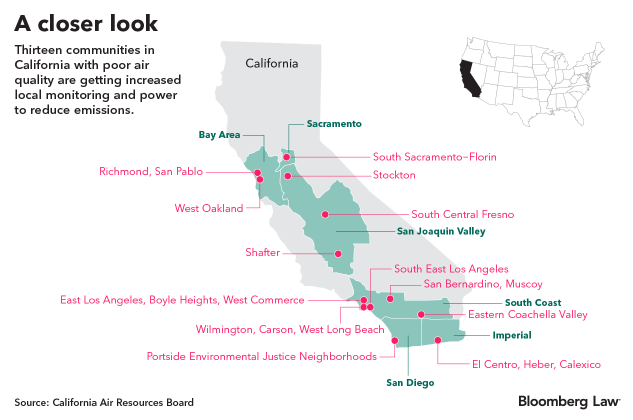 The bill deadlines are aggressive. Within a year of selection, the local air board in each community is expected to create a steering group of local residents, workers, or representatives of groups serving the area.

A community air monitoring plan and an emissions reduction program are also required within that year.

Seven communities have approved emissions reduction programs, but none have met all the requirements within a year.

“The deadlines are what the legislature wrote,” said Dr. John Balmes, an air board member who chairs a consultation group about how to further develop AB 617. “There was no basis to the deadlines.”

“It’s a transformational law, potentially, if implemented successfully,” he added.

Local air boards saw the bill as an unfunded mandate and a new burden since the districts worked to regulate polluters—not work with those who lived or worked near refineries, cement plants, warehouses, and other emitters, Balmes said.

Many of these air districts were unprepared for a community-centered engagement, said Margaret Gordon, a member of the consultation group and co-founder and co-director of the West Oakland Environmental Indicators Project.

“They didn’t have the staff, the relationships, or the trust,” Gordon said.

In December, West Oakland was the first community to submit and have an emissions reduction plan approved by the state. Much of that came from previous work and relationships already in place as part of prior agreements with the Environmental Protection Agency and the Bay Area Air Quality Management District.

An emission reduction plan in Imperial County, by the Mexican border, was approved in January, with two communities in the San Joaquin Valley approved in February. Three others in Southern California, including Southeast Los Angeles, were approved this month.

Three districts, including the Sacramento Metropolitan Air Quality Management District, have opted for air monitoring only for now.

“It’s actually taking more time and resources than we considered,” said Alberto Ayala, the Sacramento district’s executive director. “We fully understand and agree that doing monitoring for the sake of monitoring doesn’t really get to solutions.”

Sacramento’s delay, he said, has to do with two things: difficulty accumulating enough data to make meaningful reductions, and a lack of money from the state.

“Unfortunately, that fear is playing out as we speak,” he said.

Money for the overall program has fallen and is uncertain for next year as the state budget had to factor in a $54 billion deficit brought on by the coronavirus.

The state budget included $250 million total for the program in the fiscal 2017-18 budget, and $245 million the following two years. But the 2019-2020 number was cut to $209 million because of reduced cap-and-trade auction results stemming from work closures related to Covid-19, and polluters not needing to buy credits.

The governor proposed $200 million during the budget process, but that amount wasn’t acted upon before the legislative session ended last month and an appropriation is “still not determined,” according to Radhika Majhail, manager of the incentives oversight section at the state air resources board.

The only committed funding right now for fiscal 2020-2021 is $50 million for local air districts to administer the program—and that money came from an air pollution control fund.

The governor’s office didn’t immediately respond to a request for comment.

Williams, from All Positives Possible, and another woman also said the program wasn’t working for the Black community, according to their remarks at a California Air Resources Board meeting in July.

“The air district has done everything possible to silence those asking for real change,” said Denise McCoy, who was a member of the steering committee in Sacramento but removed earlier this year.

McCoy said the air district had removed three African-American women from the committee, prompting chair Mary Nichols to ask staff to look into allegations of racism.

Sacramento County Board of Supervisors Chairman Phil Serna, who is on both the state and Sacramento air boards, said the complaint was unsubstantiated. McCoy was removed because the community group she represented withdrew from participating in the steering committee, making her ineligible, he said.

McCoy disputes that she wasn’t eligible because, despite the community group withdrawing, she works as a real estate agent selling homes in the area, a fact that would make her eligible to serve and that she included that in her application. She said the district sought to remove her because she advocated for more monitoring and wanted emission reductions to be part of the plan.

“They’re going after voices of dissent,” McCoy said. “They’re not doing anything that’s actually going to clean the air in any reasonable amount of time.”

During that same July meeting, Nichols also charged Serna with drafting an anti-racism resolution to bring before the board, which will happen in October.

Serna said the resolution will be a living document that clearly outlines expectations that the state and local boards do everything they can to address institutional racism. “This is really the beginning,” Serna said. “This is not going to be one and done.”

An equity task force has also been formed, and the air board is working on hiring a new assistant executive officer for environmental justice.

“I think we are making pretty good progress,” Stanley Young, spokesman for the California Air Resources Board, said about the program. “We understand there is a great need for this and that would, frankly, require more resources and staff.”

Garcia, the Assemblymember, said there have been positive changes related to the program. She pointed to San Joaquin Valley communities: Shafter will get ambient air monitoring for pesticides, long a concern for residents.

And the plan for South Central Fresno should result in reducing fine particulate matter by 278 tons and nitrogen oxides by 1,662 tons.

Balmes and the consultation group are also working on updating program guidelines. They got stipends approved through the end of the year so steering committee members could afford transportation, child care, or other things that could impede participation.

Garcia said she is disappointed that some communities are only doing monitoring, and that community boundaries are hard to define or alter once set.

Air boards don’t have jurisdiction over land use, so the placement of warehouses or other polluting facilities can happen outside the realm of the program. Land use authority is a tweak the legislature may need to examine, she and others said.

“For me, this was always just the first step,” Garcia said. “This was never going to be like an ‘end-all be-all’ that fixes everything. I was like, ‘How do I open the door?’”

Richmond, in the Bay Area, is one of the communities monitoring air. Work on an emissions reduction program will come next year, said Veronica Eady, deputy executive officer for the Bay Area Air Quality Management District.

“There’s an urgency, but it also takes time to get these things in place,” Eady said, and understand what’s happening in the communities.

That’s too long for Williams of Richmond.

“I’m in a refinery town,” she said. “I know my air is bad. I’ve buried loved ones, watched them take the last breath. That puts an urgency on me to get to the reduction point. We’re just going to monitor our air and waste our time.”

Expectations have been challenging to address, Balmes and others said, because AB 617 focuses only on air pollution—not crime, poverty, land use, and other factors that make an area disadvantaged.

“They want to address the injustices that they have experienced for decades but air pollution is just one piece of a much bigger puzzle,” Balmes said. “People are sort of loading too much on the implementation of a bill that really has a focus on air pollution.”

(Updates Sept. 23 story to include comment from Denise McCoy.)