States across the country are plowing ahead with their own low- and zero-emission vehicle mandates, putting the squeeze on tailpipe greenhouse gas emissions while national car regulations remain in flux at the White House.

Minnesota, New Mexico, and Nevada are working to implement clean car standards on the local level in line with California’s more-stringent tailpipe emission and electric vehicle requirements. A Trump-rescinded waiver allows the Golden State to set its own rules to mitigate pollution from heavy traffic.

These state-by-state car efforts come despite uncertainty about where national standards are heading, though EPA Administrator Michael Regan made it clear this week that national carbon standards for cars is top of the list.

Proposed rulemaking on national standards is expected by July, according to Biden’s executive order on environmental rules. A decision on California’s waiver is due next month.

The state trio is on track to join Virginia, which last week became the latest state to adopt more-stringent California tailpipe emission and electric vehicle standards after Gov. Ralph Northam (D) signed an advanced clean cars bill into law. The mandate puts a cap on carbon emissions for cars with internal combustion engines and aims to jump-start electric vehicle sales.

The move is a welcome one for Don Hall, president of the Virginia Automobile Dealers Association, who told Bloomberg Law that there’s a hunger for EVs in his state, but distribution is lagging. The dealers’ support of the bill was “unprecedented,” he said.

“Better to get on that electric train and be a part of the future than to dig our heels in and say no, no, no, people don’t want these cars,” Hall said. 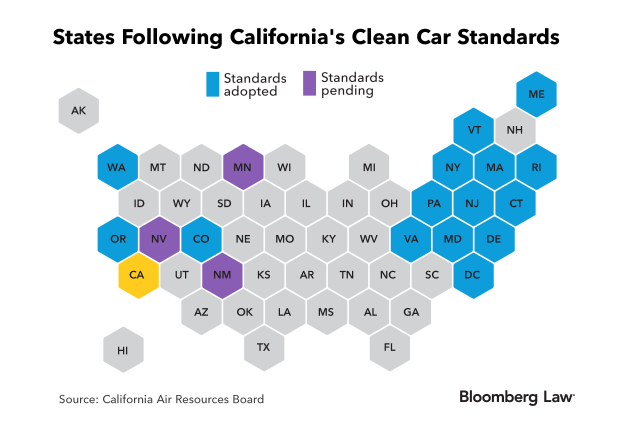 Fourteen states and the District of Columbia have now adopted California’s low-emission clean car standards—set by the California Air Resources Board, or CARB—thanks to a historic waiver granted under the Clean Air Act. Twelve of those states also have adopted zero-emission vehicle standards.

That arrangement was thrown into uncertainty when the Trump administration rescinded California’s waiver within a rollback of the Obama-era tailpipe emission standards in 2019. The rollback prompted immediate litigation.

President Joe Biden has promised to review the pared-down car rules, and litigation at the U.S Court of Appeals for the District of Columbia Circuit over California’s waiver was paused last month in anticipation of moves from the new White House.

That idea is highlighted by a Rhodium Group analysis of two other California car deals—one with automakers and one with states to ramp up heavy-duty vehicle electrification—which found that expanding those programs nationally could slash annual U.S. carbon output by more than 2 billion metric tons between 2021 and 2045.

The Minnesota Pollution Control Agency is at the helm of that state’s tailpipe emissions push that launched in September 2019. The state is forging ahead with car rules parallel to Biden’s deliberation on national standards, said Craig McDonnell, the agency’s assistant commissioner for air and climate policy.

“State actions and automaker investments and decisions are driving positive progress on reducing greenhouse gas emissions and striving for a better climate,” McDonnell said in a statement.

The rulemaking’s public comment period ended Monday, and now a state administrative law judge will issue a report in the coming weeks on whether the agency can adopt the rule. Under the federal Clean Air Act—and if Biden restores the California waiver—there would be a two-year grace period for implementation after it’s finalized.

Nevada is currently in technical information sessions on its standards, with rulemaking projected to wrap up by the end of the year.

Groups see Biden’s push for vehicle electrification and manufacturer promises—like commitment to scrap gas-powered cars by 2035—as boons for the state-by-state desire for California’s standards.

“Because of what’s happening with the automaker announcements—and that’s being driven by the global demand for EVs and other global policy efforts, too—I think we’re going to see more activity at the state level in terms of adoption,” said Katherine Stainken, senior policy director at Plug In America, a nonprofit advocating plug-in vehicles.

“If anything, national standards would rise up to the level of the state standards, rather than impacting them,” said Morgan Folger, director of clean car communities at Environment America.

California Democratic Sens. Dianne Feinstein and Alex Padilla last week also wrote to Biden and the Environmental Protection Agency, urging the administration give back California’s waiver and “maintain states’ authority to set vehicle emissions standards necessary to protect the health and welfare of their people.”

Even in the event that Biden hikes the national standards above Trump’s, Folger said the decision to go with CARB’s rules comes with perks, like greater involvement in what standards should look like.

Efforts to beef up efficiency standards have, in the past, been met with resistance from groups and manufactures who see variance in national and state standards as fuel for exacerbating regulatory uncertainty.

The Alliance for Automotive Innovation, representing makers like GM and, eventually adopted a neutral stance on the rule.

Auto manufacturers “will have another opportunity to show themselves to be good partners in other states soon,” Shepherd said.

Critics to Minnesota’s rulemaking made their voices heard in public comments that concluded this week. They included the Minnesota Farm Bureau, who said that Biden’s new rules and litigation over California’s rescinded waiver “create uncertainty in Minnesota.”

In the same comments, the Alliance for Automotive Innovation said Minnesota’s proposed rule doesn’t meet rulemaking standards, and that the proposal is “not identical to the California program and places undue burden on the industry.”

The trade group directed Bloomberg Law to a statement earlier this year that said Biden ought to consider “a revised national program that includes California, brings all automakers under a unified set of common requirements and ensures a level, competitive playing field.”

One way to ensure regulatory certainty is to craft stricter standards that California can be happy with as well, said Carol Lee Rawn, senior director for transportation at sustainable investment nonprofit Ceres.

The momentum for stricter rules on the transportation industry and electrification has been climbing recently, but “without standards in place, there’s no assurance that those are going to go beyond aspirations or goals,” Rawn noted.

“It is much more predictable if we know exactly what the standards are, how they apply, and that everybody operates on the same set of standards, whether it’s manufacturing, whether it’s selling, or whether it’s owning one,” he said.

Asked whether the state and industry conversation around cleaner car adoption has changed considerably even in the last couple of years, he answered, “Damn straight it has.”