Two people use a neighborhood street as a boat ramp in floodwaters from the Waccamaw River caused by Hurricane Florence on Sept. 26, 2018, in Bucksport, S.C. The national flood insurance program is set to lapse Nov. 30 unless Congress acts.
Photographer: Sean Rayford/Getty Images

The financially imperiled federal flood insurance program is days away from expiring, but the insurance industry and other advocates said they hold out little hope that Congress will solve the program’s problems anytime soon.

Congress has until Nov. 30 to extend the program and avoid a lapse that could destabilize real estate markets in coastal states, marking the seventh time in the last 12 months that the program has risked lapsing.

Coastal lawmakers have been at odds with fiscal conservatives over the program that for more than a decade has failed the original goal of covering its own costs.

The National Flood Insurance Program brought in approximately $1.4 billion less in premiums than it paid out in claims in the 2017 fiscal year, according to the Congressional Budget Office.

The chances of a breakthrough before the deadline between these two congressional factions is slim to none, with Democrats knowing they will be in a better negotiating position next year, Michael Barry, head of public affairs with the Insurance Information Institute, said.

“The issues remain the same,” he told Bloomberg Environment. “It’s very difficult politically to do anything.” 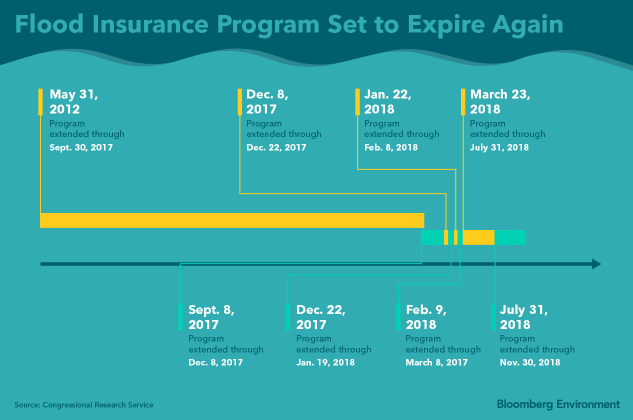 ‘This Was Our Shot’

After the Nov. 6 midterm elections, it may be impossible for conservatives to get anything close to what they want from a flood insurance bill.

Rep. Jeb Hensarling (R-Texas), a fiscal hawk in the House, is the chairman of the House Financial Services Committee. He was instrumental in drafting a bill (H.R. 2874) that would overhaul the flood insurance program and limit coverage for some properties that have repeatedly flooded.

Although Hensarling was able to get this bill passed by the House, it never even got a hearing in the Senate, with coastal senators from both parties balking at the higher premiums their constituents might have had to pay.

Now Hensarling is leaving not only the chairmanship of his committee but Congress altogether, as he retires after 16 years in the House. He will likely be replaced as committee chairman by Rep. Maxine Waters (D-Calif.).

Waters’ office didn’t respond to Bloomberg Environment’s request for comment. She previously said that “affordability is my top priority” and criticized the Hensarling bill for potentially causing premiums to skyrocket.

Waters’ impending chairmanship probably closes the window on the fiscal hawks’ ability to rein in the program, R.J. Lehmann, a senior fellow and director of finance, insurance and trade policy at the libertarian think tank R Street Institute, said.

“This was our shot,” he told Bloomberg Environment. “And I think it may be lost for the foreseeable future to get reform done.”

So where does this leave the insurance industry? Companies like Allstate Corp., the Hartford Financial Services Group Inc., and others partner with the Federal Emergency Management Agency to administer some of the program’s policies.

The constant threat of a lapse makes life harder for those companies, Nat Wienecke, senior vice president for federal government relations with the Property Casualty Insurers Association of America, said.

Beyond that, he said, even a short-term lapse can wreak havoc on certain real estate markets, because many mortgage lenders in coastal areas require homebuyers to purchase a flood policy before they will finalize a loan.

“The fuse is lit, and Congress doesn’t have a lot of time to sort this out,” Wienecke told Bloomberg Environment.

He said he’s worried that a short-term lapse of a few days could happen this time: Congress may decide it will be legislatively easier to attach an extension of the flood insurance program to a larger federal government funding bill, which must pass by Dec. 7 to avoid a partial government shutdown.

Sen. John Kennedy (R-La.), one of the lawmakers opposed to the Hensarling bill, introduced a measure (S. 3628) that would extend the flood insurance program for six months, through the end of May.

That would give Waters and other Democratic leaders in the House enough time to get staff in place and work up a new bill, Caitlin Berni, a spokeswoman with the Coalition for Sustainable Flood Insurance, said. The coalition consists of local business groups and municipalities that want flood insurance premiums to remain affordable.

The coalition’s leader, Michael Hecht, said he acknowledges that the program is in financial trouble and needs changes. But he said there are some lawmakers, Hensarling in particular, who believe the program shouldn’t even exist. That’s why Hecht, who also runs Greater New Orleans Inc., a regional development group, said the changing of the guard on Capitol Hill gives him optimism that Congress will find a solution in the coming year.

“Hensarling was philosophically opposed to flood insurance,” Hecht told Bloomberg Environment. “It was not a personality issue but an ideological one. We were never going to be able to cross that financial divide as long as he was running Financial Services.”