The Senate will consider, as soon as next week, whether to kill a Trump administration methane-emissions rule, in what would be the first time this Congress that the full upper chamber deliberates using its power to overturn regulations.

The Congressional Review Act allows Congress to repeal regulations issued during the waning days of a previous administration. Senate Majority Leader (D-N.Y.) discussed using the CRA to roll back the methane rule during a caucus meeting Tuesday, according to a Senate Democratic source who attended the gathering.

The regulation ends limits on methane emissions from new oil and gas wells while removing additional curbs on leaks of smog-causing volatile organic compounds from gas transmission and storage equipment.

Congressional Review Act legislation can’t be filibustered in the Senate. Success typically requires one-party control of both chambers of Congress and the White House, as happened when Trump took office in 2017. That year, President and Republican legislators used the law to repeal more than a dozen Obama-era regulations.

Democrats are being selective in using the law this Congress. The deadline to introduce resolutions to use the CRA on rules finalized near the end of Trump’s term was in early April, regulatory scholars estimate. 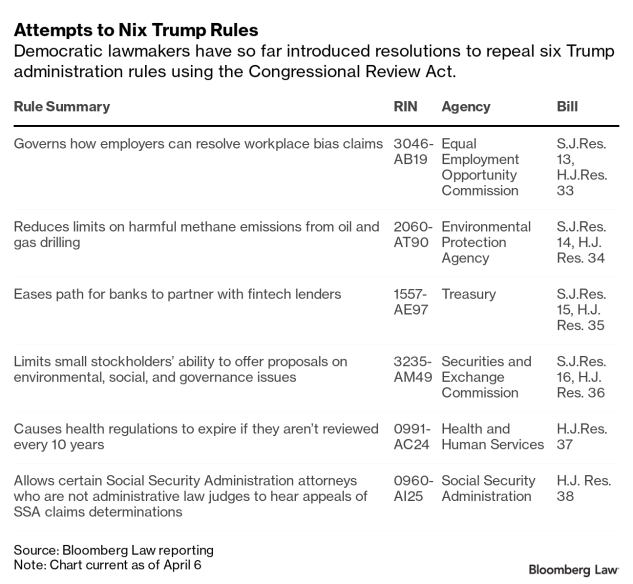 With assistance from Nancy Ognanovich

To contact the reporters on this story: in Washington at crozen@bgov.com

To contact the editors responsible for this story: at mmali@bloombergindustry.com; at bkohn@bloomberglaw.com