Solar panels set up by Tesla Industries are seen at a hospital in Vieques, Puerto Rico.
Photographer: Ricardo Arduengo/AFP/Getty Images

Rooftop solar and battery systems are hot in Puerto Rico: 10,000 new systems have been installed in the year since Hurricane Maria hit the island, and some battery suppliers such as Tesla Inc. are having trouble keeping up.

The 10,000 residential solar plus battery storage systems were installed between September 2017 and September 2018, P.J. Wilson, president of the Solar and Energy Storage Association of Puerto Rico, which represents the territory’s solar and battery industries, told Bloomberg Environment.

This number rivals the 12,000 existing residential solar systems on the island before the storm hit, but virtually none of the systems were paired with batteries. Now, all of the major Puerto Rican installers are selling combined solar and battery systems, not just solar.

Why? Energy security and resiliency. 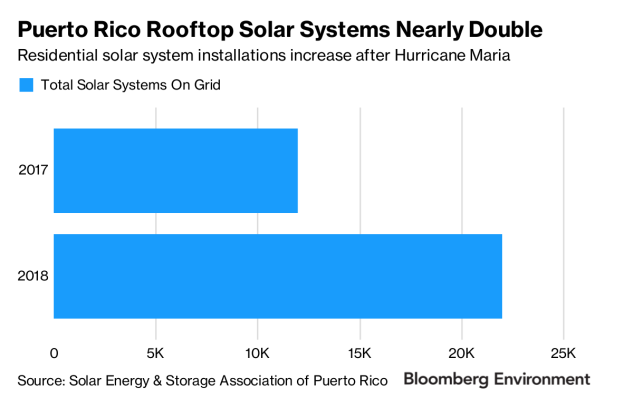 The Category 4 hurricane, which made landfall Sept. 20, 2017, wiped out the island’s fragile electricity system, taking nearly 11 months for the Puerto Rico Electric Power Authority (PREPA) to return power to all of its residential customers.

“Before the storm, it was basically a savings play,” Alejandro Uriarte, CEO of New Energy, a solar and battery installer, told Bloomberg Environment, explaining residents’ previous rationale for buying rooftop solar. “People looking to save on their bills were the ones buying solar, but now saving is not as important as resiliency and being able to have power.”

The island also has attracted new U.S. mainland businesses. Sunrun Inc. entered the island with its Brightbox system in June, and is partnering with local installers. Sunrun has said the Brightbox package can provide more than 10 hours of backup power.

“Puerto Rico has also had a great market for back-up generators,” Javier Rua-Jovet, Sunrun’s director of public policy, told Bloomberg Environment. “The solar and battery proposition is a way for Puerto Ricans to have a generator that’s noiseless and environmentally sound. It’s the natural and self-evident course for Puerto Rico.”

Also, Sunnova, which had the largest residential solar customer base on the island before the storm, about 10,000 customers, continues to grow as it offers only solar plus battery options.

“Cost effectiveness of solar plus battery will continue to come down over time, relative to prices of electricity rates on the island,” Julia Hamm, president of the Smart Electric Power Alliance and a member of Transformational Advisory Council to PREPA, told Bloomberg Environment.

Currently, around 3 percent of the island’s electricity comes from renewables and 1 percent from hydropower, with the rest coming from fossil fuels—45 percent from petroleum, 34 percent from natural gas, and 17 percent from coal, according to PREPA.

But the utility wants to change that. CEO Jose Ortiz has said he wants the island to go to 40 percent renewables within the next five years. The remainder will probably be natural gas, petroleum, and coal.

Padilla acknowledged customers’ greater demand for solar and battery power after the storm, saying they want to become independent from the utility.

“It’s going to be two-way relationship and we also want to serve the customer as their backup,” he said.

Tesla has been donating and selling its Powerwall batteries since the storm, but it is having trouble keeping up with demand from new orders

Tesla’s sales have been backlogged due to the battery giant being behind on production. Windmar reported a three-month backlog in Tesla batteries, while Maximo Solar reported delays of up to six months.

“Ramping up the availability of batteries has been an issue. That’s starting to loosen up, given the priority from a humanitarian and citizenship perspective,” Sunnova CEO John Berger told Bloomberg Environment.

Tesla acknowledged the production delays but said it is shipping a large amount of units within the next few weeks to the island to help meet demand in Puerto Rico, a Tesla spokesperson told Bloomberg Environment.

Tesla also recently raised the price for Powerwall being sold by Puerto Rican installers to standardize the price for the system across its markets from $5,100 to $5,400.