Maine Sen. Susan Collins touts herself as the only Republican to vote against both of President Donald Trump’s picks to head the EPA.

Colorado Sen. Cory Gardner brushed aside the president’s request for deep cuts for the Energy Department’s renewable energy initiatives and attempt to zero out next-generation energy research by ARPA-E.

Arizona Sen. Martha McSally, though a new arrival to the Senate, sided with Democrats in several high-profile showdowns over climate change as a House member, including a vote to scrap requirements that the Pentagon assess its vulnerability to rising sea level and other climate impacts.

The three, considered the most vulnerable Senate Republicans seeking re-election in 2020, have distanced themselves from Trump and some Republican colleagues who question whether climate change is real or whether humans are contributing to it.

Of the three, only Collins has an above-average green voting record and has backed significant climate bills. The three are so far betting they either are green enough to withstand tough races or don’t see climate change and environmental issues as deciding factors in an election that’s increasingly becoming a referendum on Trump.

Whether they are right could help decide the Senate majority in 2021. Republicans hold a 53-47 seat majority in the chamber.

All three races are considered toss-ups by some political analysts, including the Cook Political Report. Others, like Sabato’s Crystal Ball, consider Collins, first elected in 1996, slightly favored in Maine. Trump lost Maine and Colorado in 2016.

McSally’s race is the hardest to gauge, but Gardner is clearly the most vulnerable of the three, Duffy said. “Trump has no hope of winning Colorado, and Gardner is swimming against the tide,” she said.

The three Republicans aren’t likely to face tough votes on significant climate legislation before the election, given Senate Republican leadership’s opposition. Some modest bills might give them a chance to polish their green credentials—a bipartisan energy efficiency package and a battery storage bill among them.

Of the three senators, only Maine’s Collins can claim to having something close to a pro-environment voting record, according to environmental groups—her 61% lifetime score by the League of Conservation Voters makes her easily the greenest Republican in the Senate, where the average 2018 ranking was 51%.

Her score fell precipitously in 2018 to 21%. The group docked her for votes to confirm nominees opposed by environmental groups, including Secretary of State Mike Pompeo and NASA Administrator Jim Bridenstine.

LCV scores Gardner just a 10% lifetime green rating. It hasn’t yet rated McSally’s Senate record, but as a House member, her lifetime rating trailed Gardner’s at 6%.

Gardner and McSally both voted to confirm EPA Administrator Andrew Wheeler in February and Secretary of Interior David Bernhardt in April. Collins was more willing to break with the president’s appointees, voting against Wheeler and his predecessor, Scott Pruitt, although she voted for Bernhardt.

Some Republicans argue LCV’s ratings are too expansive a gauge of congressional voting records, because they also consider votes to confirm judges, secretary of state nominations, and immigration. 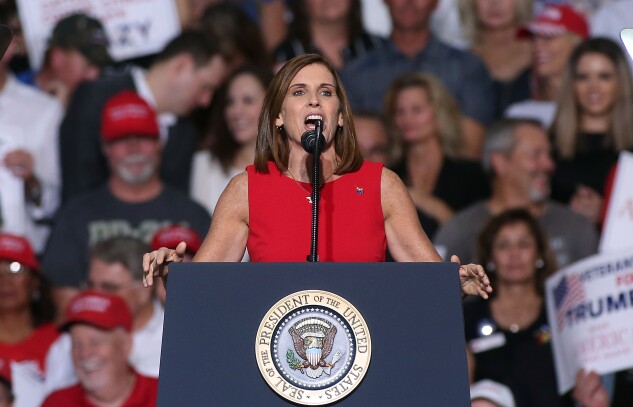 The three in many cases have tried to downplay climate change as a pivotal issue in the 2020 election, even while highlighting their green credentials.

Collins points to her votes defending Obama’s Clean Power Plan and methane rules from Republican-led attacks and her legislation to curb “super pollutants"—powerful greenhouse gases such as hydrofluorocarbons, methane, and black carbon.

“It’s an important issue to me, and has been” for over a decade, said Collins, who bristled when asked how important climate has been in the campaign. “I don’t think of it as a political issue,” she said.

“I have a very long and very strong record in this area, so this is not something new for me,” she said, noting her work with Sen. Maria Cantwell (D-Wash.) nearly a decade ago on a streamlined alternative to Democrats’ failed cap-and-trade climate legislation.

McSally typically mentions climate change in broad terms, usually in the context of Arizona’s water shortages. “We do have to address the issues of climate, and water is so important for Arizona,” she said at an October 2018 campaign debate, before changing the subject to veterans’ issues. McSally lost that race to Sen. Kyrsten Sinema (D) but was appointed in early 2019 to fill a vacancy.

Gardner, still in his first term, has touted his backing of clean energy and conservation, and his acceptance of the “consensus within the scientific community” on climate change. But he also has voted against Senate resolutions that say humans are largely responsible for warming the planet—which is the scientific consensus.

Gardner has taken some heat on his climate stance in public forums in Colorado, including an Aug. 13 Vail meeting, where he was pressed on his climate positions.

Some say Gardner’s voting record doesn’t fit a state where Democrats have won the last three presidential elections. Gardner has voted with his party 95 percent of the time, according to Bloomberg Government data.

Gardner points to his work with Democrats on battery storage and renewable energy incentives and research, and that he was a leading Republican in making federal conservation funding permanent.

“I am a pro-clean energy, pro-environment, pro-conservation Republican,” he said. “And in fact, I think it makes perfect sense” for Colorado.

Maine’s Collins argues that she and other like-minded Republicans need to tout their green credentials.

“We need to get that message out, there’s no doubt that younger voters are very concerned, regardless of their party, about the environment and about climate change, and we need to have an agenda that responds to those concerns,” she said.

In an interview, McSally said climate change hasn’t been a top issue for voters in her state.

“It has not come up once in my seven months” in the Senate, she said, “including an extensive 15-county tour that I’ve taken” to get feedback from voters. “I heard a lot of diverse views on a lot of different issues,” she said, and climate issues “literally did not come up once.”

—With assistance from Tiffany Stecker.

To contact the reporter on this story: in Washington at dscott@bloombergenvironment.com