The coronavirus lockdown will cause the biggest drop in energy demand in history, with only renewables managing to increase output through the crisis.

As people around the world consume less oil, gas and coal, electricity generated from the wind and sun will keep flowing, resulting in an unprecedented 8% decline in global carbon dioxide emissions this year, according to a report from the International Energy Agency.

“The energy industry that emerges from this crisis will be significantly different from the one that came before,” Fatih Birol, the IEA’s executive director, said in a statement released from the organization’s headquarters in Paris on Thursday.

The pandemic has infected at least 3 million people worldwide and killed more than 200,000 people as of April 29. With Covid-19 and a vaccine not expected until at least the end of the year, reducing the interactions between infected people is the only effective way to control the spread.

Those measures, however, have severe impact on economic growth and energy demand. Each month of lockdown on the scale of what’s in place this month reduces annual energy demand by 1.5%, IEA estimates. 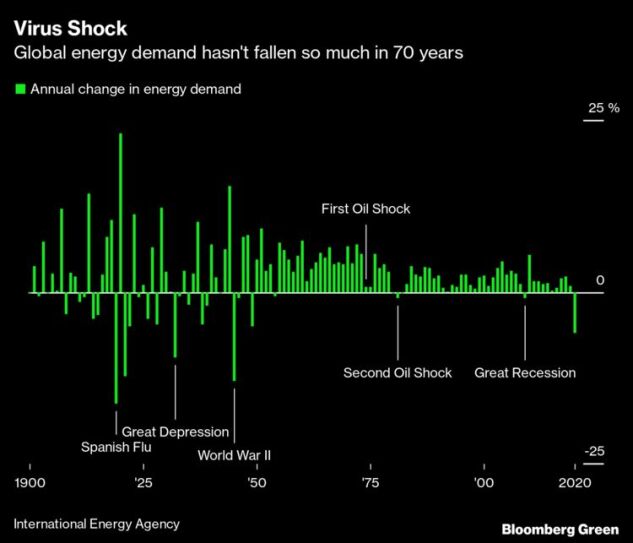 The institution that advises nations on energy policy says that demand is likely to fall 6% in 2020, which is seven times the scale of the drop suffered in the 2008 financial crisis. In absolute terms, it’s like losing the energy demand of India. Rich countries will show a steeper decline, with the U.S. falling 9% and the European Union losing 11%.

While all sources of energy — oil, coal, natural gas, and even nuclear — will see a decline, renewable energy is likely to be the bright spot. And though emissions will fall drastically, the IEA expects a sharp rebound without government policies pushing for a green recovery. Here are the key highlights from IEA’s report:

Global oil demand is poised to slump by 9 million barrels a day, or about 9%, to the lowest level since 2012. By the end of March, road transport activity was down about 50% around the world, while air travel in some European countries had plunged more than 90%. As lockdowns continue, April will see the deepest decline, with fuel consumption slumping almost a third to the lowest since 1995.

With demand in freefall, even prodigious efforts being undertaken by the OPEC cartel and its allies to stabilize markets won’t be enough to shield the global oil industry from chaos, the agency warned. Some producing regions will suffer a “disorderly production shutdown,” it said.

Global coal demand is heading for its biggest fall since World War II — about 8% — as the case for burning the dirtiest fossil fuel is further undermined by the pandemic. The fuel’s share in the electricity mix in India, China, Europe, and parts of the U.S. These four regions have large and varied electricity markets, and yet uniformly coal becomes the biggest victim when demand falls.

Burning coal for power in several European countries has and socially untenable — crowded out by cheap gas and the proliferation of renewable energy as well as powerful environmental movements. The pandemic has only served to . 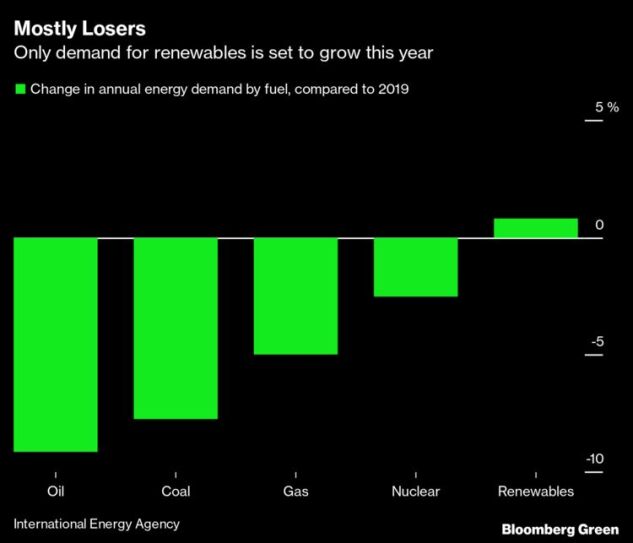 Natural gas consumption was falling in the first quarter even before the Covid-19 pandemic hit Europe, mainly due to a mild winter in the northern hemisphere. The lockdowns accelerate that decline, with global demand expected to decrease by 5% this year — the first annual drop in consumption since 2009 and a huge shock to an industry that has grown accustomed to continued growth.

Much of this decline will come from power generation as the increasing shift toward renewable energy and low overall power demand is squeezing out the role of natural gas in production. Europe is expected to see a drop of 7%, whereas North America’s decline is likely to be less severe, propped up by ultra-low prices.

Even as overall demand has decreased, renewables in many countries get first priority to feed electricity into the grid. That means producers of solar, wind and hydro power can sell all of the power they produce even as fossil-fuel generators turn down or shut off completely to prevent a system overload. Solar and wind farms have also benefited from windier and sunnier conditions than normal in .

In 2019, along with nuclear, low-carbon sources overtook coal for the first time ever. With the boost renewables get this year, the lead is set to extend, leaving low-carbon sources responsible for 40% of global electricity generation.

It hasn’t been all positive for the sector. Like much of the global economy, the coronavirus has disrupted the supply chains for wind and solar farms. About 11% of the world’s wind turbines were shut this week because of the virus, according to . Work to build new wind farms has also been disrupted by restrictions on workers and regulatory processes being delayed. That could lead to a slowdown in new renewable energy projects coming online this year. 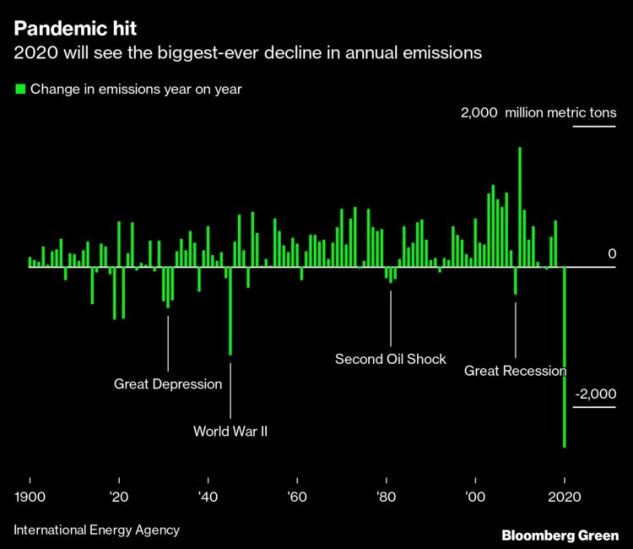 With fossil-fuel use taking such a big hit, it’s no surprise that emissions will fall. An 8% decline is larger than most early estimates, and bigger than what the most ambitious scenario to keep global warming under check demands. Yet, that decline probably is to hold off further increases in the earth’s temperature or the stock of greenhouse gases that have built up in the atmosphere, the IEA said.

The more ambitious target set under the Paris climate agreement — keeping temperature rise below 1.5 degrees Celsius — will require halving annual global emissions by 2030 and hitting net-zero emissions sometime around the middle of the century. Without deep structural changes, emissions are expected to rise again when economies recover.

“Governments can learn from that experience by putting clean energy technologies — renewables, efficiency, batteries, hydrogen and carbon capture — at the heart of their plans for economic recovery,” Birol said. “Investing in those areas can create jobs, make economies more competitive and steer the world towards a more resilient and cleaner energy future.”

To contact the editor responsible for this story:
at landberg@bloomberg.net