Cities and states with big ambitions to reduce landfill waste by 2020 are falling short of their goals as the markets for recyclables are changing and the cost to process them is going up.

Recycling and other methods of diverting trash can reduce the growth of landfills—a source of the potent greenhouse gas methane—while conserving raw materials and the energy it takes to produce them.

But China’s decision to stop taking most recyclables from the U.S. in 2018 roughly cut in half the revenue from selling the recyclables people put in their curbside bins, according to a report from the Solid Waste Association of North America Applied Research Foundation. Agencies nationwide are having to to rethink how to address the pollution, land use, and sustainability concerns that come with more trash. 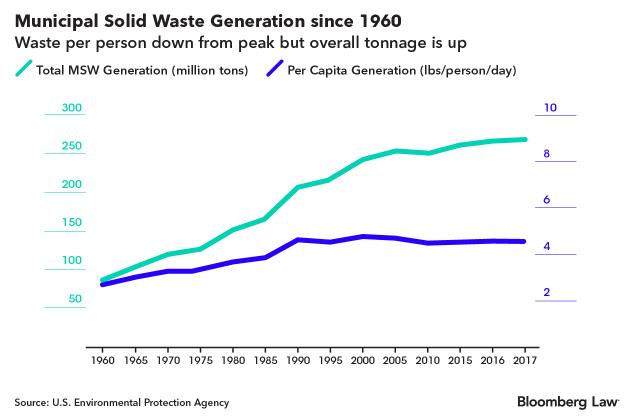 The challenges go beyond China’s changes for state and local governments that in recent years set aggressive visions for the new decade. Many have seen little movement in their recycling rates since they set their 2020 targets due to national and location-specific obstacles.

Waste diversion and recycling goals are largely aspirational, calculated using different methods, and hard to compare across locations. But the difficulty meeting them is widely shared by places actively trying to cut down on trash.

“I think this is a nationwide issue, and the U.S. as a whole has not upped its game on recycling,” said Adam Ortiz, director of Montgomery County, Md.'s, Department of Environmental Protection, which is considering how to boost a diversion rate that has seen minimal growth in recent years and is behind in meeting its 2020 recycling goal.

Ortiz said China’s new policy could emphasize the need in the U.S. for building a more resilient recycling market. Recycling has been taken for granted, he said.

The potential for innovation is growing with interest in circular economies, which minimize waste through recycling and reuse, said Mark Bernstein, chair of Arizona State University’s Rob and Melani Walton Sustainability Solutions Service. The ASU service consults with organizations and governments, including the city of Phoenix.

Bloomberg Environment looked at five cities, three states, one county, and one university that set 2020 markers to increase recycling above the national average, which has plateaued at about 35% for recycling and composting. None has met its goals, and most don’t think they’ll meet them later this year, either. 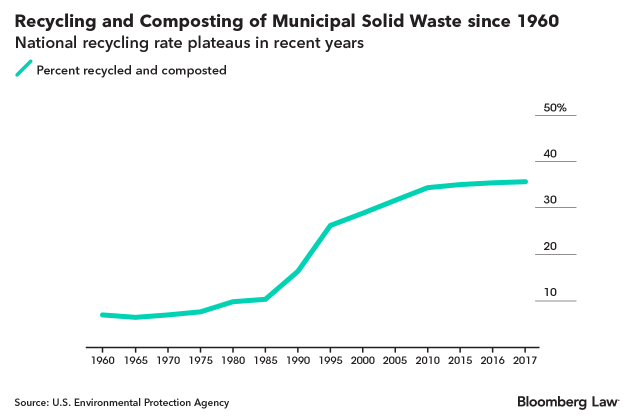 Curbside recycling was built on an inherently volatile business model, Jon Vander Ark, president of trash and recycling disposal company Republic Services Inc., said during a recent solid waste industry conference in Phoenix. Prices for recyclables such as paper and cardboard have dropped since China stopped taking them, he said.

Phoenix, for example, received $12 million from selling recyclables about eight years ago, according to the public works department, compared to a projected $3.3 million for 2019-20. Inflation, a growing population, and rising maintenance and employee costs are also contributing to a potential deficit in the city’s solid waste program.

Keeping the current composting, recycling, and trash pickup would require about a 24% increase to the monthly base rate of $26.80 that households pay, which has remained the same for a decade. Another option city leaders are considering is to stop recycling.

“Do we want to be the largest city in the country without recycling?” Phoenix Mayor Kate Gallego asked at a meeting on the issue last year. A decision by the City Council could come soon.

Cutting recycling would hamper efforts to divert 40% of the city’s waste by the end of 2020 and reach zero waste by 2050.

Ending recycling creates other costs as well by putting more pressure on landfills, said Cooper Martin, director of sustainability and solutions for the National League of Cities.

Phoenix, like other places, is also looking for new ways to use its waste.

The city built a resource innovation campus that includes an incubator for entrepreneurs to test making energy or products out of the city’s trash.

A partnership in the works that includes the Salt Lake City-based company Renewlogy aims to turn low-value plastics like wrappers and plastic tubs into fuel. The proposal outlines breaking down mixed, shredded plastics through a chemical process.

Strengthening markets within the U.S. and improving coordination with packaging design and other parts of the recycling chain are an EPA priority, according to a framework for advancing recycling in the U.S. released in November. Successes identified by the agency include efforts by regional and industry groups to look at how to use more recycled materials for purposes like glass containers and infrastructure projects.

The Plastics Industry Association has focused on researching end markets for plastic film used in plastic bags and wraps, such as using recycled plastics in asphalt.

Composted organic waste also has been sold as products in some cities and counties.

San Diego, for example, sells mulch and a soil enhancer from the yard waste and food scraps it collects.

The city’s rate of diverting waste from landfills is 65%, compared to its 2020 goal of 75%, Julie Sands Tyne, the city’s supervising recycling specialist, said. Progress is slower than hoped partly because of a lack of places to process organic waste, she said.

In addition, the city’s trucks only collect from single-family homes. Private trash collectors pick up from multifamily properties and commercial and industrial waste, and part of the city’s goal is reducing the amount of waste headed to landfills from those sources.

In Oregon, a steering committee looking at the state’s recycling system will consider the best end use for materials and whether Oregon might work with Washington state in regional recycling.

Oregon, which doesn’t anticipate meeting its targeted 52% recovery rate this year, saw the market for wood waste dwindle after a mill that burned it for fuel closed several years ago, said Peter Spendelow, waste reduction specialist at the Oregon Department of Environmental Quality.

And in Florida, which is well below its 2020 statewide recycling goal of 75%, more construction and demolition debris in the landfill contributed to recent declines in recycling rates. The state Department of Environmental Protection lists options for recycling waste like wood, concrete, and metal, but notes the quick project time lines and budgets can limit participation.

‘Laws That Chart the Path’

Other cities are reducing the use of some plastics to prevent them from ending up in landfills.

San Francisco, which once aimed for zero waste by 2020, wants to cut landfill disposal and incineration in half and solid waste generation 15% by 2030, according to Robert Haley, zero waste program manager for the San Francisco Department of the Environment. Initiatives this year include an ordinance to require businesses to provide straws and single-use food ware only on request, increasing the charge for checkout bags, and discouraging nonreusable takeout containers.

Meanwhile, new California rules that start in 2022 will require reductions in organic waste that goes to landfills and preventing food waste. The state sees expanding composting as one way to reduce methane produced from landfills.

California won’t achieve its goal of reducing, composting, or recycling 75% of its waste by 2020, but setting that target initiated a host of changes that will get California there, CalRecycle spokeswoman Christina Files said.

“It’s ambitious, it’s aspirational, but we definitely have specific laws that chart the path,” she said.