Waves generated from the remnants of Hurricane Sandy crash into the shoreline of Lake Michigan on Oct. 30, 2012, in Chicago.
Photographer: Scott Olson/Getty Images

Since January 2019, each of the five Great Lakes recorded its highest or second highest level in at least 100 years, National Oceanic and Atmospheric Administration data showed. But the region also experienced drought-like conditions in 2013 not seen since the 1960s, illustrating the recent turbulent impact of climate change on the lakes’ water levels, said a government researcher working in the region.

“It’s definitely climate related,” said Eric Anderson, an oceanographer at NOAA’s Great Lakes Environmental Research Laboratory who studies the movement of the lakes’ water. “The things that control lake levels, like precipitation and evaporation, those are driven by climate trends—no doubt about it.”

Climate change is increasing the severity and frequency of water-level fluctuations, scientists said. And climate models project a likely increase in the number of severe rains and snowfalls in coming years, which could lead to more waterfront damage in cities like Chicago, greater regional flooding of Midwest farms, and changes in the lakes’ plant and animal life.

The Great Lakes region “more generally had always been considered sort of a haven from climate change,” said David Strifling, director of Marquette University Law School’s Water Law and Policy Initiative. “And this is showing us that may not be the case after all, that we’re being inundated as well.” 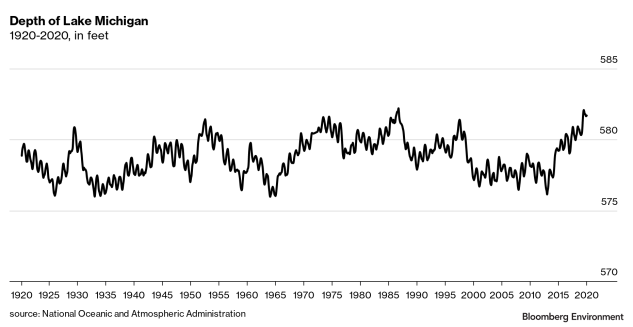 Nationally, climate change in the U.S. has led to increases in heavy downpours during the last 50 years, with especially large increases in the Midwest and Great Plains, a major 2014 U.S. Global Change Research Program report said.

Duluth was hit with three severe storms between October 2017 and October 2018. Rebuilding its downtown lakefront area will cost more than $30 million. As it recovers, the municipality must decide whether to re-armor its defenses.

It’s much cheaper in Duluth to move assets away from Lake Superior than to fortify defenses against continued lake-water surges, Filby Williams said. Relocating assets, however, can involve “really hard neighborhood conversations” if the desired relocation area for the infrastructure is privately owned, he said.

And any planning must contemplate continuing fluctuations.

“Our federal and state agency partners are telling us that we should expect and plan for more of the same: more intense, more frequent storms as climate change intensifies,” Filby Williams said. “And while the impacts on lake levels are less clear in terms of whether they are higher or lower on net, it does seem to be clear lake levels are going to be more volatile than they have been in the past, going up and down with greater speed.”

In the nation’s capital, the Senate Homeland Security and Governmental Affairs Committee on March 11 approved legislation (S. 3418) that would provide $100 million in loans each fiscal year from 2021-2023 to help local governments in the Great Lakes region respond to higher lake water, erosion and flooding.

The bill by Sens. Gary Peters (D-Mich.) and Ron Johnson (R-Wis.) now goes to the full Senate for a vote.

“We need as many tools as possible to help mitigate against the effects of these disasters,” Peters said in a statement.

Between 2001 and 2016 the Great Lakes states experienced larger precipitation changes than any other region in the country, NOAA data show. But the lakes also recorded historically low water levels in 1926 and 1964.

In the seven years since historically low lake levels in 2013, the water levels have increased at a faster rate than at any other time in recorded history, Andrew Gronewold, a University of Michigan School for Environment and Sustainability associate professor, said in an interview.

In Michigan, precipitation at the end of 2019 ended the wettest five-year period since 1900, Patrick Bak, a National Weather Service meteorologist, said in an email. The boost in precipitation led to increased flooding, lake-level rises, and 20-foot waves crashing against Lake Michigan and Lake Superior shore lines.

The other lakes—Erie, Huron and Ontario—were also above their average levels, the Army Corps of Engineers reported.

“The flooding we’ve have in the last few years, and specifically in the past few winters, has been completely abnormal and illustrate unprecedented patterns of weather,” said Aaron Packman, a professor of civil and environmental engineering at Northwestern University and director of the school’s Center for Water Research.

“The ecosystem damage along those shorelines can be severe,” said Strifling, of Marquette University Law School. “It can also make them more susceptible to invasive species that are better able to handle those changing conditions.” 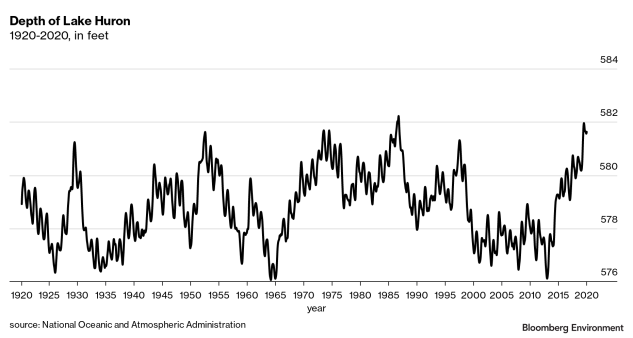 Some fish and other aquatic life are temperature sensitive and may migrate to colder waters when water temperatures increase. This can fundamentally alter food-chain and predator-prey dynamics, changing not only the Great Lakes basin but its tourism and fishing industries, which accounted for more than $22 billion annually according to a March 2019 Environmental Law & Policy Center report.

Flooding also can overwhelm water treatment infrastructure, which can increase sewer overflows and the quantity of water-born pathogens flowing into streams, rivers, and the Great Lakes, the water supply to more than 30 million U.S. and Canadian citizens.

“We need to find a way over time to live with higher highs and lower lows because precipitation and evaporation are the real drivers for lake levels, and we can’t control those immediately,” said Cameron Davis, who coordinated the Obama administration’s interdepartmental Great Lakes restoration effort and is now a commissioner at the Metropolitan Water Reclamation District of Greater Chicago. “We can’t build or siphon our way into managing lake levels.”