The U.S Nuclear Regulatory Commission logo sits next to the U.S. flag during a meeting at the NRC headquarters in Rockville, Md.
Photographer: Andrew Harrer/Bloomberg via Getty Images

The nuclear power industry is betting its future on a new generation of reactors small enough to fit on a truck—an emerging technology that mostly uses alternatives to water for cooling, runs at lower pressure than traditional units, and costs far less than the behemoth power plants and cooling towers that define the nuclear landscape today.

But advocates of the idea insist that the folks in Washington who police their business have no idea how to assess it. Today’s rules are “really a square peg in a round hole for these advanced reactor designs,” says , a partner with the law firm who’s worked on dozens of license applications. The , she says, is “largely divorced of actually understanding—in depth—the technology.”

Congress has ordered the NRC to write rules to replace a regulatory framework that dates to the 1950s. The new guidelines aren’t expected until at least 2025, so for now the agency is operating as it has for decades, evaluating plants that bear scant resemblance to those the regulations were meant to assess. To prove the safety of designs, for instance, the commission demands data from similar plants, but none of the smaller installations have been built in the U.S., so there’s no performance history. And the rules are geared toward so-called light-water reactors, which split uranium atoms to create steam that drives turbines. The newer technology typically uses substances such as molten salt and lead, or gases like helium, to keep the core from overheating. No company employing these technologies has won a construction license, and only one design—a water-cooled model from —has been . The NRC declined to make any commissioners or staffers available for an interview on the subject. 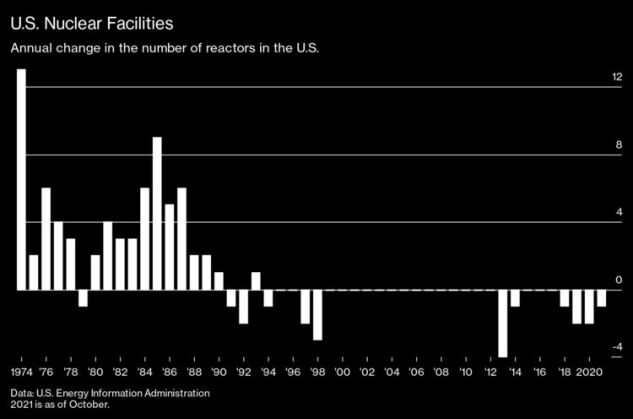 Proponents of the micro-plants, which started to spark serious interest about a decade ago, say that because nukes release no carbon, they can move the Biden administration toward its goal of from power generation by 2035. In that respect, the U.S. Department of Energy has gotten ahead of the NRC. The department is asking Congress for as much as $4 billion over seven years for advanced reactor development. Beneficiaries include , a startup founded by that’s working on a project in Wyoming; , which is planning a high-temperature, gas-cooled reactor in Washington state; and , which aims to build a 35-megawatt salt-cooled test reactor in Tennessee and applied for a construction license last September. Advanced reactors “have enormous promise” and will continue to have support from the agency, Energy Secretary said during a Jan. 25 meeting with her advisers.

But with the accidents at Three Mile Island, Chernobyl, and Fukushima Daiichi still fresh in many people’s minds, these plants face staunch opposition. Environmental groups say that small reactors—some have a capacity of only 1.5MW, about 0.1% the size of a traditional plant—still produce enough radioactive material to present a contamination risk. And building more plants, even small ones, will add to the pile of toxic waste that no one can figure out what do with. “To the extent that there will be efforts to weaken the regulatory envelope, we will aggressively push back,” says , an attorney with the .

, more than 70 small modular reactors, with a total capacity of about 12 gigawatts, have been proposed or are under development in at least five countries, according to the International Atomic Energy Agency. The only one that’s been built is a floating reactor in the Russian town of Pevek, on the Arctic Sea, where it’s used to power mining operations. , who served as NRC chair from 2009 to 2012, says the lack of movement on such plants around the world suggests we would be wrong to count on them as a way out of the climate crisis. “They’re just not ready,” he says. “And by the time they could be ready, they’re not going to be useful.” 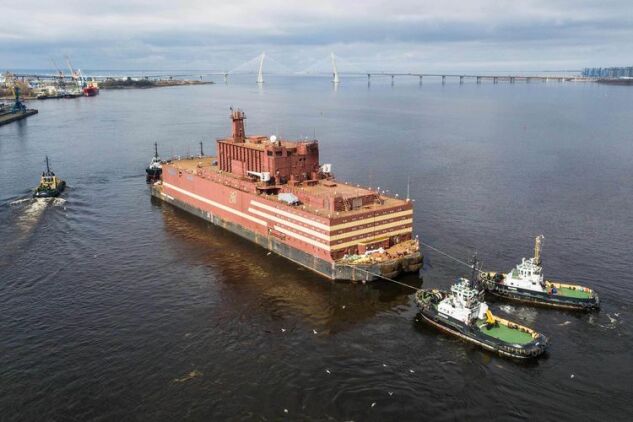 The infrastructure bill passed in November includes $2.5 billion for research into advanced reactors as well as $6 billion in federal subsidies for plants in operation. And the Democrats’ Build Back Better package stuck in the Senate includes a $35 billion nuclear production tax credit. In December, Senator (D-W.Va.), and Senator (R-Wyo.), the top members of the Senate Committee on Energy and Natural Resources, introduced legislation to near shuttered fossil fuel power plants, saying the idea could give a lift to struggling communities.

The NRC says at least two dozen developers are working on new designs. NuScale’s 50MW model, backed by as much as $1.3 billion from the Energy Department, was greenlighted after receiving 17 exemptions from current licensing requirements, though developers would still have to obtain a construction and operating license to build one. In January, after almost two years of review, the commission rejected an application from Oklo Power LLC for a 1.5MW reactor expected to run on radioactive waste, citing a “significant” lack of safety information. Oklo says its technology is ready and the decision simply highlighted the commissioners’ adherence to the old rules. “It’s not surprising, because we’re doing something new,” says Chief Executive Officer Jacob DeWitte, who plans to submit a revised application this year. “It’s a departure from what they’re used to seeing.”

Almost 100 nuclear reactors operate in the U.S. today, producing about 20% of the country’s electricity. In recent years, the aging nuclear fleet has struggled financially amid competition from low-cost natural gas and renewables. The industry has pressed policymakers to preserve the existing fleet and scale up next-generation plants.

In 2019, Congress passed a law requiring the NRC to develop a licensing framework for advanced reactors by 2027. Since then lawmakers from both parties have demanded the NRC implement new regulations faster, noting at least 50 reactor designs are under development, spurring the commission to accelerate its target date to 2025. The deliberate pace makes sense, says , who chaired the commission from 2015 to 2017. It has studied the new reactors for years but has repeatedly decided against updating its licensing rules, largely because the technology hadn’t yet scaled up and there was no guarantee it ever would be, he says. “It wasn’t clear who was really going to be coming in the door,” Burns says. “Are we going to spend the money to do this for something that may or may not come along?” —With

To contact the author of this story:
in Arlington at dmoore279@bloomberg.net

To contact the editor responsible for this story:
at drocks1@bloomberg.net