Not long after Scott Pruitt became EPA chief, his office swiftly went to work trying to comply with a Republican House member’s request to ease air pollution limits on trucks with rebuilt engines, Abby Smith reports this morning in an exclusive story.

In 2017, then-Tennessee Rep. Diane Black urged Pruitt to undo limits on “glider kits"—new truck chassis and cab assemblies built for used engines and transmissions. Her office heard back from an EPA official within a week saying Pruitt “wants to be helpful,” according to emails obtained under the Freedom of Information Act.

The agency’s move drew widespread opposition. But it had support from the glider kit makers it would benefit—including Fitzgerald Glider Kits, the largest U.S. maker of the equipment, and headquartered in the district Black represented until January.

The EPA didn’t initially publicly release Pruitt’s calendar, shielding from the public his meetings with companies such as Fitzgerald.

“What strikes me here is the total lack of transparency,” says Steven Silverman, a former attorney who worked in EPA’s Office of General Counsel from 1980 to 2017.

MERCURY HEARING: The EPA holds what promises to be a raucous daylong public hearing today on its proposal to retain 2012 mercury and air toxic standards despite undoing the legal basis for the rule.

Although the agency wants to leave the rule in place, it is also taking comment on the option of repealing it, claiming that the direct benefits of reducing mercury pollution aren’t justified by the high costs of meeting the 2012 limits. That option has managed to unite the power industry—as represented by the Edison Electric Institute. But public health scientists, Obama EPA officials, and environmental engineers in crying foul.

Delaware Democratic Sen. Tom Carper, the top Democrat on the Senate’s environment committee, has expressed concern that a court would toss out the standards because of the way the EPA has proposed to undo the legal basis. He has signed up to speak at the hearing. 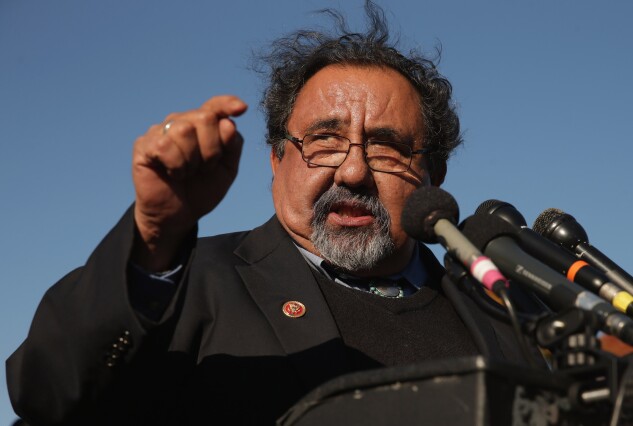 “This is a smash-and-grab job on our environment.”
—House Natural Resources Committee Chairman Raul Grijalva (D-Ariz.), reacting to rule changes allowing oil and gas drilling, mining, and other development activities in greater sage grouse habitat areas that were previously off-limits.

Of all the props Mark Calzaretta has used to help juries understand environmental contamination, his favorite was Jell-O in a fish tank.

As founding partner and director of litigation consulting at Magna Legal Services, a Philadelphia-based company that provides legal support and jury consulting, Calzaretta works with attorneys to do jury research, develop case strategies, prepare witnesses, and create visual aids to help tell the stories behind a case in easy-to-understand terms.

“We create the visual strategy to go along with the story,” he said.

Calzaretta, who has a degree in psychology and anthropology, has worked in litigation consulting for more than 15 years. He wouldn’t discuss his clients, though his website says he’s worked on “numerous asbestos cases” and “numerous toxic tort cases.”

Complex environmental cases often need visuals to explain to juries how contaminants from one place move to another. Magna sometimes flies planes over a site and uses lasers to map out terrain, or drills into bedrock below contaminated sites to get samples of what lies underneath.

The Jell-O was used to help explain the term “DNAPL.” Short for “dense nonaqueous-phase liquids,” environmental engineers use the acronym to describe toxic contaminants that are both denser than water and don’t dissolve.

Chlorinated solvents such as tetrachloroethene and trichloroethene are examples of DNAPLs that linger in the soil and water around old manufacturing sites.

A company tried to convince the jury it was impossible that residual chemicals from its product could have fallen to the bottom of a pond and seeped into groundwater. Calzaretta’s team brought in a five-gallon fish tank into the court room, dumped a dessert cup of green Jell-O in the tank, and let the jury watch it sink to the rocks on the bottom.

If they waited long enough, the team explained, the Jell-O would ooze down into the rocks to layer underneath.

“That’s what happens when you put contaminants into the water system,” Calzaretta said. “And all the jurors were like, ‘That’s awesome. I totally get it! How could it not get in the groundwater?’” —Leslie A. Pappas

This Week’s Events (all times Eastern):