A good marijuana plant used to be one that grew well indoors and generated the best high for users.

But with more states and Canada legalizing marijuana for medical and recreational use, scientists and plant breeders are looking to the plant’s genetic map to create pot that produces more health benefits and requires fewer pesticides to grow.

At least three projects are in the late stages of mapping the cannabis plant genome. Tying specific genes to plant characteristics could allow growers to emphasize compounds that manage pain, control epileptic seizures, and regulate moods while reducing THC, the substance that gets users high and keeps marijuana illegal on the federal level.

Ten states and Washington, D.C., have legalized recreational marijuana, and medical marijuana is allowed in 33 states. Canada is building a multibillion-dollar recreational market since it legalized pot in October. New Jersey could soon become the next state to legalize the drug.

When Congress cleared the 2018 farm bill Dec. 13, it legalized hemp, or cannabis that contains less than 0.3 percent THC.

Two recent scientific papers on the genome of cannabis sativa have been made public, one of which is still undergoing peer review. The papers identify genes in all 10 chromosomes of the cannabis plant and are expected to be the most complete cannabis genomes to date.

Front Range Biosciences is also working with the University of California, Davis on mapping the cannabis genome.

The best way to think of a genome, the entire group of genes in an organism, is to use a book as a metaphor, Anna Schwabe, a doctoral student in genetics at the University of Northern Colorado in Greeley, told Bloomberg Environment.

The chapters are the chromosomes, the paragraphs are chunks of DNA, and the words and letters are amino acid base pairs that serve as the building blocks for DNA. An attribute is the theme that comes up throughout the book.

So far, the cannabis genome is a lot of words, sentences, and paragraphs in no particular order, Schwabe said. Scientists know they came from the same book and somehow all fit together, but at this point haven’t made much sense of how to use the information for practical applications. 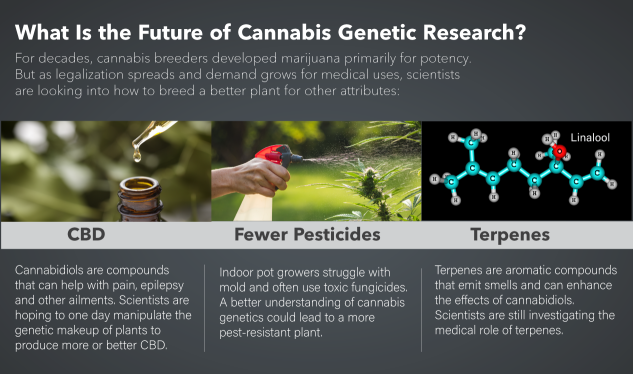 One opportunity for geneticists lies with terpenes, aromatic compounds that can regulate moods. Lavender’s calming scent, for example, comes from the terpene linalool. Terpenes could enhance the health benefits of cannabidiols (CBD)—compounds without the intoxicating effect of THC.

There’s also interest in making a hardier plant that can withstand common cannabis pests such as mold. Many growers use fungicides and insecticides, including the mold killer myclobutanil, which release toxic fumes when heated.

A big challenge for science is the lack of a wild ancestor for cannabis, Schwabe said. Wild varieties in other crops provide a baseline to see how a plant evolved from that point.

“It’s really hard as far as genetics go because we don’t have that missing piece,” Schwabe said. While many in the field are excited at the future prospects of genetic research in the plant, Schwabe is more cautious. She thinks there are too many unknowns in the genome.

“I personally don’t see it in the near future,” Schwabe said.

Keith Allen spent 10 years at agricultural technology company Syngenta AG, where he worked to find genes to enhance yields in tomatoes and other crops. Today, he’s director of bioinformatics at Steep Hill Laboratories, a Berkeley, Calif.- based cannabis quality testing company, and looking for genetic clues to make better cannabis.

The research into THC and CBD’s role in treating conditions like seizures and autism symptoms creates a starting point for researching other molecules in the cannabis family, Allen said. It has earned recognition from the mainstream pharmaceutical industry and federal regulators.

The scientific community doesn’t yet know what other uses they will discover for the plant, Allen said, especially since it appears that many of the compounds work together to create a given effect. The molecules are low-hanging fruit for investigation, Allen said, because their genetic profiles are similar.

Gene Editing Around the Corner

The cannabis industry is poised to take advantage of marker-assisted selection, in which a molecular marker highlights a gene with a desirable trait. The technology speeds up traditional breeding by allowing breeders to screen for certain traits, making the process much faster and less expensive.

Fungal resistance is an obvious target and “a relatively easy one to go after,” Allen of Steep Hill said.

Gene-editing techniques, such as CRISPR-Cas9, in which geneticists can knock out certain genes in a genome to express a desired trait, has been applied to everything from apples that don’t brown to soybeans that produce more heart-healthy omega-3 fatty acids.

It’s a promising future for cannabis, but not yet within reach, said Daniela Vergara, a postdoctoral research associate researching cannabis genomics at the University of Colorado, Boulder.

“I don’t think we’re there yet, but we’re going to be there soon,” Vergara, who heads the Agricultural Genomics Foundation, an organization dedicated to furthering public understanding on cannabis research, told Bloomberg Environment.

One looming question is how these technologies, and the products that come out of genetic advances, will be regulated or standardized. There’s little oversight of some of the current claims from CBD product makers, and the FDA has little bandwidth to go after anyone but the most egregious violators—companies that claim CBD cures cancer, for example—Vaught said.

For marijuana, there’s a lot of variation across thousands of strains, Schwabe of the University of Northern Colorado said. Two dispensaries that sell “Blue Dream” cannabis may have, in fact, two different products.

“There’s no way to certify or register those strains,” Schwabe said. “I would like to see some standardization.”

State agencies operate with fewer resources than the federal government, and offer only a pockmarked map of oversight.

“I think that the fact that cannabis is not legal on the federal level makes everything harder,” Vergara said.

Scientists are also wary of how consumers will embrace biotech cannabis.

Genetic engineering, the splicing of genes from one organism’s DNA to another, helped the agriculture industry produce more food with less labor. Monsanto Co.'s suite of Roundup-ready crops—from seeds that grew into plants that resisted glyphosate, the main ingredient in Roundup—helped reduce harmful soil tillage as farmers sprayed the herbicide without killing crops.

Mainstream scientific organizations have concluded that GMO crops aren’t harmful. But the technology was poorly received by a wary public, who feared genetically modified crops could be detrimental to health and the environment.

When the company tried to promote the idea of molecular markers to its breeders, many refused to work with them. One competing lab even spread rumors that Steep Hill would steal genetic material and put a patent on it, leaving breeders out.

“We got a lot of pushback because they thought we would be the next Monsanto,” Gaudino said.

While some of that thinking is falling by the wayside, more breeders are seeing the benefits of genetic tools, Gaudino said.

“We are just now starting to get regular inquiries about our services,” Gaudino said.

Tiffany Stecker
Reporter
Farm Bill Clears House After Removal of Trump-Backed Work Rules
ALL ABOUT: Marijuana and Energy Efficiency
Pot Laced with Pesticides Forces States to Act as EPA Stays Away
© 2022 The Bureau of National Affairs, Inc.
All Rights Reserved