Americans use more than 380 billion single-use plastic bags a year. Or do they?

That figure was the one advocates in New York cited when they pushed successfully for a statewide bag ban that takes effect next month. And it came up again in news reports when Oregon’s ban took effect Jan. 1.

Google search results show the statistic surfacing on millions of websites across the globe, in everything from blogs about sea turtles to municipal government websites.

And more and more states across the country are relying on that 380-billion-bags-used-annually data point in order to estimate their own plastic waste.

But where did it originate. The estimate is often linked to the U.S. Environmental Protection Agency (although it’s unclear if the EPA backs it), may be at least two decades old, and could be wildly inaccurate.

The International Trade Commission used data from U.S. plastic bag producers as well as imports from other countries, and information collected through questionnaires and customs records, to arrive at its own estimate. Its figures put the annual plastic bags sold in 2014 at 103.5 billion polyethylene retail bags—a little more than a quarter of the 380 billion figure.

Plastic bags are often used only once, but then persist for years in the environment, sticking to trees, clogging rivers, and harming wildlife. They’re clearly an environmental problem and used in the billions. So why does the precise number matter?

For one, lack of good data makes it hard for lawmakers to predict the revenue a state would bring in from—for instance—banning plastic bags and placing fees on paper or reusable bags.

“It’s something to keep in mind, because people really want to be able to visualize” the scale of the issue, said Jennie Romer, an attorney with the Surfrider Foundation, an environmental organization.

California in 2014 was the first state to ban most single-use plastic bags. Similar legislation has since passed in New York, Connecticut, Delaware, Maine, Oregon, and Vermont, as states seek to cut back on one of the most visible symbols of plastic waste.

And there are 471 local plastic bag ordinances in 28 states, including every Hawaii county, according to the Surfrider Foundation.

The implementation of New York’s law, which takes effect March 1, has drawn the interest of plastic industry officials and environmentalists anxious to see how it plays out in one of the nation’s most populous states.

Gov. Andrew M. Cuomo (D) said New Yorkers use approximately 23 billion single-use plastic bags annually when he signed the legislation in April 2019. The state took that number from an Equinox Center report, which in turn cited another article, which led back to 380 billion—divided by New York’s population. 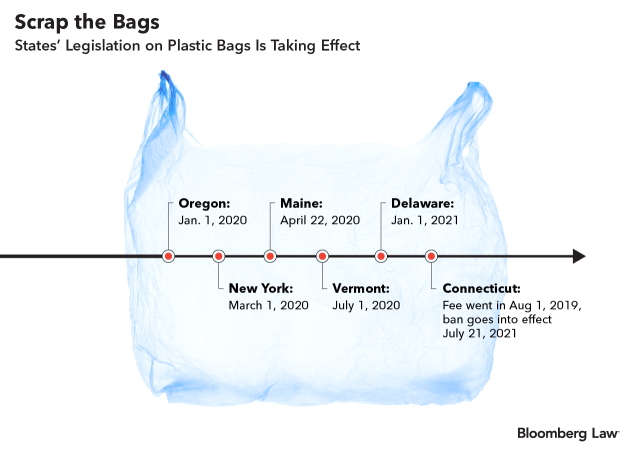 That 380 billion appears in a 2016 blog post written by an EPA employee: “In the United States, according to the EPA, we use over 380 billion plastic bags and wraps yearly, requiring 12 million barrels of oil to create.” But the blog post doesn’t link to any data backing up the number.

The EPA declined to comment on the record about where the statistic came from.

“The data doesn’t exist to prove that bag bans are the right thing to do,” said Matt Seaholm, executive director of the American Progressive Bag Alliance, which represents the plastic bag manufacturing and recycling industry.

There also is no reliable state-by-state breakdowns of bags used, Seaholm said. “This is always kind of the question of, ‘How do you even show success?’”

Some states, like California, and municipalities, like Chicago—which placed a 7-cent fee on plastic bags in 2017—have conducted their own studies to measure effectiveness.

Chicago’s study included observational data, with someone standing in a grocery store counting the number of bags customers left with, according to Romer, from the Surfrider environmental group. That snapshot could then be compared with bag use post-ban to see any changes in consumer habits.

Romer said she tries to stay out of the argument over statistics, instead focusing on what her organization sees. And single-use plastic bags are always in the top 10 items found on beaches during the group’s annual cleanups.

“We always want to make sure that we’re advocating for laws that work,” Romer said.

‘Do Statistics Float Around Untethered?’

The earliest use of the 380 billion figure appears to be from 2000, in a news release from the home and furniture store IKEA announcing its “Bag the Plastic Bag” initiative. IKEA said it got that figure from the EPA—and linked to a website that is no longer available.

“There’s a lot of published numbers that are ridiculous, and you have to go and figure out where they came from,” said Andrew Gelman, professor of statistics and political science and member of the Data Science Institute at Columbia University.

But once a number is publicized, it can get replicated even if it’s not necessarily accurate, he said

“Is it hurting people to use the wrong number? Maybe not,” he said. “Do statistics float around untethered? Yes, all the time.”