Sewage treatment plants around the country and many of the factories that send them wastewater face a new and shifting array of regulations over how they handle PFAS.

The reach of federal and state policies to reduce health risks from PFAS eventually could be broad because the chemicals are used in thousands of products and found in the bodies of 98% of people in the US.

When human and industrial waste is flushed into public sewage systems and treated, the result is sludge, which increasingly is found by emerging chemical detection technologies to contain PFAS. Some states are moving to limit PFAS in the millions of tons of this sludge, or biosolids, spread on farms, golf courses, and other lands, and used to reclaim mines, remediate contaminated sites, and build roads. 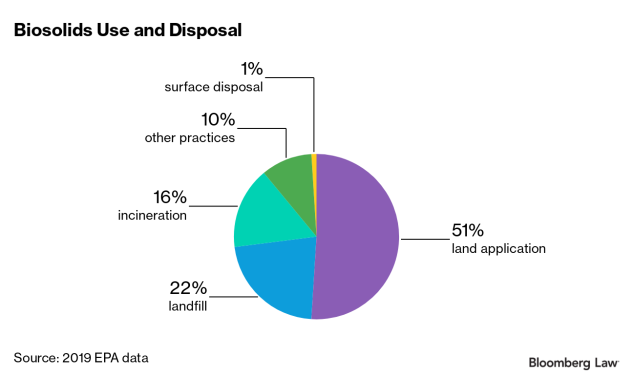 The Environmental Protection Agency is deciding whether to regulate wastewaters and biosolids with PFAS, a process that would take years. In the meantime, the states that already regulate other exposures to per- and polyfluoroalkyl substances (PFAS) are beginning to control biosolids and the upstream industries that release wastewater containing the chemicals into public sewer systems, six water officials and attorneys said during recent interviews.

The states aim to prevent further contamination by putting limits—or in the case of Maine, a ban—on biosolids spread on land.

PFAS pose tremendous challenges because regulations and health advisories are triggered by incredibly low concentrations of the chemicals and the types of PFAS targeted for regulation don’t degrade, said Peter Wright, a partner with Barnes and Thornburg LLP who led EPA’s Office of Land and Emergency Management during the Trump administration.

Three Maine farms have been driven out of business by PFAS spread on the property decades ago, Sarah Woodbury, advocacy director at Defend Our Health, a group calling for a ban on biosolids as fertilizer, said during a recent webinar.

PFAS are often called forever chemicals because some of them don’t break down in the environment. Exposure to certain levels of PFAS may cause adverse health effects including increased risk of some cancers, according to the EPA. Sources include landfills, chemical producers, and textile mills.

The EPA has reported that this fall it will release the first test verified in multiple labs to measure 40 PFAS in wastewater, biosolids, and other media. That’s part of many other EPA research efforts underway to better understand the chemicals, their risks, and when regulations are warranted.

While that research proceeds, a patchwork of state rules and policies is likely to grow, said Alexandra Dapolito Dunn, an environmental law partner at Baker Botts LLP who held senior EPA posts during the Trump administration and has advised water associations and states.

Wastewater treatment plants make easy targets, said Scott Firmin, director of wastewater services for the Portland Water District in Maine. “We smell sometimes. But we are taking the sins of society and cleansing them and discharging clean water. We allow communities to thrive.”

The utilities fear that they’ll become the targets for liability and cleanup costs, said Emily Remmel, director of regulatory affairs at the National Association of Clean Water Agencies (NACWA), which represents public waste- and stormwater agencies.

The EPA plans to propose designating two PFAS—perfluorooctanoic acid (PFOA) and perfluorooctanesulfonic acid (PFOS)—as hazardous substances under the Comprehensive Environmental Response, Compensation, and Liability Act, or CERCLA, also known as the Superfund law. The White House Office of Management and Budget is reviewing the proposal to decide whether the agency can release it.

CERCLA imposes strict liability on parties responsible, in whole or in part, for the presence of hazardous substances at a site.

Even if the EPA and states didn’t target utilities, industries that are responsible for cleaning up a site could sue wastewater treatment plants under CERCLA to recover costs, Wright said.

A statutory exemption from Congress would offer the clearest protection, Wright and Dunn said. Ten water associations asked for such an exemption in an April 28 letter to leaders in relevant House and Senate committees.

Jim Embry, a racial equality and sustainability activist and Kentucky fruit grower whose ancestors were enslaved, hopes a solution can be found. He comes from generations of farmers who have used biosolids as fertilizer.

It’s critical that humans find a way to “get back into rhythm with the Earth’s systems” by repurposing waste, but, research is needed to make sure spreading biosolids is safe, Embry said.

But Ellen Stern Griswold from the Maine Farmland Trust said the risk of food contamination is just too great. Land application should be banned around the country, she said.

“I think consumers are going to really start asking about this issue,” she said.

How Much Is OK?

The chemicals already are increasing the costs of managing biosolids, said Janine Burke-Wells, executive director of the North East Biosolids and Residuals Association (NEBRA). She pointed to a 2020 analysis measuring costs wastewater utilities spent before and after they had to start addressing PFAS, including in their biosolids. Depending on the state, costs increased between 1% and 69% with an average of 37%, the analysis found.

In Pima County, Ariz., biosolids management costs increased from about $1.5 million to just over $3 million during a moratorium the county placed on land application from late 2019 to fall 2020, when the biosolids were put in landfills instead, said Jeff Prevatt, deputy director of the county’s Regional Wastewater Reclamation Department.

The county lifted the ban after a University of Arizona study showed the concentration of PFAS in the utility’s biosolids was so low it posed no risks, Prevatt said.

But how low is low enough is something local governments, scientists and organizations differ on.

Maine initially set thresholds limiting the amount of PFAS in land-applied biosolids after high concentrations of PFOS put one dairy farmer out of business. It banned land application in April after at least two more farmers lost their livelihood due to PFAS from historically applied biosolids from paper mills and wastewater utilities, and the chemicals from one farm contaminated nearby residential wells.

Michigan limits the concentration of PFAS in biosolids. It recently tightened interim standards originally set in 2021 for PFOS. The state bans land application only for the most contaminated biosolids.

Michigan reduces PFAS in public wastewater by “pretreatment” requirements that compel industries to limit the amounts they release.

Pretreatment works with other contaminants, and “we think we can use the same process for PFAS,” said Greg Kester, director of renewable resource programs at the California Association of Sanitation Agencies.

But pretreatment won’t eliminate PFAS, he said. Kester, other utility officials, and health and environmental advocates said the long-term solution is finding alternatives.

—With assistance from Stephen Joyce in Chicago