Oystermen in Florida and farmers in Georgia have been locked in a bitter argument over shared river resources for decades. Their dispute reaches the U.S. Supreme Court on Monday, where justices will face the question of how much water is enough.

“It’s kind of a classic case between this small population and small economy depending on an environmentally sensitive industry, against a huge population and a huge economy by comparison up in Georgia,” said John B. Draper, a leading water rights lawyer based in Santa Fe, N.M. “There’s that kind of David and Goliath aspect to this.”

The conflict coming to the court is an “original jurisdiction” case that goes straight to the justices rather than moving through lower courts first. It’s the kind of water war common among Western states, but relatively rare along the East Coast, said Georgia State University professor Ryan Rowberry.

Lawyers are watching closely for signals about how the justices may approach similar state showdowns, which are expected to pile up as climate change stresses water resources nationwide. 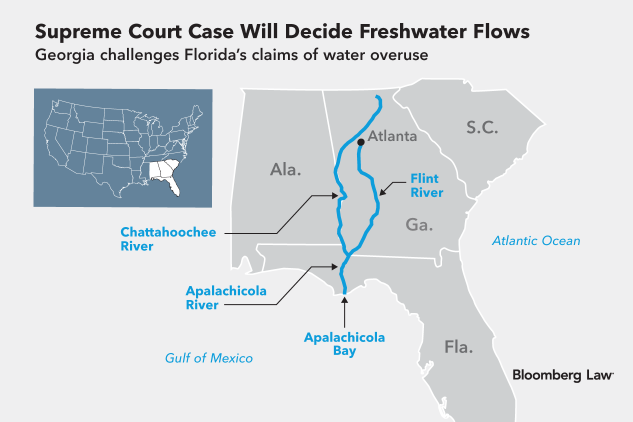 The Florida-Georgia dispute goes back to the 1990s, marked by bitter negotiations, a failed water compact, and multiple trips to court.

The fight involves a Y-shaped trio of rivers: The Chattahoochee River traces Georgia’s border with Alabama, while the Flint River cuts through the middle of Georgia. They both end in a lake at the Florida border, and the waters flow south down the Apalachicola River into the Gulf of Mexico.

The first argument on the Supreme Court’s docket next week is a fight over water rights between Florida and Georgia.@jnkay breaks down the case, and we hear from people living in these states who will be most affected no matter what justices decide 👇 https://t.co/oHzxe5CGSw pic.twitter.com/s2PfEtpdz5

What’s happening in the bay is at the heart of Florida’s case. Ringed by slim barrier islands off Florida’s Panhandle, Apalachicola Bay once supplied 10% of the country’s wild oysters, according to the state wildlife commission. But the fishery collapsed in 2012 amid persistent drought and low water flow conditions.

Florida says Georgia farmers and other businesses use too much water, reducing the supply of freshwater to Apalachicola Bay, and causing the oyster population’s collapse. Georgia counters that the oysters declined because of Florida’s own “shortsighted” management decisions.

Apalachicola Bay oysters, harvested by hand with long rake-like tongs, have been as vital to Florida as lobsters are to New England, the state has said in court documents. But fewer than 21,000 pounds of oysters were harvested from the bay in 2019, according to the state wildlife commission. The five-year average before the 2012 collapse was 2.6 million pounds.

Last year, Florida wildlife officials suspended wild oyster harvests in Apalachicola Bay until the end of 2025 to give the population time to recover and the state time to complete habitat restoration.

In an earlier phase, a court-appointed special master determined Georgia likely deserved some of the blame. But he also said Florida hadn’t shown a Supreme Court order could resolve its problems unless the Army Corps of Engineers—which operates dams in the basin—was a party to the case.

In 2018, the Supreme Court issued a 5-4 decision giving Florida a fresh chance to make its case under a looser legal standard. A new special master took charge—and in 2019 concluded Florida still fell short.

The four justices who would have killed Florida’s case in 2018—Clarence Thomas, Samuel Alito, Elena Kagan, and Neil Gorsuch—are still on the bench. Three of the five justices from the majority remain, and two wild cards have joined: Justice Brett Kavanaugh and Justice Amy Coney Barrett.

Listen: In Bloomberg Law’s Parts Per Billion podcast, hear from a Georgia farmer and local Florida officials who will be most affected by the Supreme Court’s ruling.

The issue for the justices is equitable apportionment, the legal doctrine the Supreme Court exercises when it divvies up water between states. When a state petitions the court to order a neighbor to reduce water use, it must show the neighbor is causing serious injury and the benefits of a court decree would outweigh potential harm.

“It’s not unheard of,” he said, “but there’s a difference in the water world between, ‘You can’t increase your water uses,’ and ‘Your existing water uses are too much; you’re going to have to curtail them.’”

That outcome could spur more downstream states to seek Supreme Court decrees in their own water disputes with upstream neighbors, said John A. Sheehan, a Cohen Milstein Sellers & Toll PLLC lawyer who has tracked the case for years.

But there may be an element of futility to the whole fight, said Georgia State’s Rowberry, who helped represent Florida in earlier stages of the dispute.

“The hard part about that is the climate is changing. Ten, 20 years from now, is that number going to make any sense?” he said, referring to a hypothetical usage cap on Georgia. “One of the challenges in law is it’s a blunt instrument to deal with the challenges you have.” 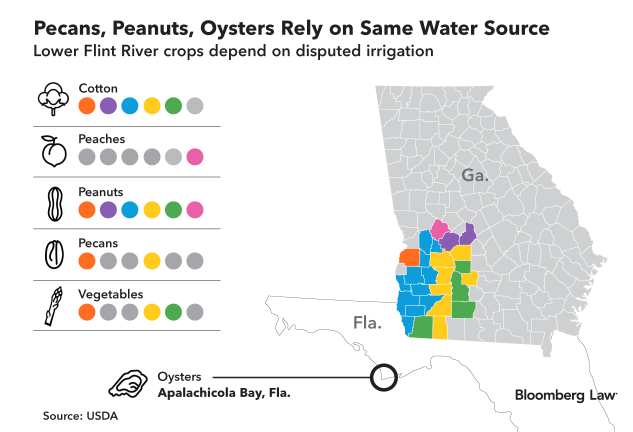 Both sides say that without enough water, hundreds of families stand to lose a rural way of life built for generations. They also share vulnerabilities to the impacts of climate change, such as longer and more frequent droughts or stronger and rainier hurricanes.

Irrigation is essential to productive farming in southwest Georgia—but the water comes from wells drilled into the Floridan aquifer, not the Flint River itself, locals say.

The center pivot irrigation systems embraced by farmers now are more efficient than the high-pressure systems that flung water high into the air over the fields from the 1970s into the 1990s, Perry said.

“In the old days, we would pump a gallon, but only 60% of it would reach the soil. Today, we can pump a gallon, and we can approach 90% of it reaching the soil,” Perry said.

When Florida complains about the increase of irrigation since the 1970s, it’s not more farms, Perry said, but farmers experiencing more frequent and longer droughts amid greater economic pressure.

“Most of the land is now irrigated, and it’s just because their lenders are hesitant to lend operating dollars each year if it was not an irrigated field, because that lender wants a return on their loan,” Perry said.

The oystermen of Apalachicola Bay already live with the upheaval that the Georgia farmers fear.

Shannon Hartsfield, a fourth-generation oysterman who has led the Franklin County seafood workers association, himself stopped harvesting wild oysters in 2012.

There were about 300 oystermen working in 2010, compared to four in 2020 before the state closed the harvests, he said. By that time, oystermen could expect to make only about $100 a day for their efforts.

A local trucking industry once supported by the oyster harvests is gone. Many of the people who worked on the boats or in the processing plants have moved out of state to find work. The shortage is so dire that the Florida Seafood Festival—a Franklin County event built around the bay’s harvests—now sources oysters from other states instead of its home waters.

“I don’t know how much freshwater we need. Mother Nature always took care of that in the past. But we do know we’ve got to have flows, we can’t have no flows, and that’s what we’re experiencing during dry years,” Hartsfield said. “We’re not asking for something that’s not there.”