An Indonesia official handles a seized pangolin on June 13, 2017. The animal is still in high demand in China despite a global ban on its traffic, but Chinese officials won't say how they dispose of seized animals or their scales.
Photographer: Gatha Ginting/AFP/Getty Images

China seizes tons of pangolin meat and scales each year as it cracks down on the nation’s appetite for the threatened species, but it won’t disclose where those materials go.

Though global trade in pangolins has been banned since 2016, China’s demand for the animals, prized for their meat and the scales used in traditional medicine, has not slowed even as legal supplies of the creature have dwindled.

Now environmental advocates are suing to divulge where those seized animals and scales eventually end up.

“Every year, there are a large number of seizures,” Sophia Zhang, a researcher for the China Biodiversity Conservation and Green Development Foundation, a prominent advocacy group in Beijing, told Bloomberg Environment. “Where do the scales go? This includes the rescue centers, which have a large number of rescues every year. Whether those rescued pangolins finally died or are alive, or where they eventually go, no one knows.”

The foundation is suing a wildlife rescue center in southern China to shed light on what happens to endangered pangolins and their scales once they are rescued or seized in the country.

China is the primary destination for the world’s most trafficked mammal, the scaly anteater known as the pangolin. The pangolin characteristically curls up into a ball when threatened, making it easy pickings for poachers in Asia and Africa.

An estimated 300,000 pangolins are killed annually to feed China’s appetite for the meat and scales.

All eight species of pangolins are protected under international laws and two are listed by the International Union for Conservation of Nature on its red list of critically endangered species.

A worldwide ban on trade in pangolins was unanimously agreed to at a meeting of the 182 nations of the Convention on International Trade in Endangered Species of Wild Fauna and Flora (CITES) in September 2016. China initially abstained from the vote, but later agreed on the ban.

“We believe that demand is not decreasing” in China since the ban took effect, Zhang said.

Prior to the ban, China legally imported some pangolin scales, mainly from Africa, for use in traditional Chinese medicine and the pharmaceutical industry. The ban would mean legal stocks are drying up.

China’s State Forestry Administration is officially in charge of certifying those legal transfers.

“The original stock which supplied pangolin [scales] legally to the market is decreasing, but an increasing amount of smuggling shows that the market demand is still there,” Zhang said. “The threat to pangolins has not been reduced since the ban.”

On April 9, the China Biodiversity Conservation and Green Development Foundation was notified by a court in Nanning, Guangxi autonomous region, that its lawsuit had been accepted against a wildlife rescue center that had refused to disclose information on what happened to 33 live pangolins and one dead one rescued in August 2017.

Also named in the lawsuit is the Guangxi state forestry office, which didn’t disclose what happened with those pangolins and others it had rescued or confiscated remains of between 2012 and 2016, according to the foundation’s court filing.

Since early February, the foundation has made several government information requests, similar to Freedom of Information Act requests in the U.S., to customs departments in Shenzhen and Shanghai and to the State Forestry Administration and its affiliated Northeast Forestry University. 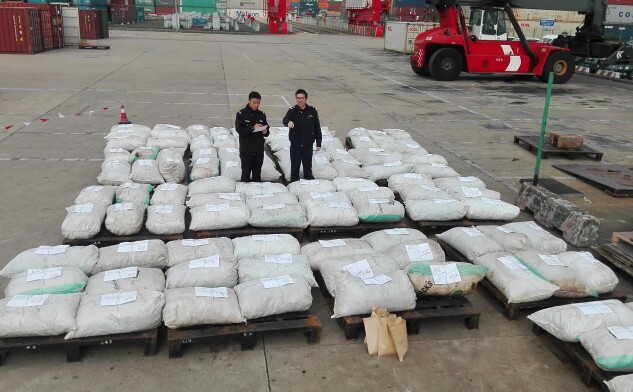 The foundation later discovered that scales seized in Shanghai had been sent to Northeast Forestry University in Harbin, and that the 11.9 tons in Shenzhen were destined to be sent there as well.

Environmental groups questioned why a university would need so many pangolin scales.

“The problem now is that this needs to be fully open and supervised,” Zhang said. “Only if we can trace the scales to the source, understand how much is in the inventory, what the use of the stock is, can we then protect the pangolin.”

Shenzhen Customs told Bloomberg Environment by fax that the scales were still impounded and would be turned over to the State Forestry Administration and two men initially arrested and charged for the smuggling case in 2017 have not been sentenced.

Authorities in neighboring Hong Kong made several seizures of pangolin scales in 2017, the largest which was 7.2 tons originating from Nigeria.

After contacting the Hong Kong Customs Department, Bloomberg Environment found out there were no convictions in any of the dozen cases for smuggling pangolin scales in the past two years.

The Hong Kong Agriculture, Fisheries and Conservation Department, to which Customs authorities turn over the scales, told Bloomberg Environment that some pangolin scales it receives are donated to local and overseas institutes for scientific, education, law enforcement, and identification purposes allowed under CITES. The rest of the stock is destroyed by dumping it in a landfill.

China appears to have no rule on destroying seized scales. The State Forestry Administration has not responded to repeated requests from Bloomberg Environment for clarification on the policy.

Northeast Forestry University refused to disclose any information to Bloomberg Environment about what was done with pangolin scales from Shanghai or plans for scales from Shenzhen, saying the information was confidential.

In a fax sent in response to Bloomberg Environment’s query on what was done with pangolins that are rescued, the Shenzhen Wildlife Rescue Center said that the information was confidential and it couldn’t give out statistics about rescued pangolins or what is done with dead ones.

Some groups are hoping that raising awareness among Chinese citizens about the plight of the pangolin will help put pressure on consumers.

The idea is similar to anti-ivory consumption campaigns, prodding citizens to become outraged enough to press the central government to halt domestic use of pangolins entirely.

China has recently closed all remaining ivory markets and Hong Kong is in the process of doing so, greatly limiting consumption—though not totally stopping—smuggling activity.

“These public campaigns and the seizures being exposed through the media may not reduce consumption in the short term, but it can surely raise awareness about endangered species and excessive consumption and illegal trade,” Sammi Li, senior communications officer for Traffic in China, told Bloomberg Environment. Traffic is a strategic alliance of the World Wildlife Fund and the International Union for the Conservation of Nature.

As with campaigns against the trade in ivory, groups such as The Nature Conservancy and WildAid are enlisting the help of celebrities for raising awareness.

They have launched poster and video campaigns against pangolin consumption in subways and airports in major cities such as Beijing, Shanghai, Shenzhen, and Guangzhou.

“In addition to raising awareness around pangolins through public education and engagement programs, we are hopeful that [domestic media] attention will influence and facilitate the push for a pangolin trade ban in China,” Seavy Chen, the organization’s communications coordinator out of Hong Kong, told Bloomberg Environment.