Online shopping has a waste problem.

Walk down any street on garbage day, and it’s easy to see bins overflowing with boxes from Amazon, Walmart, and others. But after years of investing to increase delivery speeds, the new arms race for e-commerce retailers is shifting toward packaging.

As online shopping accounts for a greater share of total retail sales, brands are being forced to design products around ease of shipping, rather than standing out on crowded store shelves.

Greenpeace criticized “Singles’ Day”—China’s version of a Black Friday shopping holiday—as an “ecological disaster for the planet,” creating over 300,000 tons of waste packaging.

“Our packaging innovations to date have eliminated over 500 million boxes and more than 244,000 tons of packaging materials,” Janin said.

The company wants to eliminate the need for “overboxing,” by having items arrive at its fulfillment centers ready to ship out in their original box.

Complaints about e-commerce packaging, sometimes called “wrap rage,” aren’t uncommon: Products that are hard to get open, or small products shipped in big boxes, are all over social media.

Really @amazon?? Please be more environmentally responsible. The shoes that came in a plastic bag could have fit in this box too. This tiny product in a huge box is wasteful even if I do recycle cardboard. pic.twitter.com/3DG2P8T4UC

While packaging changes to make things easier to ship might seem like small beer to most shoppers, it actually involves a lot of cost and design research and development.

“The shopping journey is changing,” said Jeff Jackson, vice president of Amazon account management at the toy-maker Hasbro, based in Providence, R.I.

For years, most brands simply took the same product meant for retail shopping and put it in a box.

“It was a disaster,” said Martin Wolf, director of sustainability and authenticity at Seventh Generation, a maker of environmentally friendly cleaning products based in Burlington, Vt.

“We probably left trails of laundry detergent leading up to every house that was delivered to,” Wolf told Bloomberg Environment.

He said a critical moment came when the company started offering two highly concentrated 40-ounce bottles, instead of the 200-ounce options being sold by their competitors.

“Every time Amazon touches the product, they charge us for it,” he said. So developing a ready to ship design was huge for us.”

Environmentally minded chefs have long criticized meal-kit makers like Blue Apron, Plated, and Hello Fresh for using a large amount of packaging to ship, say, a single tomato from one side of the country to the other.

At one point last year, Blue Apron was shipping over 8 million kits per month. If each kit contained two six-pound ice packs, that translated into 192,000 tons of freezer-pack waste per year, according to Mother Jones.

“It’s a disaster, all of the flexible packaging, styrofoam coolers, the ice and gel packs, none of that is recyclable, said Anthony Rossi, vice president of business development at Terracycle, a recycling company specializing in hard-to-recycle items.

Even though Blue Apron claims the packs are themselves recyclable, cleaning them is a hassle—and many recyclers don’t want the plastic bags anyway.

“We provide detailed instructions to our customers on how to recycle their packaging, as well as a locator tool we launched in partnership with Earth911,” said Nisha Devarajan, a spokesperson for Blue Apron.

“Going forward, we have a dedicated team that is focused on exploring and testing more environmentally friendly solutions with a focus on further reducing the amount of packaging used,” she said.

Last year, Amazon shipped more than 5 billion items worldwide through its Prime service alone. It takes a lot of trees to produce that much cardboard.

Measuring the sustainability impacts of e-commerce is notoriously difficult to pin down. As more people shop online, they might use their cars less. And delivery services have immense incentives to find the most efficient routes, keeping their fuel costs and emissions down. 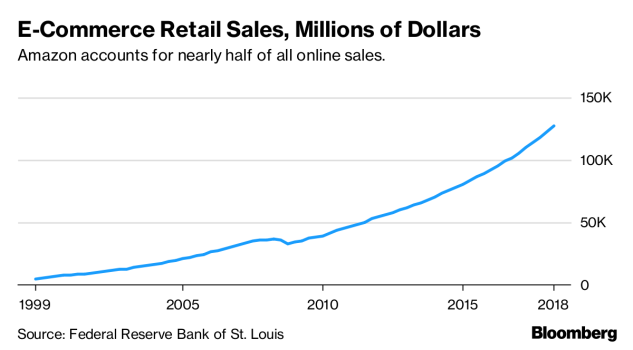 But online sales are predicted to double—to around 25 percent of U.S. retail sales within the next decade—and that translates into a literal mountain of cardboard, as well as emissions from freight services.

“Our research suggests that although online shopping did save some trips to the store, the amount of vehicle-miles-traveled (VMT) did not decrease,” said Ardeshir Faghri, a professor of civil and environmental engineering at the University of Delaware.

“It doesn’t seem like e-commerce is helping the environment; the data doesn’t back that up at all,” he said.

In terms of packaging itself, e-commerce may not suck up as much cardboard as previously thought, according to Brent Lindberg, head of Fuseneo Inc., a package design firm working with Amazon.

“There isn’t much more demand for corrugated than there used to be,” he said

Lindberg says recycling rates for cardboard have increased from 53 percent in 1995 to 93 percent in 2016.

“In many cases, they’re just moving the box from back of store to doorstep,” he said.