are about to consider sweeping supply restrictions just days after an alliance of most of the world’s biggest crude producers largely growing alarm over a worldwide glut.

The , which oversees crude output in a state that than every OPEC member except Saudi Arabia, is scheduled Tuesday to discuss a production clampdown in response to the historic price slump. The debate will unfold in the wake of a weekend accord to slash output by OPEC, Russia, Mexico and a who’s-who of the world’s major crude suppliers.

The U.S. was conspicuous as a hold-out on mandated cuts, instead leaving it up to individual companies to steer production decisions. That makes the Texas debate all the more significant: if the state was a sovereign nation, it would be the world’s fourth-largest source of crude.

Still, the probability of Texas reviving output limits that haven’t been instituted since the early 1970s is low, according to , KPMG International’s global head of energy. Most of the state’s oil explorers oppose such a step and many Texans would bridle at that sort of invasive government action, she said.

“It’s a very small minority that wants to take action so it’s hard to imagine the commissioners” will impose limits, Mayor said. “It’d not only be un-American but unimaginably un-Texan.” 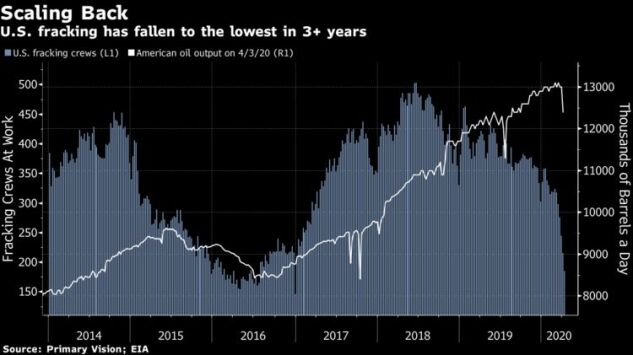 The unprecedented agreement by the OPEC+ alliance and the Group of 20 nations to curtail almost 10% of global oil output wasn’t enough to offset pessimism about the Covid-19 outbreak’s deleterious impact on energy demand. Brent crude, the international benchmark, was little changed at $31.47 a barrel in London.

In Texas, the stakes are high. The quota debate pits a pair of Permian Basin upstarts founded by a father and his against a long list of their shale-industry peers. The antagonists include and Parsley Energy Inc., with a combined market value of $16 billion, against an assemblage that features Exxon Mobil Corp., and Chevron Corp., which are worth 20 times more.

Most of the other prominent Texas shale explorers -- including EOG Resources Inc. and Diamondback Energy Inc. -- have lined up on the side of the giants, according to a trove of public commentary filed with the railroad commission.

In one of the only states that was once an independent nation, the heavy hand of government intervention has long been anathema. But the freefall in oil markets spurred by Covid-19 and a global oversupply has been so swift and severe that some in the Lone Star state are re-thinking their devotion to the doctrine of laissez faire.

The elected, three-person commission that until a few weeks ago kept a relatively low profile faces a daunting task in trying to find a way to discharge their duties and satisfy deeply divided stakeholders.

In the weeks since crude prices crashed to the lowest levels in decades, a motley assembly that includes a lame duck regulator and a third-generation crude driller has revived discussion of a heretofore unthinkable remedy: state-imposed supply quotas.

Railroad Commissioner and Pioneer Chief Executive Officer have been the most vocal advocates of mulling production limits. In the oil industry, free markets have been an illusion, Sheffield said, and supply caps -- known as “pro-rationing” in the lexicon of the railroad commission -- ought to one of the “tools in the toolbox.”

There has “never been a free market in oil,” Sheffield said in an interview. The commission exercised such powers before and after World War II, he noted. “If the commission doesn’t approve it we’re going to have $10 oil and a lot of my peers are going to go bankrupt.”

On Monday, Sitton appeared to soften , issuing a press release to say that while he favors considering quotas, he still has “many reservations” and didn’t know how he would vote.

But calls for pro-rationing are running into some big obstacles. Chairman and Commissioner have expressed reservations over the proposal.

“The chances of Texas agreeing to pro-rate are low,” said , an analyst at Edward D. Jones & Co. Still, she said, “it’s very telling of the times that we’re following this commission meeting as if it’s an OPEC meeting.”

Major industry groups, including the American Petroleum Institute and the Texas Oil and Gas Association, have said market forces should dictate who wins and loses in an era of catastrophically low crude prices.

“For the commission to get back into the game of market management, it would probably have to require a sea-change in how producers think of themselves,” said , managing director of Washington, D.C.,-based ClearView Energy Partners. “They’d have to think of themselves as permanently in surplus with no hope of a market solution.”

In the Permian Basin, the sprawling oil deposit in West Texas and New Mexico, Concho Resources Inc. and other explorers already to blunt the financial pain. Concho opposes mandated limits.

“The industry is saying we know how to shut in wells in an orderly fashion, so let the market take care of it,” Mayor said.